The stud sold all 31 bulls for an impressive new average price.

The Crowley family of Tycolah Poll Hereford stud more than doubled their 2020 bull sale average when the Barraba-based on-property auction achieved a record result on Friday.

The 24-month-old son of Allendale Bingara K184 was a heifer's first calf who had been used with Tycolah stud heifers before his sale appearance.

Mr Watters was previously a sheep farmer in South Australia but was looking to build his small commercial Hereford herd up to 300 or 400 in the next couple of years.

"He is a magnificent bull and has got fantastic constitution and muscle structure and we are very excited to be bringing him down to Victoria in September/October," he said.

"We are looking at not only true to type and making sure we have the right constitution of the animal but we are also looking at the different studs bringing in new bloodlines with high breeding values.

"We bought quite a lot of stud cows and heifers from the likes of Wirruna at Holbrook.

"We are not in any rush but if we start with really good genetics we can be years ahead rather than just grow numbers without focusing on those attributes." 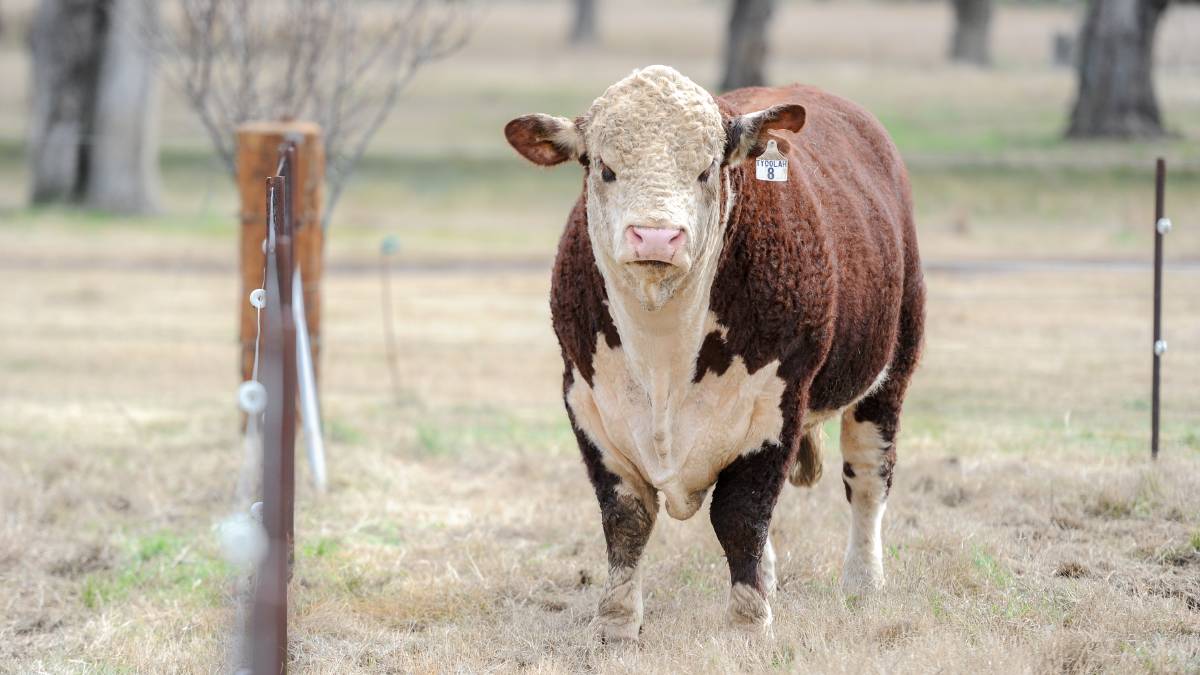 Bidding kicked at $20,000 for the first three bulls of the sale with the second lot, Tycolah Southland Q010, making $32,000 to Glenellerslie Hereford and Poll Hereford stud at Adelong and lot three, Tycolah Sundown Q053, making $20,000 to Bernard Hore and Co, Echarina, Holbrook.

The first son of Tycolah Queenscliff N029 who was born on mulga at the back of the Barcoo River was named Tycolah Sand Dune Q058 and sold for $22,000 to C and J Latimore, Wauchope.

Unlike the other recent whiteface sales, large bulk buyers didn't account for the majority of lots which allowed for a wider spread of 23 successful bidders.

AuctionsPlus accounted for three bulls as did Brook Proprietor, Adria Downs, Birdsville, Queensland, for an average of $6000.

Mj and ML Nott at Boggabri secured two bulls, along with Wannan and Winter, Gunnedah, and R Simson and Son, Quirindi.

Stud principal Steve Crowley was relieved with the sale result and pleased that there was still value priced bulls for local clients.

"It helps us recover a little bit from the drought and it gives us a bit of incentive to go on and improve," he said.

"It gives you a little bit more confidence in the breed and I think there is a bit more of a swing back to Herefords."

The sale was conducted by Nutrien Livestock with Paul Dooley auctioneer.

Read the full report in The Land next week.