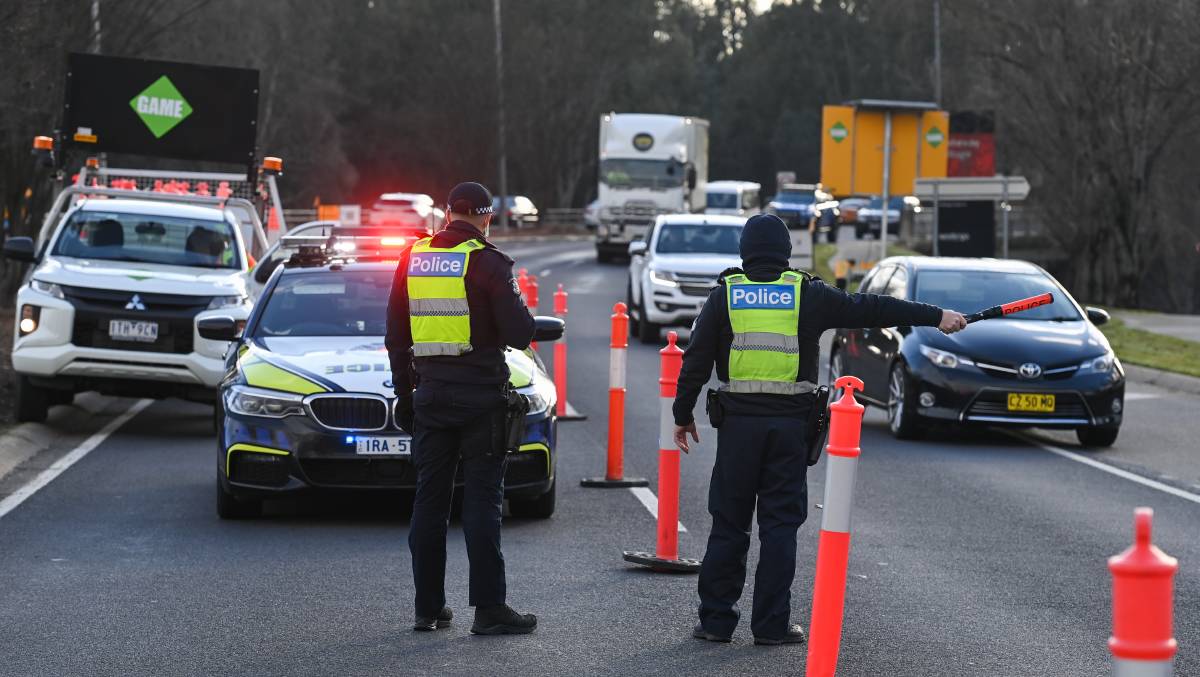 DILIGENCE: Checkpoints were set up on the Lincoln Causeway to check the licences or travel permits of people in cars with NSW licence plates. Picture: MARK JESSER

Victoria has effectively shut the border to NSW and the ACT, declaring them red zones under the travel permit system from 11.59pm on Sunday.

So how do you know if you live in a border bubble and what rules apply to those who do?

Do I live in the bubble?

Confused about which border bubble? You're not alone.

The border bubble in place this time around is the same is the December bubble, consisting of:

Do I need a permit?

If you live within the border bubble you do not need a permit to cross into Victoria. You do however need to show identification and proof of your address.

Can I travel to Melbourne or other parts of Victoria?

Yes, but authorities have asked you don't.

Service Victoria has confirmed online border bubble residents do not need a permit to enter Melbourne if they haven't travelled into wider NSW.

"Residents of the border bubble communities do not require a travel permit to travel to metropolitan Melbourne or further afield in regional Victoria, unless they have been in an orange or red zone outside of the cross-border community," advice says.

However the Department of Health has asked residents from both states to stay within the bubble on both sides.

"If you are entering Victoria as a NSW cross-border community resident, authorities ask you to stay within the Victorian cross-border area at all times," they said.

"If you are entering New South Wales as a Victorian cross-border community resident, stay within the NSW cross-border area. If you travel beyond this area, a red zone permit will be required for re-entry into Victoria."

Can I travel outside the bubble in NSW and then return home?

If you live in NSW and travel beyond the border bubble in NSW you will have travelled into a 'red zone' and will not be allowed to cross the border unless you are eligible to obtain a red zone permit in order to cross into Victoria.

Currently, red zone permits are only available to Victorian residents unless an exception or exemption applies. Workers in select industries are eligible for a specified worker permit.

If you live in the Victorian bubble and travel beyond the bubble in NSW, you will have to obtain a red zone permit to return home and quarantine for 14 days.

Will a hard border be established?

At this stage authorities have not ruled out establishing a hard border, but the Victorian government and Victoria Police have both praised the current soft approach.

Mr Foley said the current roving border patrol was highly efficient, but if police needed more resources to set up more checkpoints they would.

"VicPol's operational advice is based on learnings from 2020 and learnings brought across earlier this year that a highly-mobile, unpredictable, technology-driven arrangements.... have been more effective," he said.

So, hopefully that means the current state of roving patrols, occasional checkpoints and technology remains and a hard border can be avoided.

The story Where can I go? Your NSW-Vic border closure questions answered first appeared on The Border Mail.