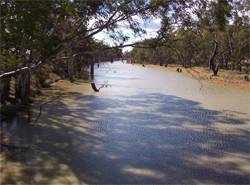 The Victorian government says it will continue to consult with irrigators on the Lower Broken Creek around Numurkah, as it further develops rules for intervalley water trades between the Goulburn and Murray Rivers.

"We listened to the extensive feedback from communities and now we want to trial interim rules for a further season so we get the best outcome for the lower Goulburn River while not disadvantaging irrigators," Mr Wynne said.

The operating rules will allow flows in the Goulburn of about 40 gigalitres a month, but using short releases of higher flows between longer low flow periods over summer and autumn.

But Mr Wynne said the current exemption for the Lower Broken Creek would continue while a long-term rule was developed.

Farmers in the Numurkah area said they feared the Department of Environment, Land, Water and Planning wanted to restrict irrigators' access to the Goulburn River from August 15 until the end of October.

Although the creek receives some unregulated inflows from the upper catchment, its main source of water is from the Goulburn.

The proposed changes follow a state government decision in December 2019 to place restrictions on tagged use from the Goulburn to the Murray, to create a level playing field for all types of trade.

Irrigators have been given a temporary exemption since that time while longer-term options were explored and tested.

A tagged water access entitlement is one registered in one zone, but under which allocation is able to be extracted in a different place.

The point of extraction is 'tagged' on the register.

Mr Wynne said during consultation, stakeholders were united on the need for the government to make the interim restrictions on tagged water use permanent, ahead of their expiry at the end of November 2021.

That would be implemented to keep a level playing field for all types of trade and to prevent tagged water being used to get around trade limits.

But Mr Bryant said all irrigators drawing water from Broken Creek were happy to have an account limiting extraction to on-farm use only.

"It's a good thing they haven't stopped us using the water," he said.

"But I suspect we are going to be sitting around the table again, having the same discussions."

He said it appeared authorities were "making a mountain out of a molehill".

"We are supplied by the Murray and Goulburn system, we get Murray allocation but we are on a Goulburn permit system," he said.

"Last time, they definitely were good, they gave us plenty of time to discuss it, hopefully that happens again."