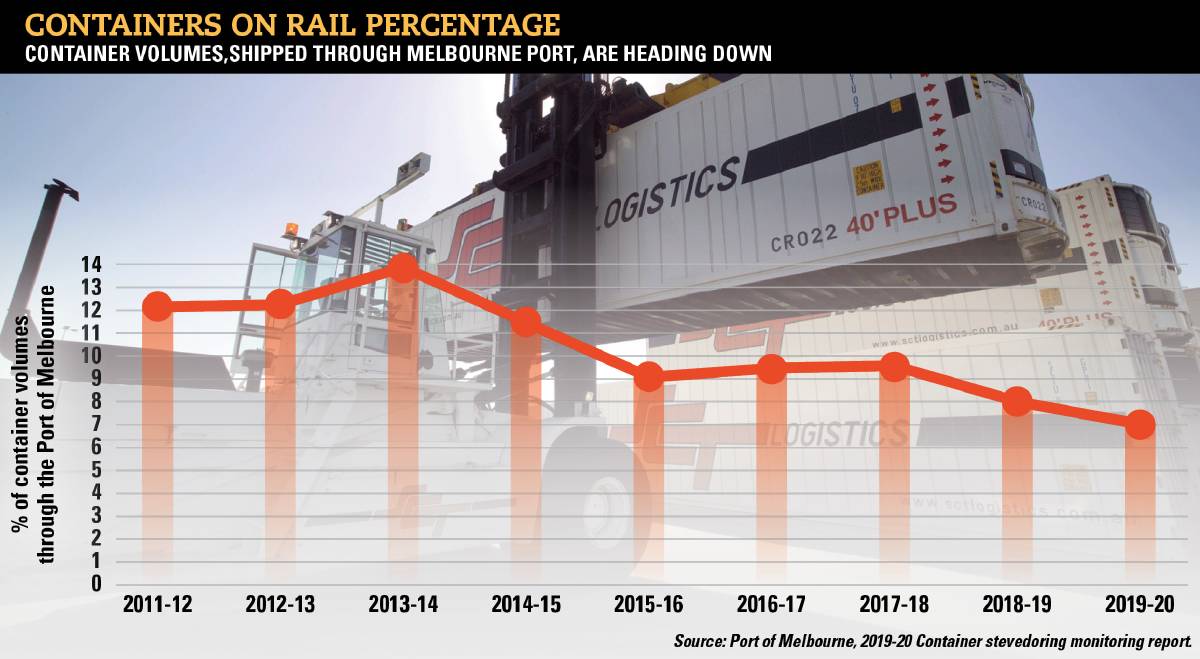 MODE SHIFT: There's a mode shift reversal, in north-west Victoria, as exporters move away from rail and back to road.

Grain, hay and pulse exporters from Victoria's north-west are moving thousands of containers from rail to road, citing cost as the main factor.

That comes as Victorian Ports and Freight Minister Melissa Horne has flagged the end of the Mode Shift Incentive Scheme, aimed at moving freight off roads and onto rail.

The government set aside $3.6m for the scheme in the last state budget.

Figures seen by Stock & Land show Johnson Asahi, at Horsham, shifted from rail to road to move 8000 twenty-foot equivalent containers of hay a year about 18 months ago.

Other companies have also gone back to road, or are about to make the switch.

Wimmera Grain Company general manager Chris O'Bryan, Rupanyup, said his company had decided to move back to road, from the next financial year.

"I don't think containers on rail are the most efficient way of moving freight from point A to B," Mr O'Bryan said.

WGC moved from road to the WCL intermodal, Dooen, in 2013.

On average the company was sending about 35,000 tonnes, or 1300 containers, of pulses by rail to Melbourne each year.

"It was primarily for efficiencies, and weight gains, within the containers - road couldn't handle those capacities," Mr O'Bryan said.

But he said that had all changed with the introduction of A-doubles.

"We have a business to run, so the cost benefit is significant," he said.

"Don't get me wrong, rail is an effective way of carrying a lot of containers at one time and we understand it gets trucks off the road."

He said uncertainty over the future of the MSIS , which is renewed every year, was also a contributing factor.

When it was originally introduced, the four operators were paid a subsidy of $100 a twenty-foot-equivalent container, but that figure is now down to $81.45.

"If MSIS goes, all of a sudden you are looking at an eight per cent increase in your container fee," Mr O'Bryan said.

He said he'd continue to talk with WCL about its rates.

"Nothing is off the table, so to speak, but for our company, efficiency and dollar wise, the decision is made."

It now moves between 350 and 400 containers a year, mainly 40 foot boxes, by road to the Port of Melbourne.

Cereal grains, including oats, used to go through the WCL terminal, at Dooen, near Horsham.

Ms Cadzow said the switch had nothing to do with WCL, which had provided an excellent service.

Blue Lake would only go back to rail if it was cheaper.

"It's a massive cost factor and businesses with low margins need to look at saving money, wherever they can," she said.

"Freight is a huge component of our costs."

At a recent state budget hearing, Ms Horne said the MSIS was part of the jigsaw to shift more freight to rail.

Speaking at the Public Accounts and Estimates Committee, Ms Horne said the MSIS was a "vital" programme that supported the behavioural change behind the shift from road to rail.

She said intermodal hubs at Laverton, Altona and Somerton, the rail freight shuttle service and the Port of Melbourne on-dock Port Rail Transformation Project would eventually replace the need for the MSIS.

He said the company, which runs both road and rail transport, was not against the extension in HPFV routes as long as trucks delivered freight to intermodal hubs.

"The consequence of HPV's will be that rail freight will evaporate alarmingly," Mr Eryurek said.

"The decisions that have come out will increase the gap, between rail and road.

"The state government has made a pledge to reduce carbon emissions by 2030, but - in their words - the biggest contributor is using trucks to carry freight."

He said initiatives like the Port Rail Transformation Project were to be applauded but were only a first step, as they would take time to implement.

"In one breath, the minister keeps referring to the MSIS as a bit of a bugbear, but we see it as an equalisation program, to get us to the competitive level we need."

He said he understood the decisions being made by processors and freight forwarders.

"We'll be all crossing our fingers, thinking when the Port Rail Transformation Project occurs they will come back to rail," Mr Eryurek said.

"But, as we know, in regional areas decisions are not made lightly.

"When they do go to a mode they stick to it."