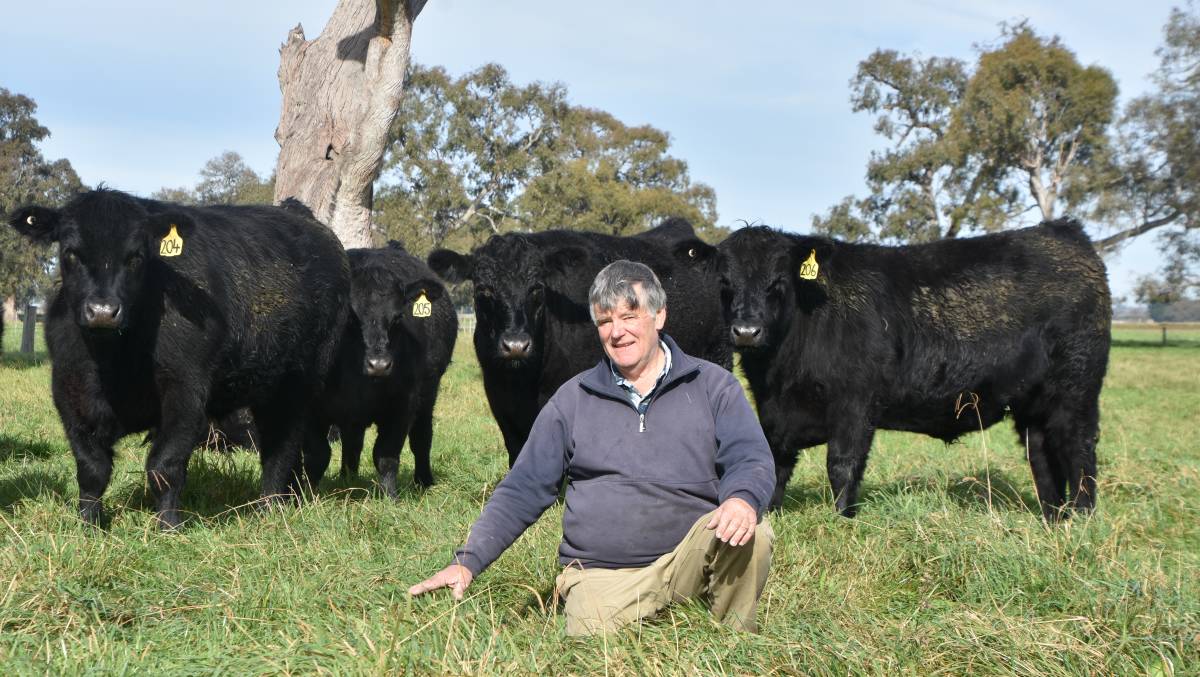 VETERAN: Barry Hollonds, Sale, has ran cattle at his Gippsland property for 30 years and is particuarly interested in the carcase attributes of Anugs.

The Gippsland farmer turns off about 200 cattle annually.

Eastern Victorian cattle breeder Barry Hollonds was always interested in pursuing a career in agriculture - but his father had other ideas.

The third oldest of four brothers, Mr Hollonds was no stranger to cattle when he entered the industry some three decades ago having grown up on his parent's Montgomery dairy farm.

"My father said to me when I was at school 'I'd like you to go out and do a trade' and in hindsight I'm glad I did, because I was able to mix with other people and learn how business operates," Mr Hollonds, Sale, said.

Outside farming, he completed a floor covering and finishing apprenticeship and later went on to run his own flooring company in his hometown.

It was this business that ultimately funded the purchase of his first Gippsland property in the Macalister Irrigation District, the largest irrigation area south of the Great Dividing Range.

He now owns about 100 hectares and turns off 200 steers per annum.

"As a result of the income I produced being a contractor, it enabled me to be able to buy a farm," he said.

"It's getting harder and harder for young people to enter the industry so I appreciate how tough it is for them.

"I haven't inherited anything ... but in the farming community, some people are very lucky to have inherited the family farm but for me, that was not the case."

Since retiring from his trade a decade ago, Mr Hollonds has switched his attention to full-time farming, buying steers at local store sales including Bairnsdale and the annual Heyfield feature sales and growing them out.

His commitment to beef helped him win three carcase competitions at Beef Australia in Rockhampton, Queensland, in May, including Meat Standards Australia's award for the highest indexing carcase.

That category alone had more than 3.5 million carcases graded, with Mr Hollonds winning the competition with an Angus steer, 340 kilograms, which he bought at a store sale in Gippsland.

"Years ago I used to buy weaner calves predominantly out of Omeo and Benambra but I eventually went away from weaners because at eight to 10 months, it takes too long to turn them into a 600 kilogram bullock," Mr Hollonds said.

These days, he frequents the store sales and attempts to select cattle around the 500kg mark, aged between 14-18 months.

Mr Hollonds admits he tries to buy his cattle from a select group of about half a dozen vendors in the area, but in recent months competition among feedlotters has made it more challenging to select suitable cattle.

"Feedlotters are knocking the average farmer out of the equation because the farmer who doesn't lot feed is taking six to 10 months to fatten steers where feedlotters can do it in 90 or 100 days," Mr Hollonds said.

"They're turning cattle over twice as quick as the average grass-fed farmer."

His interest in good carcase attributes has led to him establishing a new trial with a local butcher in Gippsland who will stock his beef and sell it direct to the public.

The 66-year-old also ranked highly in another Beef Australia class - a competition of three steers weighing 260-340kg - coming first in Victoria and sixth in Australia with 270 grading points out of 300 with a 335kg Angus steer.

He also came first in the export chiller steer class category with a 400kg steer which came fifth in Australia.

In the depths of winter, Mr Hollonds carries about one steer to the hectare and believes responsible stocking rates are a large part of his success.

"I have very good pasture including your typical winter variety rye grasses and of course the old rule is not to be overstocked," he said.

Life post-retirement has allowed Mr Hollonds to focus his attention to the "everyday husbandry work" of running a profitable operation.

"You have pasture renovation, fencing, weed control, irrigation and then the health and well being of your livestock," he said.

His herd mainly consists of Angus cattle which are often on-sold to Greenham Gippsland at Moe, and were previously sold to JBS.

"The Angus breed is becoming well known for their good yield and for not being as fat at their finishing period, meaning there is more muscle and that leads to higher indexes," Mr Hollonds said.

"All these abattoirs offer you a price but if you go above a certain index, you then get a bonus."

He said the carcase score bonus was achieved on almost all of his steers, equating to about $50 extra a head at the time of processing.

"It's very important that we find steers with good temperament, good bone structure and it's also important to know what vendor they have come from and their bloodlines," Mr Hollonds said.

"In the last few years, agents have started to display not only the vendor details but also what bulls they're by and this is very important information which helps me inform what bloodlines are coming with good traits."

Droughts in central Gippsland in the last decade have inevitably challenged Mr Hollonds, forcing him to destock on one of his dry blocks and carry more on his home property on the MID.

"I didn't have cattle on that block for more than six months and I really relied on the irrigation on my home block to support those animals," he said.

"Now I'm running about 50 head there so stocking rates in my area have vastly improved in the last 12 months."