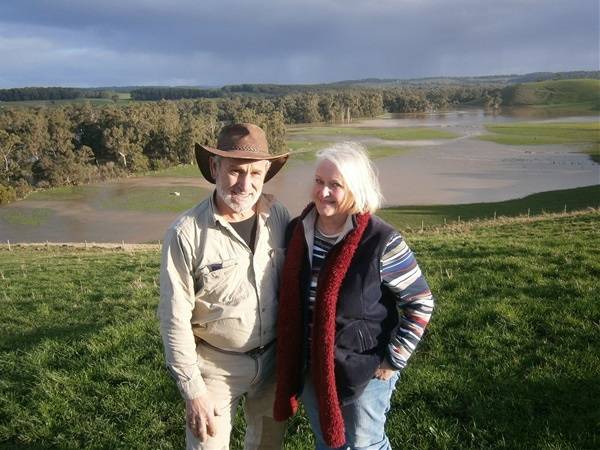 LAST FLOODS: In 2012, Ripplebrook beef farmers Joe Seawright and Christine Johnson recieved 102 millimetres of rain across two days. The resulting water spilled over from the Lang Lang river onto the flats behind, where two billabongs are also located.

The Bureau of Meteorology has warned Gippsland residents to brace for damaging winds, heavy rain and the worst flooding in nearly a decade.

The BoM is predicting falls of up to 250 millimetres of rain and wind gusts of up to 130 kilometres per hour.

"While rainfall amounts and wind speeds of this strength, particularly out of the south-east, aren't typical for Victoria, June is the most common month to see east coast lows develop," Mr Delamotte said.

"The last time we saw flooding of this magnitude, through parts of west Gipplsand, was around 2012.

"So this weather is quite unusual, for this time of year, despite the fact we do see east coast lows, most commonly in June."

"As we move through the afternoon, we are going to see the southeasterly winds strengthen and the rainfall strengthen and increase through Gippsland, but more broadly through central and eastern parts," Mr Delamotte said.

"We expect those really strong winds and persistent rain to continue right through Thursday morning, before easing on Thursday afternoon,"

Mr Delamotte said falls of between 150-250 millimetres of rain were expected, over the western and central Gippsland ranges.

Wind gusts of up to 120-130 kilometres an hour could be expected, on the Alpine peaks.

"We may see flooding develop from as early as Wednesday night, but more likely to be on Thursday," he said.

"We may see some moderate to major flooding developing about catchments through western parts of Gippsland during Thursday."