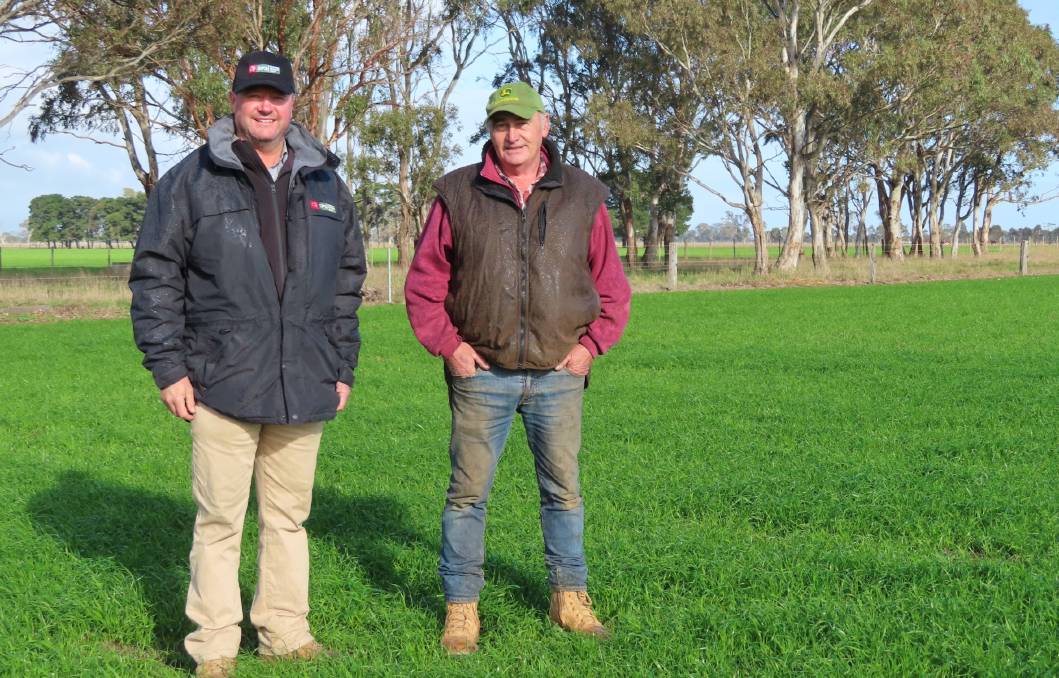 FEED ON HAND: Central Gippsland graziers Simon and Jim Fleming have trialed the new ryegrass and say it offers a number of benefits.

A Victorian farmer has backed a new variety of hybrid ryegrass which has created plenty feed for his livestock over the past couple of seasons.

Mohaka AR37 hybrid ryegrass is a new variety of pasture that is said to have excellent cool seasonal growth rates and a later flowering date for a high-quality feed in late spring.

Jim Fleming, a grazier from central Gippsland, took the opportunity to integrate the new variety and became one of the first farmers to plant the AR37 hybrid last year.

Mr Fleming said he was impressed by its quality, leafiness and later heading date and said it maintained its quality well into the season.

"We usually sow in autumn, but with reports of a wetter spring and summer coming, we took the risk and it turned out really well," Mr Fleming said.

"The paddock was sprayed out and direct drilled coming into spring and the new pasture established very quickly and put up a nice bit of feed.

"Overall, we're looking to maintain quality in our pastures and these new and improved hybrid ryegrasses fit into our program really well."

The Mohaka hybrid ryegrass is expected to persist for three to four years, which may potentially make it a longer lasting, and be a better alternative to other Italian ryegrasses.

Recently released by Stephen Pasture Seeds, Mr Fleming said he was able to sow up to 100 hectares of annual and perennial pastures and cereals to provide year-round quality feed for his cattle.

"An early sown annual can be pretty fast to put up winter feed, but if you have an already established hybrid ryegrass, it's putting up a feed bank for the winter as soon as the autumn rains come," he said.

Mr Best also said that the hybrid has a strong second year performance and that the AR37 endophyte provides a high tolerance to rust and is proving to be very flexible.

"In my mind, it has the potential to reset the Italian ryegrass market by providing high rainfall environments with a genuine multi-year option," he said.

"We are already seeing it perform well on lamb and cattle finishing operations, dairy farms and in cropping situations where it is used for grazing and hay and silage production as well.

"Most farmers who try it come back for much more the next year."