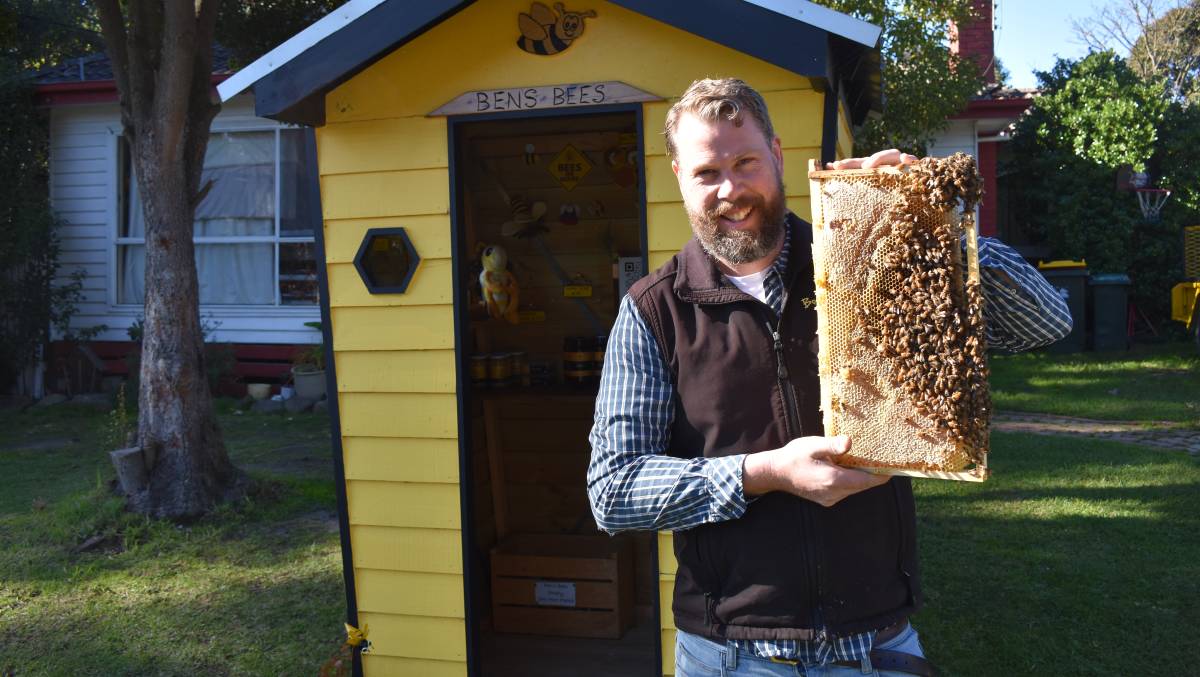 Ben Moore's operation, Ben's Bees, has become a staple honey brand in his community of loyal customers who flock to get some of his handmade products and produce.

A Victorian beekeeper is crafting organic produce for his local community, while at the same time educating about the vast benefits of bees.

Mr Moore sells his produce in 12 stores, as well as through his website and at-home pop-up shop, with the aim to get more Victorians aware about bee preservation.

It all started at the age of 14, when he saved up $60 picking fruit to be able to afford his first beehive.

Fourteen years later, he established his business Ben's Bees, which has since grown exponentially and become a popular staple in his area.

"I started keeping bees when I was 14 and I was always fascinated by bees, so I said to Mum and Dad 'I don't want a puppy or a kitten, I want a beehive'," he said.

"I saved up my own money by doing fruit picking and brought myself my own beehive.

Mr Moore has more than 340 colonies that he keeps on his Blackburn property, as well as on properties in Gippsland in an agistment situation.

However, he said seasonal changes and periods in the day affected his beekeeping operation due to rain, nightfall and cold weather.

"[This season] is obviously very cool and wet and has had high humidity, so it's been very different for me," he said.

"It's been very up and down, some areas have been great but in other areas the bees have been difficult - I've had to nurture and look after them.

"But as far as a business perspective, it's probably been busier than ever."

While many businesses had struggled during the COVID-19 pandemic, Mr Moore said business had boomed, which he attributed to the unique and crafty marketing strategies he employed.

In addition to social media and website marketing, he planted an honesty box out the front of his premises to allow people within his five-kilometre radius to partake in his venture.

He said the honesty box proved to be popular with residents who flocked to his house to grab some healthy remedies and homegrown honey.

"I sell it in three ways, online, through shops - there's approximately a dozen shops that I sell to - but the third way is very unique and it's through an honesty box system," he said.

"Basically, someone comes to my address, and there's kind of like a cubby house outside and they grab the honey, put the cash in the tin, and off they go.

"During last year's lockdown, people within the five-kilometre radius could walk and have something to do and something to see and it's become very popular within the community."

Over time, Mr Moore has seen many changes, but he has noticed one thing - more and more people are engaging in bee-friendly practices.

He also works in educating the community to understand the importance of bees by speaking at schools and helping others create their own beehives and understand the necessity of bees.

He hopes that by educating the community on the importance of bees, they will be more inclined to adopt a bee-friendly approach in their everyday life.

Mr Moore said the community had become more understanding of bees and had been proactively working towards protecting them.

A man of many talents, he also provides a service of bee and swarm removal in all parts of Victoria.

"If we go back eight to 10 years ago, if someone got a swarm of bees in their front garden, they'd quite often call pest control to kill them," he said.

"Now, we get called out to save them, and it rarely happens that they are killed when they can be easily saved.

"Generally speaking - and I've seen that shift for over a decade - now more than ever the awareness of bees [from the community] is incredible."

Mr Moore also offers nucleus hives for sale, which he said were available on a seasonal basis.