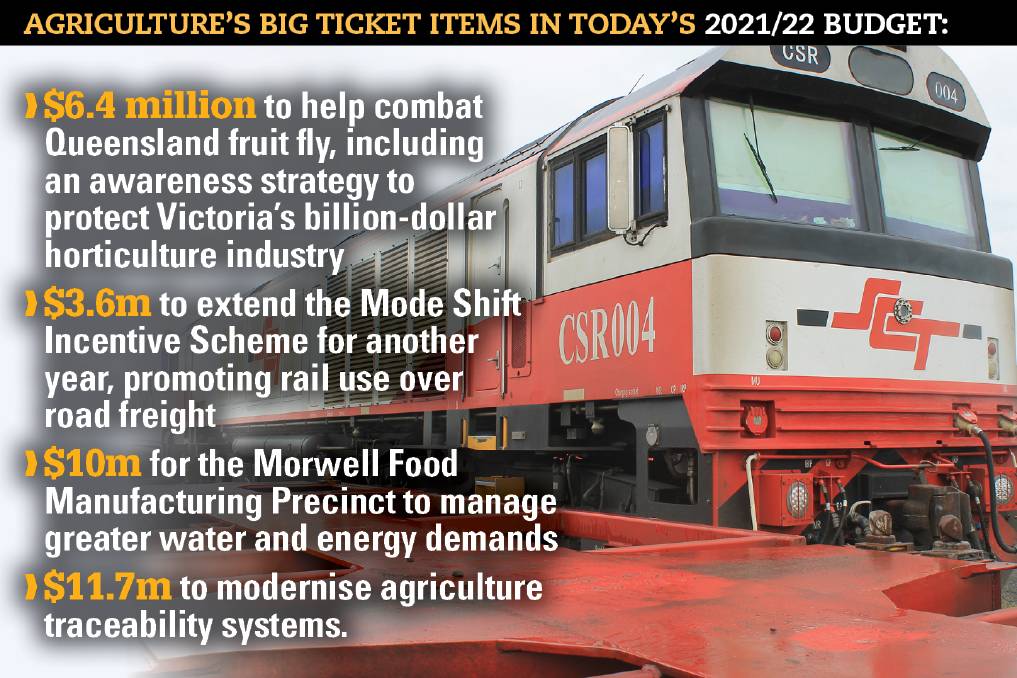 BUDGET 2021: Some of the ag spending to be revealed in today's state budget.

The state budget will confirm a further 12-months funding for the Mode Shift Incentive Scheme.

The state government will confirm a further 12-month extension to the Mode Shift Incentive Scheme in today's budget, along with $10m funding for a new Morwell Food Manufacturing Precinct and $11.7m for an upgraded food traceability system.

But rail operators say while a further $3.6 million to extend the MSIS for another 12 months is appreciated, the government needs to make a longer-term commitment.

The MSIS offers a small rebate to three Victorian freight operators, and one from NSW, for the cost of each container they put on rail instead of sending it by road.

The government claims the scheme will help move up to a combined 42,508 containers by rail - taking the equivalent of 28,000 truck trips every year off country roads.

Rail Futures Institute president John Hearsch said it appeared the government had taken the actual volume of containers, moved in 2019/20, projected the same number next financial year and converted that to "theoretical truck trips.

"It's a small subsidy that helps these services remain viable in the face of ongoing strong road competition," Mr Hearsch said.

"Compared to the massive financial underpinning for rail passenger services, it's almost infinitesimal."

The subsidy has been steadily reducing since 2014 when $5m was offered to the four operators.

WCL general manager Tim Guidera said the decision left the scheme "in limbo", when what was required was a major overhaul.

"The recovery dollar rate is unchanged from last year, so it remains at 20 per cent below the rate of a decade ago.

He said no change to the cap meant there was no incentive to offer to new clients.

"Continued highway upgrades that allow more efficient trucks with longer and heavier payloads to transport containers to Melbourne will continue to gain market share over rail options," he said.

"The community will not gain the benefits that rail services provide of reducing road trauma, road congestion, road wear and tear and carbon emissions as more activity will go on road."

MSIS provides a discount to exporters for each container they transport on rail.

The Initial MSIS subsidy rate of $100 per 20' container has reduced by 20 per cent over the past decade, rather than increase in line with inflation each year.

Mr Guidera said WCL activity was capped to 12,000 20' containers each year, to qualify for the MSIS incentive.

"Rail volumes by existing clients in the Wimmera consistently exceeds this cap each year so there is currently insufficient incentive to pass on for all prevailing client activity," he said.

"This year WCL will rail more than 14,000 containers to the Port of Melbourne but this is well down on the 20,000 containers we railed in a prior bumper harvest year."

He said there was ongoing uncertainty over the continuation of the scheme.

"There are significant export projects proposed for the region that are now looking at their transport options.

"Rail would be better placed over road if there was significant and guaranteed incentive available to these potential clients to select rail over road and avoid the community costs the latter option will invariably present."

WestVic Container Export managing director Warwick Loft said the company railed about 50 TEU a day in meat and dairy products and aluminium, from Warrnambool to Melbourne.

"This support is an integral part of the business for the four recipients - that's what it is, support," Mr Loft said.

"It needs to be ongoing for three or four years.

"Over the last few years the percentage of funding to WestVic has been slowly dwindling, and it wouldn't want to dwindle too much more."

'It protects us in the low volumes, but as volumes grow, the need for it is not so necessary," he said.

He said giving a longer-term commitment to the subsidy would be of great advantage to WestVic.

'What we are doing is thinking short term, now the argument is there will be significant savings with the redevelopment of the Port of Melbourne," he said.

"That won't be the case for us, because our products end up in any one of the three Melbourne terminals."

He said WestVic had been severely affected by recent upgrades to the Warrnambool line, which had seen the company's rail usage drop by 30 per cent.

That work should be finished within weeks.

"What's come along in the meantime are A-Doubles, which have a major impact on the roads," Mr Lofts said.

"That will be borne out in the next 12 months because they are only relatively new on the road, and they will get bigger and bigger.

"The beauty of it all is that, at the end of the day, two members of the crew come on board, they start up the train, and away they go.

"There are 50 containers gone out the gate in one hit - not worrying about trucks, drivers, and the worry of what can those trucks do on the road."

Last year, Ports and Freight Minister Melissa Horne described getting freight off roads, and onto rail, as "a bit of a Holy Grail for government policy.

"Having a mode shift incentive scheme is actually critical to be able to provide that incentive to different service providers or different freight movers to be able to incentivise them to get more and more freight off our roads and onto our rail," she told a parliamentary committee.

She confirmed the rebates, based on the 20-foot equivalent TEU containers transported by rail, had decreased by five per cent each year.

But, at the same time, the company was disappointed the government had not committed to funding the scheme for the next five years.

"That's in line with what the government has been calling for," Mr Eryurek said.

"It's the view of the industry that a five-year timeframe is appropriate to coincide with the Port of Melbourne's highly anticipated Port Rail Transformation Project coming online by 2026 and to also provide certainty to Victorian primary producers and exporters."

That would be backed by the highly anticipated state government Port Rail Shuttle network, with outer metro hubs similar to those at SCT Altona.