The 156-year-old church at the centre of a town struggle has officially been sold. 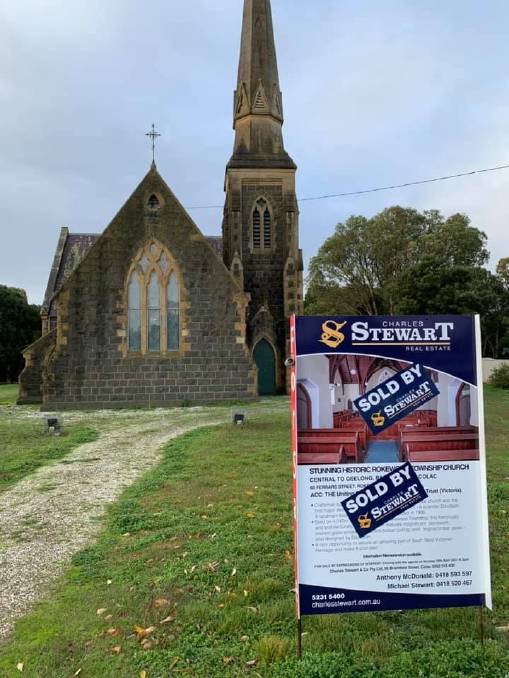 SOLD: The historic Rokewood church has been signed despite a last-ditch effort by members of the community to stop it. Picture: Charles Stewart.

The 156-year-old church at the centre of a town struggle has officially been sold.

The "sold" stickers went up on the Uniting church in Rokewood last week after all the financial hurdles for the sale had been satisfied.

A petition was lodged for the Victorian Parliament to consider intervening only a few weeks ago but it appears the fight is over now the sale has gone through.

The small western Victorian community had mounted a last-ditch effort to save their historic bluestone church from being sold.

It is believed to have been bought by people from outer Melbourne.

The church was listed for sale for about $500,000 and agents Charles Stewart said there had been hundreds of inspections on the grand property "and much interest".

There were abortive efforts through Golden Plains Shire Council, whose mayor Helena Kirby, runs the Rokewood store, to try and convince the Victorian Government to buy the building.

There was even a community hope the Presbyterian Church, which owned the church before the congregation voted in 1974 to move to Uniting ownership, would be interested in moving back in.

There are numerous heritage protection orders over the church.

It is a double whammy for Rokewood after St Patricks, the town's Catholic church, was sold earlier in the year.

Rokewood's organist of 50 years, John Carr, said the congregation had dwindled to less than five.

"You can't pay for the upkeep on a place like this with so few."