Bree Cudmore secured the win with the first dog she's ever owned. 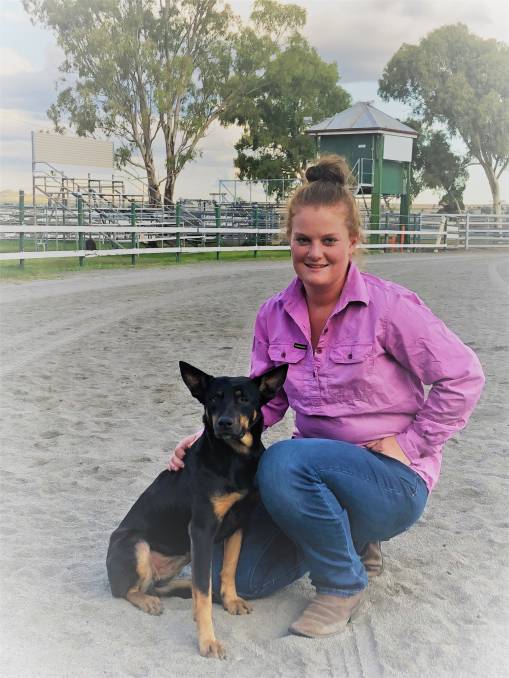 For the first time in more than 50 years of working dog competitions for the kelpie breed, a woman has won the prestigious Working Kelpie Council National Kelpie Field Trial Championship.

At 26-years-old Bree Cudmore is not only the first woman to win the coveted Australian title, she is also one of the youngest competitors to claim the top honour.

What's more she secured the win with the first dog she has ever owned.

The Victorian-based livestock overseer stole the spotlight at the 51st championships hosted in Allora, Queensland, after a standout partnership with her four-year-old kelpie, Marista Zoe.

The duo were clear winners finishing with a total of 166 points, ahead of well-known trialists and multiple national title holders Kevin Howell (162), Gary White (160) and Adam James (159).

Ms Cudmore's feat was impressive given Howell has won the event a record nine times, White has taken home the silverware five times and James has claim the championship title twice.

Initiated by the Working Kelpie Council of Australia in 1970 the national championships are regarded as the competition pinnacle for entrants from across the country.

The event is held in a different state each year.

For Ms Cudmore it was an unexpected but welcome reward for the hours she and Zoe have put into working stock.

"The win was incredibly special because Zoe is the first dog I have ever owned," she said.

"I bought her in 2018 and back then she was my only dog, so she was my best mate at work and at home.

"I take Zoe everywhere with me, and in turn she is a little dog who devotes herself to me.

"We definitely have a connection."

It has been an interesting journey to the top of the working dog sport for this young Victorian handler.

Raised in the Traralgon region of Gippsland she grew up in town, but with a keen love of the bush.

After school she worked as a stable hand, then a rouseabout, before teaming up with experienced stock handler Travis Scott doing contract lamb marking and other sheep work.

"I worked with Travis for three or four years and he really introduced me to working dogs," she said.

"He had a great team of kelpies and he was very generous with his knowledge and keen to support others in developing their skills."

It was Travis who suggested she purchase Marista Zoe as a one-year-old and try her hand competing.

"I had never been a competitive type, but something about gauging your skills and the skills of your dogs against others really appealed to me and I was hooked."

She admits winning the encourage level at her first trial helped clinch the deal.

Today she works as a livestock overseer on a 3000-hectare mixed farming operation at Colac in Victoria.

She is responsible for day-to-day handling of the 13,000 head merino flock and does the job with her faithful dog, Zoe and a team of four other kelpies.

"I work with my dogs every day, whether we are mustering, backlining, drenching sheep, they are my team and I think that has helped build both their skills and mine."

Yet despite her growing experience and her success in the competition stakes - she was the Victorian state representative for the 2020 Australian Yard Championships and has won a swag of other titles - Ms Cudmore remains modest about her achievements.

"I still have so much to learn and really that is why I compete," she said.

"You get to interact, learn from and watch some of the best handlers in the business.

"And I really didn't expect to do so well at the national championships this year and I owe a lot of the win to Zoe.

"She is a very kind, very patient, little dog. If I ask her to sit, she will stay there and hold the sheep while I figure out what to do next."

The young overseer also didn't expect to write her way into the history books as the first woman to win the coveted national title.

"I have been fortunate to compete with a lot of other very talented women and there are more and more women involved in the sport, as well as agriculture in general, which I think is a real positive," Ms Cudmore said.

"As a young woman I do still think we have to 'prove ourselves' a little more in the rural workforce, but that is gradually changing and people are being recognised for the skills and attitude they bring to the job, rather than their gender.

"However, if winning helps encourage more young women to try dog trialling or to follow their dreams to work with stock or do something else in agriculture then that makes it extra worthwhile."

This year's judge Mark Davey said the calibre of competitors had been exceptional, but the connection between the winning partnership had been evident in both the field and yard components of the course.

"Bree and Zoe worked incredibly well together and there was patience, control, discipline and a clear connection between handler and dog that really set them apart," Mr Davey said.

"They finished with the highest score in both the field and yard sections of the course, which reflects both their skill and their ability to work as a team."