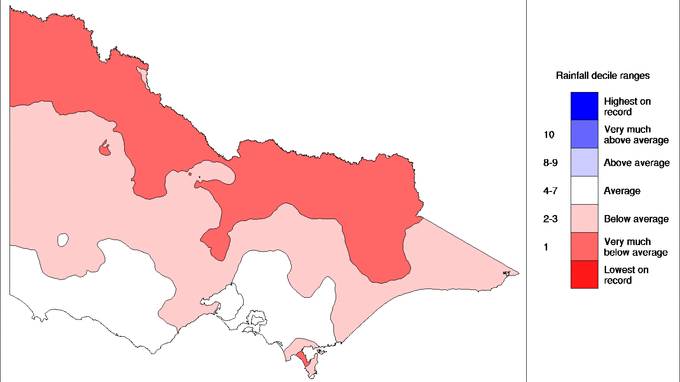 DRY: A Bureau of Meteorology graph shows a dark red section across most of northern Victoria which experienced very much blow average rainfall in April.

A graph shows how much rain fell across Victoria in April.

Northern Victoria has experienced one of its driest autumn months on record, as parts of the far north-west of the state received no rainfall in April.

The BoM's climate analysis reveals most of the state's north had less than 20 per cent of the normal monthly average rainfall in April, while the state's average long-term mean of 51 millimetres was 64pc below average.

However, a series of cold fronts which crossed the state in the middle weeks of the month brought some decent falls, with Ferny Creek receiving the highest daily rainfall total of 59mm on April 11.

Ferny Creek was the state's wettest place in April receiving a total of 140.

The analysis showed Victoria's rainfall for the first four months of 2021 was slightly above average due to a wetter than average January and an average March for most of the state.

Victoria also experienced its coolest minimum temperature on average (0.65 degrees) in April, the lowest for the start of autumn since 2008.

"Daytime temperatures were close to average across Victoria away from the north-west, due to the multiple bursts of cold southerly air and increased cloud cover, which followed the passage of cold fronts," the BoM said.

The Mallee town of Walpeup, in the state's north-west, was the hottest place to be last month recording a top temperature of 35.9 degrees on April 4. 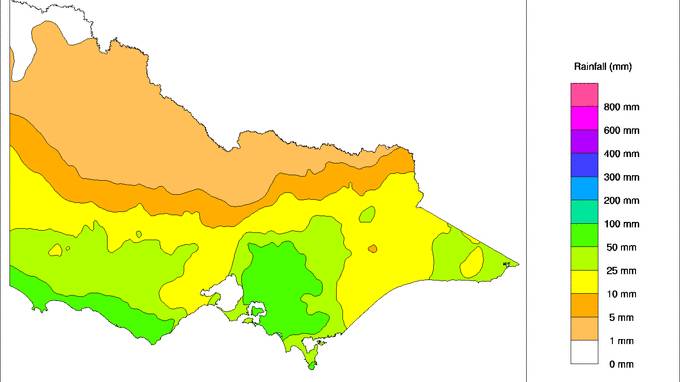 NO RAIN: Another Bureau of Meteorology graph shows far north-west Victoria received no rain in April.

"A polar air mass followed in a wake of a strong cold front that crossed Victoria on the 10th, bringing damaging winds, powerful surf along the coast, and daytime temperatures more than 8 degrees below the April average at many sites," the BoM said.

Snow on the Alps

A cold front which crossed the state on April 10 also contributed to snow flurries at lower elevations including Marysville and the Dandenong Ranges.

"More snow fell on the Victorian Alps in the wake of a vigorous cold front that crossed Victoria on the 20th bringing low temperatures, rain and snow," the BoM said.

Wilsons Promontory recorded the strongest winds in April with 124 kilometres an hour gusts felt at the Prom's lighthouse on April 10 and 11.

Long-term outlooks for the next six months show parts of the state, particularly north and eastern Victoria, are likely to experience above average rainfall, but not for some time.

The two three-month outlooks between May-July and June-August show extra rain will likely fall across the state in the coming months, however, the outlook for May is still dry.

"The one-month outlooks for most of the state show there is not a strong signal for rain in May," BoM senior climatologist Jonathan Pollock said.

"While the three-month outlooks are wet, it's unlikely we will see much of that rain until June onwards."