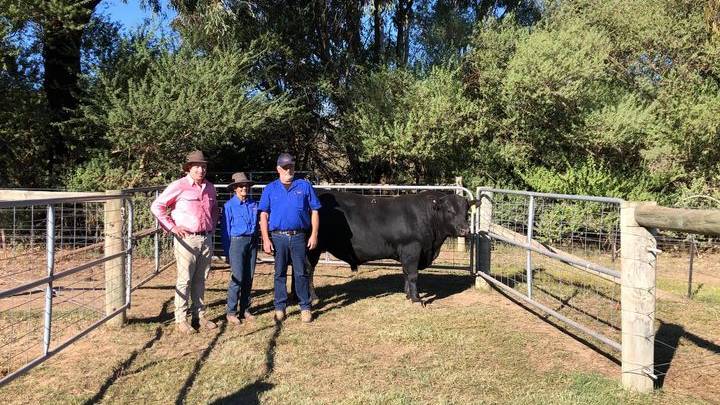 The top-priced bull at the Jarobee sale was close to being retained at the Beechworth stud, before principal Jan Robinson relented and decided to offer him for auction.

Stud principal Jan Robinson said he was "the type of bull we all look for.

"We nearly hung onto him but, at the finish,we were pretty busy, and everyone said 'let him go," she said.

"He was a stand-out, all the way through.

"I see them from when they are babies and he was always the heavier one.

"I liked how he looked - he was a lovely quiet fellow, and everything about him was good."

Mrs Robinson said she was very pleased he had gone to Jodie and Shane Foster at Boonaroo.

He had a carcase weight of 70kg.

Momentous' eye muscle area was 11.7 square centimetres and his rib fat was 0.4 millimetres.

He had an intramuscular fat of 3.4pc.

Mr Foster said the bull had a solid data set, with a good spread from birthweight to growth.

"On inspecting the bull, his structure was excellent and his phenotype was as good as any you would see in a young bull," Mr Foster said.

"His type and disposition were excellent."

The bull would be used over younger heifers and cows.

"He's just going to be the sort of bull that's going to put back softness and muscling into our herd, as well as helping us improve that marbling.."

Momentous would be used in the stud operation.

"He has a really strong pedigree that backs him up as well and will also improve the strength of our cow herd, as well," he said.

"Jarobee were over the moon to sell a bull for that price," Mr Shea said.

"He had a very balanced set of numbers."

Many repeat buyers came to the autumn sale, with bulls going to Yarram, Kyneton and the north-east.

"We work hard to produce a line of bulls that will go out and join cows and produce runs of steers and heifers that have high performance," she said.

Some examples at this year's weaner sales were impressive.

Both the steers and the heifers returned more than 500c/kg.