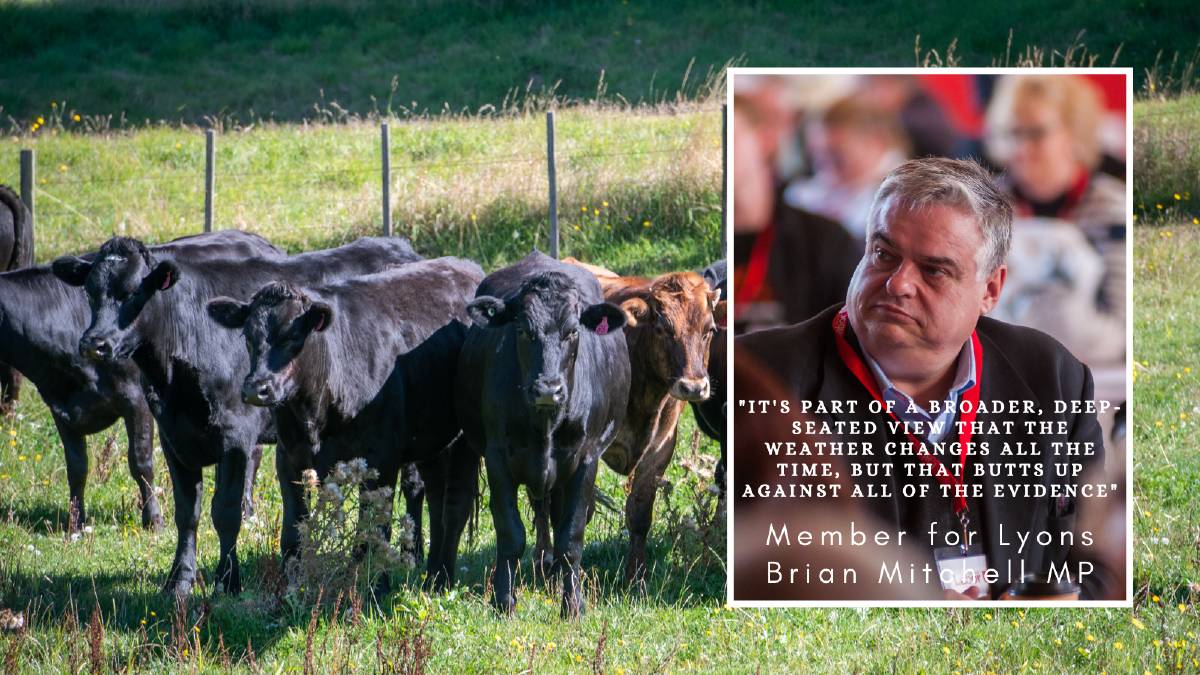 'Farmers are at the coal-face of climate change'

Tasmanian federal MP Brian Mitchell says the government's approach to climate change and agriculture is part of a broader problem.

Last month, Nationals MP and Deputy Prime Minister Michael McCormack made a statement that agriculture "could be excluded" from Australia's climate talks.

The comments were described as disappointing by Tasmanian farmers Sam and Stephanie Tretheway, who have started a regenerative agriculture beef farm.

The Tretheweys, of Dunlorlan, were the first farm in Tasmania to register a soil carbon project under the Australian Government's Emissions Reduction Fund.

"It's part of a broader, deep-seated view that the weather changes all the time, but that butts up against all of the scientific evidence we've ever received," he said.

Mr Mitchell, a Labor MP, said climate change presented a problem and opportunities for Tasmania, but that didn't mean that the issue shouldn't be talked about more broadly.

He said he believed the Liberal Government feared being seen as too closely aligned to the Greens, if they admitted the significance of climate change.

However, the issue was becoming bigger than just politics.

"In a Tasmanian context, the warming of our oceans means more diseases and pests will be introduced to our aquaculture industries, but it also means that more fish species can thrive in our waters," he said.

While climate change was a double-edged sword for Tasmania, he said the state's agriculture industry was at the coal-face and from what he'd heard from farmers was that they wanted to be involved.

"We need to do the research, and the government needs to provide incentives to make sure that research happens.

"There are farmers out there who want to be involved, but it can be a costly exercise, things like transitioning to regenerative agriculture practices can cost."

However he said the government could do more to help assist farmers to develop and find alternative solutions.

The comments were backed by federal Agriculture Minister David Littleproud, who said Australian farmers "had already done much of the heavy lifting on limiting carbon pollution and should not be hit in any future climate target process."

Mr Mitchell said while he understood the sentiment of the comments, they could be damaging to a sector that was at the front line.

"Farmers are leading the push for change, and there's good work being done, but we want to see faster action."

The story Tasmanian MP calls for farmers to be included in climate discussion first appeared on The Examiner.