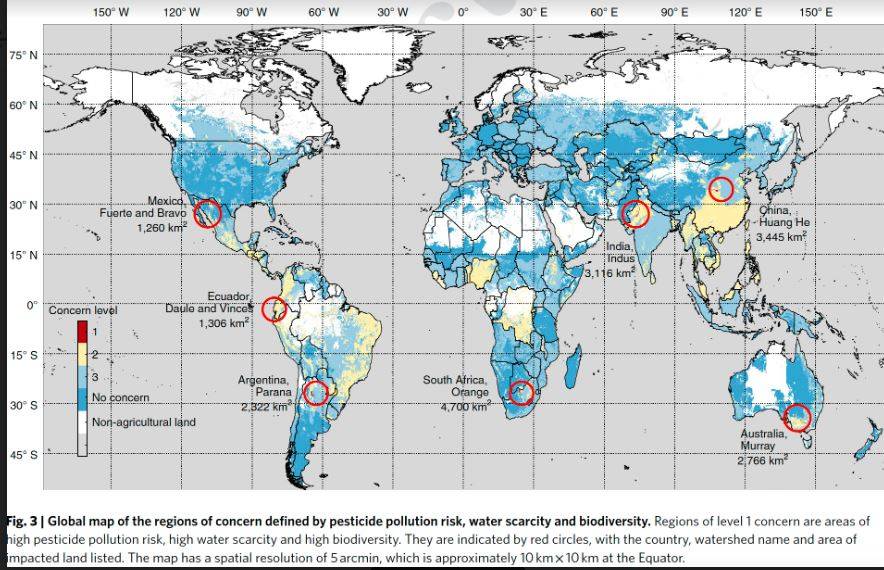 A Sydney Uni study has found the Murray Darling Basin is an area of concern in terms of pesticide pollution due to water scarcity and its high level of biodiversity.

A Sydney Uni study found while Australia is doing well on pesticide pollution overall, the MDB is of concern, but CropLife disputes that.

AN INTERNATIONAL study that looked at the risk of pesticide pollution has found that while overall contamination levels in Oceania are the lowest in the world there is cause for concern in the Murray-Darling Basin.

Authors of the study, published in Nature Geoscience, said the MDB was considered a high-concern region due to both its water scarcity issues and its high levels of biodiversity.

Together with key catchments in major agricultural regions in South Africa, Ecuador, China, India and Argentina the MDB has been nominated as a particular concern.

Researchers from the University of Sydney, who put together the paper, said 168 countries were surveyed based on the usage of 92 common agricultural chemicals.

It was found that 64 per cent of agricultural land was at risk of pesticide pollution, with almost a third of these areas are considered to be at high-risk.

However, the crop protection sector took exception to the claims regarding pesticide pollution.

"It is unfortunate that the University of Sydney's press department chose to publicise the release of an otherwise interesting paper with unscientific, emotional, inflammatory and most of all misleading language surrounding the risks of the use and fate of pesticides in modern agricultural production," said CropLife Australia chief executive Matthew Cossey.

"Global regulators and environmental protection authorities are on the ground, with substantial data and rigorous methodologies ensuring that risks posed to both agricultural land and the environment as well as food, native animals and vegetation, and human health are well managed, monitored and evaluated and pose no threat to their continued wellbeing," Mr Cossey said.

The study examined risk to soil, the atmosphere, and surface and ground water.

Asia was found to be the region with the most land at risk of contamination, with China, Japan, Malaysia and the Philippines the highest risk nations.

University of Sydney research associate and the study's lead author, Fiona Tang, said farmers needed to consider the negative implications of excessive pesticide use as well as the boost to productivity they can bring.

"Wider scientific literature has found that pesticide pollution can have adverse impacts on human health and the environment," said Dr Tang.

Pesticides can be transported to surface waters and groundwater through runoff and infiltration, polluting water bodies, thereby reducing the usability of water resources.

Co-author associate professor Federico Maggi from the School of Civil Engineering and the Sydney Institute of Agriculture said pesticide use was only going to rise as the agriculture sector looked to feed more people with less land and manage a likely increase of crop pests due to climate change.

"In a warmer climate the use of pesticides is expected to increase to combat the possible rise in pest invasions and to feed more people," said Ass Prof Maggi.

However, Mr Cossey disputed this.

"Despite the assertions to the contrary, pesticide use globally per hectare is declining, as the safety and ecological footprint of their use - and the resultant effect on global food production - is steadily increasing," he said.

Dr Tang said while food security was of paramount importance it could not come at the expense of the environment.

"Although protecting food production is essential for human development, reducing pesticide pollution is equivalently crucial to protect the biodiversity that maintains soil health and functions, contributing towards food security," she said.

"The goals of the Plant Science Industry and farmers both here in Australia and worldwide align with those of the researchers," he said.

"That is improving the safety of the food supply, while steadfastly increasing the abundance of said food supply, and reducing the impact of human activities - land use and pesticides both - on the resilience and sustainability of the environment and agricultural production systems."

To ensure the risk of pesticide pollution is kept in check, co-author Professor Alex McBratney, director of the Sydney Institute of Agriculture at the University of Sydney, said a global residue monitoring system was required.

"This study shows it will be important to carefully monitor residues on an annual basis to detect trends in order to manage and mitigate risks from pesticide use," Prof McBratney said.

"We recommend a global strategy to transition towards a sustainable, global agricultural model that reduces food wastage while reducing the use of pesticides," said the authors of the paper.

The story Australia doing well on pesticides, but MDB a concern first appeared on Farm Online.