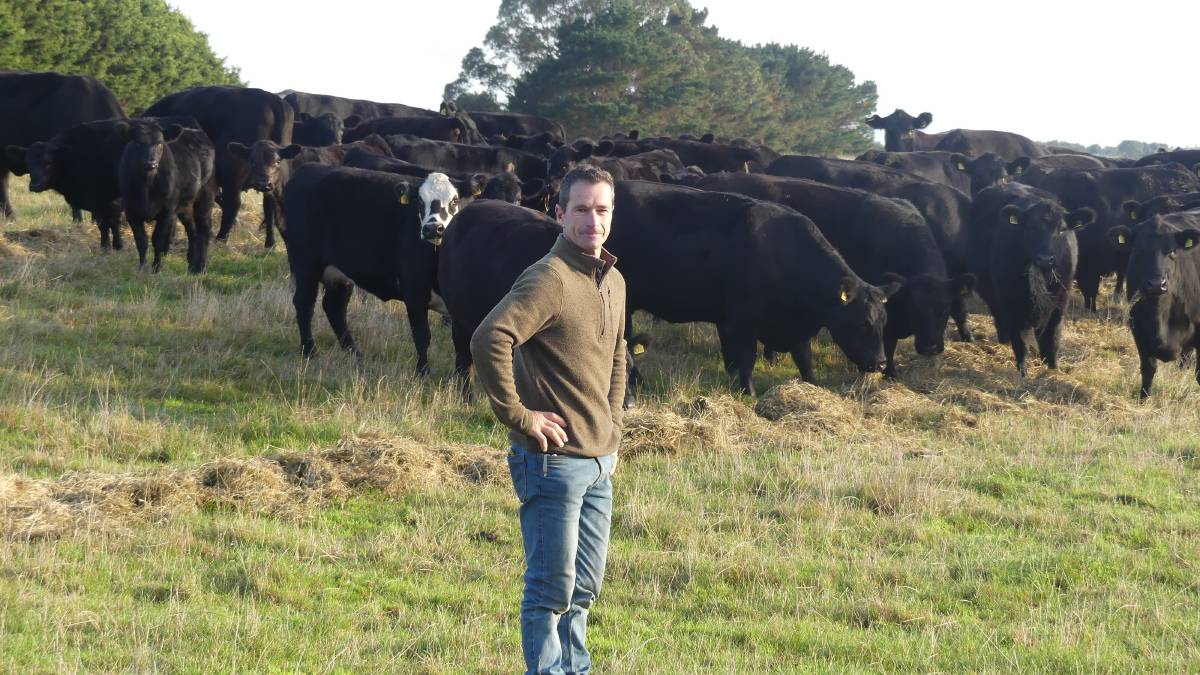 BEEF SWITCH: Fish Creek beef producer Mark Standfield says he moved away from dairy, after realising he was missing out on seeing his children grow up. Photo by Bec Nadge.

Dairy switch driven by favorable prices in other sectors.

Lifestyle was a key reason for south Gippsland dairy farmer Mark Standfield to leave the industry and convert to beef production.

Mark Standfield, Fish Creek, has been out of the dairy sector for two years, gradually transitioning to beef cattle.

"I'd done 30 years in dairy, the kids were growing up in front of my eyes,I was seeing them for about 10 minutes a day, so something had to give," Mr Standfield said.

He said the family went around Australia for three-and-a-half months, a week after finishing running the dairy.

"That was a pretty big incentive."

He runs a herd of Angus cows and calves.

'As I was reducing dairy numbers, I was increasing beef numbers."

He said he was running Dunoon bulls in the herd, turning off some weaner steers and growing others out to 650 kilograms.

Heifers were retained to build up the herd.

He said that was the difference in lifestyle.

"The way beef is, at the moment, I am doing just as well, if not better, than dairying for a fraction of the hours and the headaches," he said.

The main difference was improving fencing, as it needed to be more substantial than for dairy cattle.

With a 400-cow dairy farm, there was always high staff turnover.

"That was what was doing my head in," he said.

Mr Standfield said the beef cattle were being run on the same pastures he had used for the dairy herd.

"There are a fraction of the inputs required for dairy, we have had two really good seasons and beef prices are good," he said.

"There were probably multiple reasons - the direction of the dairy industry, uncertainty as to where it's heading and some of our plant needed upgrading," Mr Dettling said.

But he says his production methods are still run along dairy lines, with stock run on pastures.

"It's now all beef, we do have some Friesian steers, but it's whatever we can make a margin on."

"We had been rearing up some Friesian steers, so we already had some stock there.

"This year we have been getting some straight beef weaner steers, through the saleyards at Mount Gambier and Warrnambool."

Mr Dettling said, "knowing your numbers" was important when switching to beef.

"There is more budgeting to do because you don't have that monthly milk cheque.

"That's the biggest challenge, along with the cost of stock, but the expenses are a lot lower.

"As long as we see there are margins to be made, we'll stick to our price and know what we want to spend."

The Dettlings are running 450 head of cattle at the moment and intend to remain flexible with a half-dairy steer and half-beef herd.

"Some we'll take through and turn off at feedlot weights, we'll background them for the feedlots, but it depends on the time and season.

"We have options, so we don't get locked in."

Mr Dettling said he was growing summer crops, millet, rape, and green cover on the property's swamp area, as the grass had started to dry off on the higher ground.

Strawberry clover was being grown on the flat areas of the property.