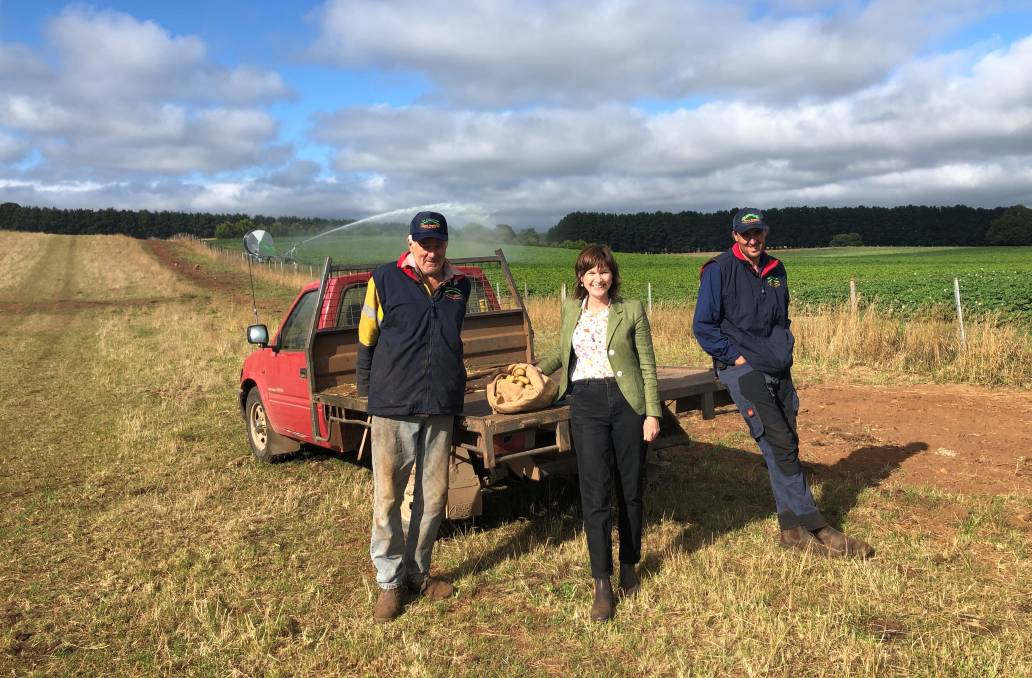 More Victorian farmers will be able to gain greater energy efficiency after an extension of the government's Agricultural Energy Investment Plan.

The AEIP helps businesses to reduce costs, by offering grants for all forms of energy efficiency, including diesel, gas and electricity.

Agriculture Minister Mary-Anne Thomas said farmers could apply for grants of up to $250,000 to install infrastructure and technology that would make their farms more competitive and sustainable.

"We know key initiatives like the Agriculture Energy Investment Plan help address one of the most significant costs for farmers and producers - putting more money back in their pocket to use elsewhere in the business."

John and Millicent Dunn have a mixed crop and livestock property at North Blackwood.

Mr Dunn said he would use the money to upgrade, and double, the area he has under irrigation, by improving his diesel generation system.

"We will get a more efficient motor, we were using a tractor before - it will save a heck of a lot of labor," he said.

"I have been going to put in underground pipes for a long time, we heard about the grants so we get the pipes, the travelling irrigator and the motor."

Irrigation was mainly used on the potato crop.

Ms Thomas said the improvements were expected to deliver annual energy savings of approximately 20 per cent to their business.

Farmers can apply for up to $20,000 through the Fast Track Rebate to purchase items that have been recommended through an on-farm energy assessmen

To date, almost 800 on-farm energy assessments have been completed under the AEIP, valued at almost $7 million.

More than 450 grants totalling $22 million have been awarded.

South-west Victoria missing out on millions in investment, due to poor power supply

But Tyrendarra dairy farmer Bruce Knowles said when it came to funding improvements to electricity use efficiency, in particular, more needed to be done.

"We have nothing against a lot of these programs and some of the technology being put forward, but what governments have failed to sort out is that these upgrades rely on efficient transmission," Mr Knowles said.

"These programs should also include upgrading and improving transmission infrastructure."

That would maximise the efficiency of the upgrades, carried out as a result of the small grants.

A Powercor proposal, to upgrade the transmission system, had been knocked back by the energy regulator.

A spokesman for Powercor said its proposal would have provided broad social and economic benefits to the region.

"While we are disappointed with this decision, the AER's draft determination is clear that our proposal will not receive support in the final decision," the spokesman said.

"Therefore, we have not proceeded with this plan in our revised proposal but we have offered to the community that we will support their objectives, if they seek other avenues to progress these upgrades."

The upgrade would have improved supply to 1130 customers in the region.

The Energy Marketing Consultancy Agency (EMCa) said it did not consider it was valid to treat gross regional output as an economic benefit, for the purpose of cost-benefit analysis.

It found Powercor's proposed regional supply upgrades were not justified, as the company had overvalued their benefits.

"On balance, while we acknowledge the concerns of stakeholders in support of this program, we agree with the majority of stakeholder submissions and EMCa and do not think that all Powercor customers should pay for this project.

"[Therefore] Powercor has overvalued the benefits to Powercor customers and the project is not prudent and efficient."

Mr Knowles said residents were very disappointed with the decision to knock back the upgrade.

"The most disappointing thing is EMCa only took into consideration four dairy farms, in the south-west, and they used that as the basis for their cost benefit analysis," he said.

More than 100 submissions had now been sent to the regulator, questioning EMCa's position.

"We are hoping like hell, they will reconsider it," Mr Knowles said.

United Dairyfarmers of Victoria president Paul Mumford said the case in the south-west was "unique."

"They really rely on that infrastructure to get great investment in the region," Mr Mumford said.

"The UDV constantly advocates to improve those poles and wires, across the state."

But upgrades like battery technology still had some way to go.

"That's why we are having discussions about poles and wires, because we can't store energy on our farms," he said.

Mr Mumford said the grants were welcomed, and the government should be congratulated for identifying energy as a key cost to agriculture.

"One of our top three costs in our budget is energy," he said.

'That's why we saw a very positive uptake in grants in the first phase, particularly among dairy farmers, because they are looking at ways of becoming more efficient on-farm."

Farmers wanted to be clean, green and energy efficient, but cost was a big hurdle.

"For the government to provide a grant is a great outcome for energy, the environment and farmers."