The Invasive Species Council is urging the Victorian government to re-classify deer as a pest animal, rather than a protected game species. 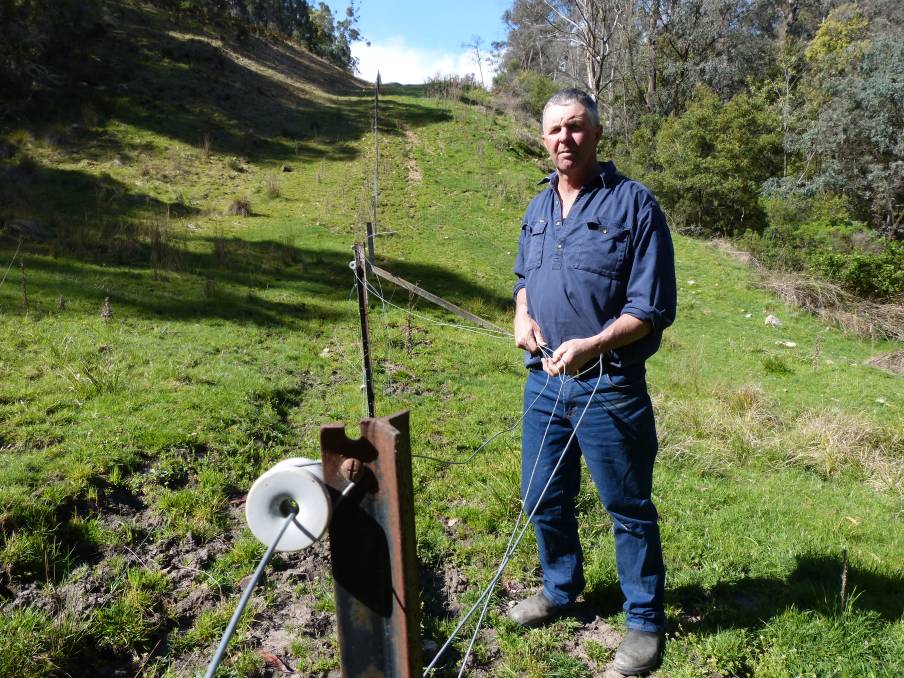 WORK TO BE DONE: Simon Lawlor, Omeo, says he is repairing fences "smashed" by wild deer on a weekly basis.

The council's chief executive Andrew Cox said deer should be regarded in the same way as feral pigs, foxes, cats and rabbits.

"The Game Management Authority has seemed to have had an overly dominant role in deer policy in Victoria and I think that's stymied pest control attitudes, to this problem," Mr Cox said.

"Where you seem to have routine problems around fox and dog control - why not deer?

"It's a feral animal, it should be managed as such."

Mr Cox said there was a legal impediment, in regarding deer as wildlife under the Wildlife Act, which needed to be removed.

"But once enough people tell the government how they are suffering under deer impacts, or they don't want deer to come to their neighbourhood, I think they will have to come on board with a pest control style program."

The council also urged the Victorian government to expand its aerial and ground shooting program, across all land tenures, to control deer and other feral animal numbers.

Mr Cox said the council had written to the Victorian Agriculture and Environment Ministers, congratulating them on Parks Victoria's plans to begin removing deer and other feral animals from fire-affected areas.

Parks Victoria is carrying out ground and aerial shooting across a range of parks including Mt Buffalo, Croajingolong and the Alpine National Park.

"While the bushfires were a tragedy for our native plants and animals they were a boon for many feral animals, providing easy hunting grounds for feral cats and foxes, and opening up new areas for big browsing animals like feral deer," Mr Cox said.

"The time is ticking by and we need action, on the ground - Parks Victoria action is good, especially when they spent many years developing a strategy and when they have got $18 million in funding," he said.

"We want to get that money rolling right now, and fast track the three regional strategies they have proposed.

"They are talking about doing the metropolitan one first and the eastern and western ones later.

"But deer are causing lots of damage now, and they need to get going with a proper strategy, not just a laissez faire approach, which is largely the recreational hunting deer control we have in the state, at the moment."

The regional plan was simply a framework to do the work on the ground.

"We would like to see targeted, ground and aerial shooting, we'd like to see some locations that are deer free zones, or deer containment zones.

"It's not just about government effort either, it's on public and private land, so it's programs that coordinate effort amongst landowners, so that everyone is doing their bit."

He called for an all-in coordinated approach to deer control, throughout Victoria.

"It just takes one or two reluctant land owners, they harbour the deer, and it undermines the efforts of landowners who really do want to control deer in their area."

"Often it's said there are a million or more deer in Victoria - that's just guesswork, based on the amount of hunting effort, that's going into deer," he said.

"It doesn't show how many deer out there but we know they are causing major damage.

"I think until now the government has prioritised the provision of hunting opportunities ahead of conservation, but you can actually have both."

Simon Lawlor has a property near Omeo, in the Upper Livingstone Valley.

He runs Herefords, first-cross ewes and prime lambs on the 1700-hectare property.

"It's quite popular for deer to be considered a game species, rather than a pest," Mr Lawlor said.

'When they are a pest, they largely only affect land holders, but when they are game species, hunting is seen as quite an attractive sport.

A controlled shooting program, which cut deer numbers, would reduce the pressure placed on farmers.

He also agreed that there needed to be a regional approach to deer control.

"You can't have blanket approach, having a state based approach won't work on places where there are no deer."

He urged the government to take the council's suggestions on board.

"Over the last few years, stock in the far reaches of the property are starting to become unmanageable, because they are getting so stirred up by poachers."

Peter Star, near Wodonga, runs sheep and beef cattle on the fringe of the Upper Murray forest complex.

"We have had a mild summer, with rain, so they haven't come out as much, looking for feed, but they are still there, they are still about, still coming onto farms," Mr Star said.

"They are not a native animal, they are an introduced species, therefore they should wear the tag of being a pest animal."

Deer in the area had been wrecking fences, chasing livestock and overgrazing pastures.

He agreed a more extensive shooting program should be carried out.

"I know, after the bushfires, they were attempting to do a bit of a clean out of those feral animals, on public land, but it all comes back down to the budgetary restraints," he said.

The Victorian government and Game Management Authority have been contacted for comment.