There was a strong result at this year's Wilkah Herefords bull sale at Vasey on Monday. THRILLED: Angela, Andrew, Will and Kaylah Lyons, Wilkah, together with major buyer at the sale Jason Koch, Dergholm, and Sam Broomby, Elders Casterton.

The sale, conducted via the helmsman system, saw strong local demand in particular push prices to a top of $11,500 with an average of $7090.

The top price bull was by Kirraweena Australia out of the cow Wilkah Marshall and featured a number of traits to indicate it would make a top-class bull including good gestational length, birth weight and 200, 400 and 600-day growth ratings.

Mr Koch was the major buyer at the sale with his three purchases.

Mr Lyons said a highlight of the sale was the number of new buyers at the sale.

"We had five new ones this year which is great recognition of the bulls we are putting together," he said.

"They have all come from more or less the local area, across into south-eastern South Australia."

There were 11 of 18 bulls sold during the sale. 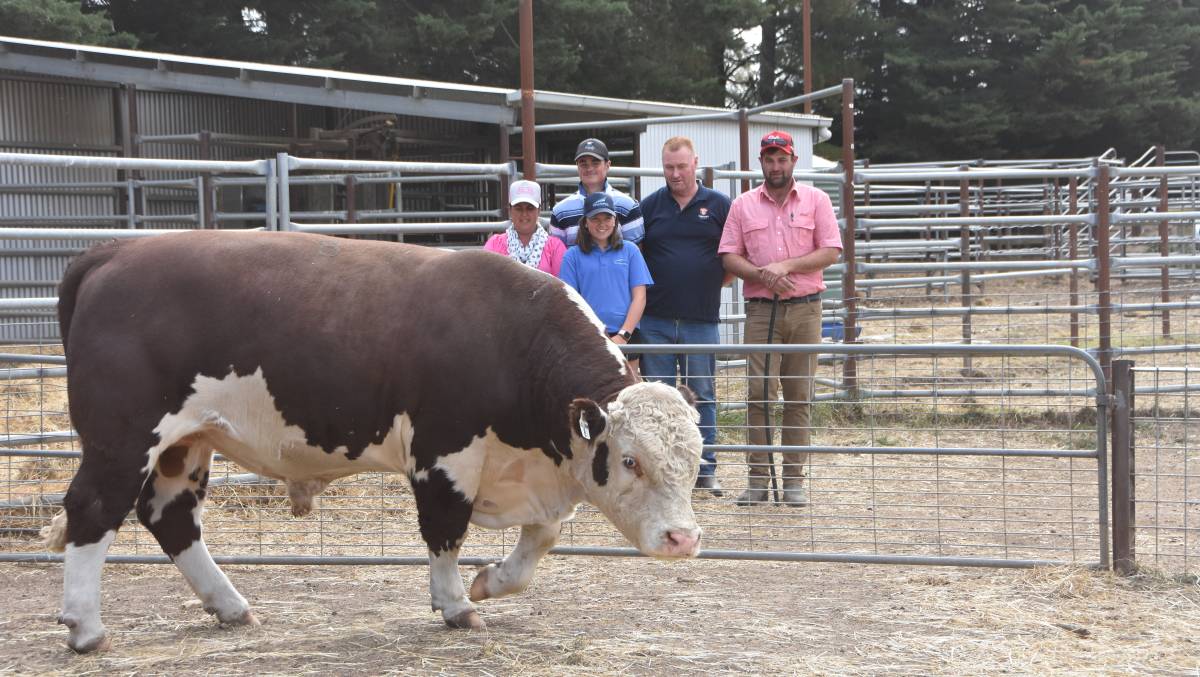 POTENTIAL: The top-priced bull with the Lyons family and buyers Jason Koch and Sam Broomby, Elders, in the background.

Strong seasonal conditions, which saw a near perfect season in the south-west for cattle, with a relatively dry winter meaning not too much waterlogging and a solid spring and early summer have inspired confidence among beef producers.

They have also been inspired by this year's sales results, which have seen weaners making record money in centres all the way from Roma in Queensland right down to Ballarat during the first couple of months of 2021.

Mr Lyons said he was thrilled with the way the line-up of bulls had come together.

"We've put in a lot of work and I think the way they presented today was a credit to us," he said.

"It's great to see a few new buyers turning up this year as we look to continue to build momentum at the sale."

Mr Lyons said he was pleased with how the helmsman system worked, saying it had worked well over the past two sales.