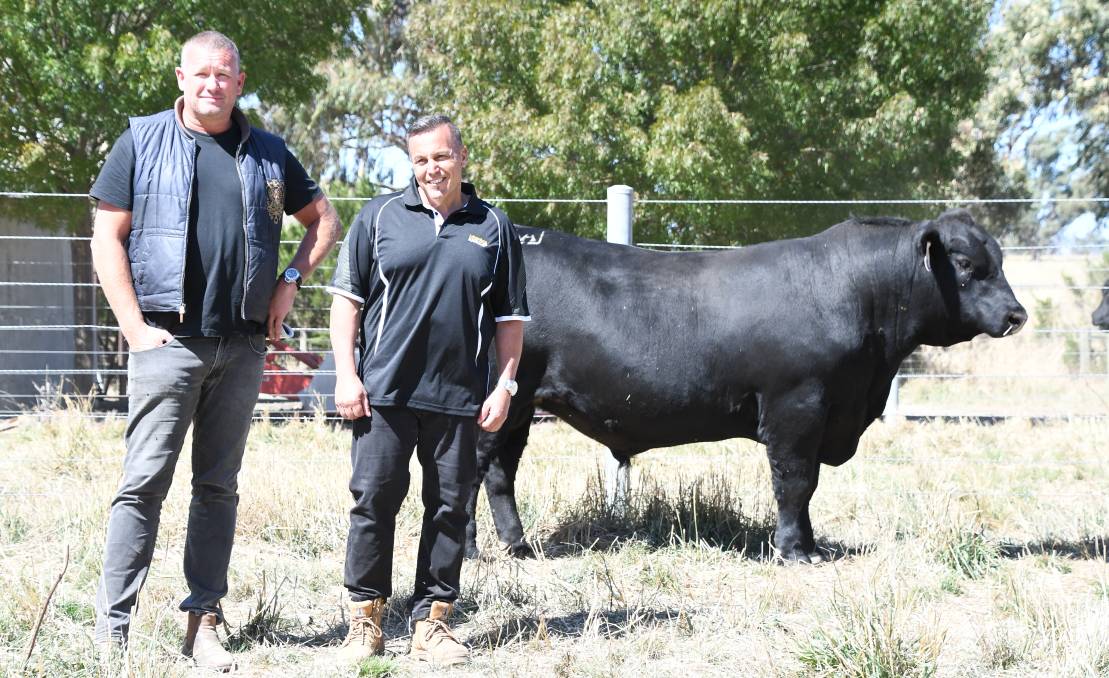 The stud recorded a $5000 increase on its average compared to 2020, with bulls selling to commercial and stud breeders in Victoria, NSW and Queensland.

The top-priced bull - Lot 18 - was an 18-month-old son of GAR Drive, weighing 838 kilograms on sale day and being in the top 1 per cent of the breed for rump fat.

"It was our first time purchasing bulls from the stud, after buying females in the past," Mr Kay said.

"We're running about 300 cows, and increasing our numbers slowly through keeping our heifers which we are going to join to the bull purchased today."

Adameluca Quadrant Q76 was an 18-month-old Stoney Point Identity N826 son, in the top 10pc of the breed for rib fat and top 10pc for mature cow weight (MCW).

"We're growing our cattle numbers and stock quality, which was the reason we secured Lot 21 and Lot 8 at Adameluca," Mr Thomas said.

"Our cattle are mainly going through local markets and having good quality, well-known, local bloodlines is advantageous as we grow our herd.

"The structure of Lot 21 was terrific, and the estimated breeding values work out well, with growth being a large factor for us turning off our calves.

Adameluca Quigley Q10 was a 21-month-old Clunie Range Landmark son, in the top 5pc of the breed for rib fat and top 10pc for carcase weight and rump fat.

Adameluca Quantico Q8 was another 21-month-old Clunie Range Landmark son, recording figures in the top 10pc of the breed for MCW and top 15pc for rib fat.

Volume buyers for the sale included David McClure, Moree Partnership, Harrow, who secured four bulls to a top price of $12,000 (twice) and average $9500.

"They're good bulls and have been good people to deal with as well.

"We're using the Angus bulls to join to our Hereford heifers and second-calvers, to produce weaners for grass finishers.

"We selected the bulls we bought based on phenotype and weight for age, and the carcase attributes, in particular intramuscular fat and large eye muscle area."

Adameluca stud principal Sam Trovatello was extremely pleased with the results of the sale.

"With two bulls going to studs in Queensland and NSW, and to get a total clearance with the average that we did was really good for us," he said.

"It's good to see the local guys take notice and support the stud, particularly after one of our clients won best presented pen of steers at the Kyneton weaner sales.

"The sale really reflects the industry as a whole at the moment, especially looking at previous sales this week."