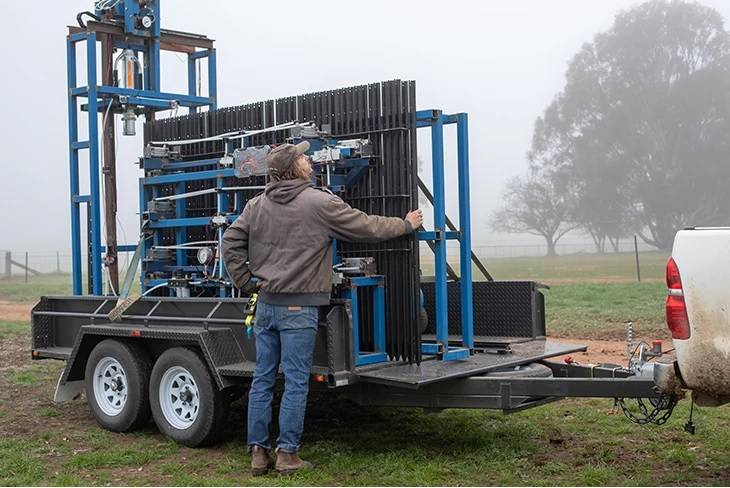 A young Henty farmer has invented a prototype of an automated trailer system for building farm fences.

The design was originally part of a final year Swinburne University project.

The trailer system is aimed at removing the physical labour and vastly decreasing the time normally required for installation.

His idea won the support of Australian Wool Innovation through ABARES innovation award for Young People in Agriculture.

Hugh McKay, 26, shared a dislike for fencing on his family's sheep and cattle property at Henty in NSW and set about doing something about it.

"I've always thought fencing was a very slow and tedious process, moving back and forth up the fence a number of times," Mr McKay said.

"So I decided to apply my product design engineering background and develop a fully automated fencing trailer, the Smart Fencer, which can be towed by any standard ute," he said.

"While there are some products on the market that help speed up some components of the fence (post drivers or wire spinners) there is yet to be a completely automated solution that will complete a fence in one run."

He is designing the trailer to use GPS technology so the operator to plot out the precise position of the fence.

Using this technology, the operator should be able to quickly and easily see the distance that the fence will cover, the number of posts that will be needed, the amount of wire and netting that will be required, as well as an accurate estimated time of installation with the Smart Fencer.

Inside the trailer is a large feeder system capable of holding 50 posts.

Several wire spools can be loaded with either plain, barbed or prefabricated wires to be spun out for the fence.

Once the trailer is loaded, the user drives to the start of the fence where a localised screen in the cabin directs the driver to the first post position.

When the trailer is within a designated range of the post position, the post is grabbed mechanically and moved to exact position and pounded into the ground to the desired height.

Once completed, the driven post is released, the driver is directed forward to the next post position and the cycle is repeated.

The "post donger" is mounted on a set of rails and can move side to side and forward and backwards, allowing the vehicle driver to only need to drive within the desired one metre range of the post.

Wires and netting are tied to the first strainer post and spun out as the post are rammed into the ground.

Mr McKay has done all the design, coding, engineering and manufacture of the prototype himself, in a relatively small timeframe and with a limited budget.

"While I am extremely proud of the progress and accomplishments so far, there is still a long way to go to turn this prototype into a commercial product. The GPS component of the machine has been a big hurdle to overcome, but with a few recent advancements and some new assisting technology, I'm excited that the machine is entering the final stages of development," he said.

"Once the software development and timing of the machine is finalised, there will be a large amount of time testing, trialing, and optimising of the machine over the coming months. The machine will need to be tested in a variety of terrain, soil and weather conditions, with different posts and wires, to make the process as quick and efficient as possible."

The annual Science and Innovation Awards for Young People in Agriculture are coordinated by ABARES and are open to young people aged 18-35 years working or studying in rural industries.

The story Young farmer takes the strain out of farm fencing first appeared on Farm Online.