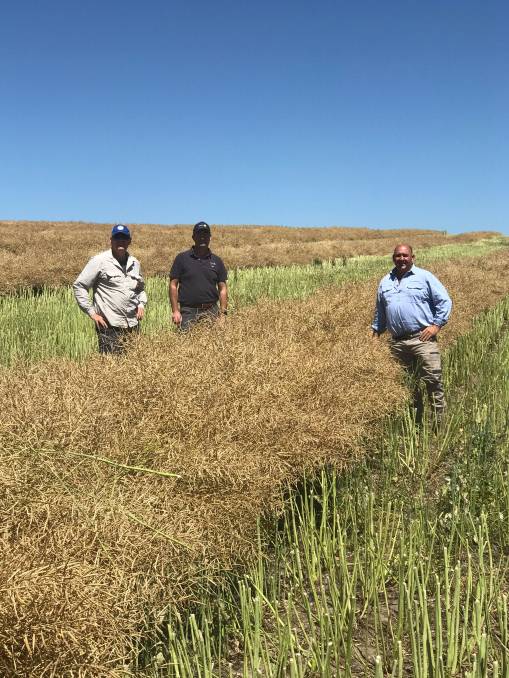 ANY FARMER, no matter where in Australia, would be grinning ear to ear with a 7.16 tonne a hectare cereal crop.

But when that yield is actually in canola, which traditionally yields around half a barley or wheat crop, that figure is off the chart.

A NSW mixed farming business has done exactly that, ripping off the seven-tonner at Oberon, an Australian record, in the NSW Central Tablelands.

Agonisingly, the crop fell a miniscule three kilograms a hectare off the official world record, grown in England last year in much kinder conditions without the temperature variability found in Australia.

Peter Brooks manages the 'Mayfield' farm for the Hawkins family and said the incredible achievement had been made possible due to varietal advances made by CSIRO and the GRDC, together with solid agronomic advice from the two bodies.

"We've had great conditions in 2020, but achieving this yield didn't happen overnight - it was a culmination of 15 years of working with CSIRO to improve our systems," Mr Brooks said.

The record was made even sweeter as the variety was a dual purpose winter canola, Hyola970CL winter canola and it was grazed first, with 20 lambs a hectare feeding off the crop for eight weeks, adding a further margin to already healthy income.

Based on a conservative canola price of $550 a tonne, net income for the grain alone, not factoring the feed value, would be $3938/ha.

Mr Brooks said it was a fantastic recovery.

"In 2019 the farm was heavily in drought and practically a dustbowl, so this is beyond our wildest expectations," Mr Brooks said.

"An event like this is a mixture of bold science meeting excellent agronomy, and brave farming to push the envelope," Dr Kirkegaard said.

He said farmers were having their cake and eating it too with the grain and graze system.

"Grazing the crop in winter provides income early in the season and when managed carefully comes at no cost to grain yield," he said.

"To achieve significant grazing and a record-breaking yield is remarkable and a credit to Peter, his on-site manager Troy Fitzpatrick and the rest of their team."

Agronomist James Cheetham from Delta Agribusiness consulted with Peter Brooks and the team at Mayfield and said the crop was sown early into a paddock with a strong fertility history.

It had a very good recovery from grazing with ideal growing conditions.

"Dual-purpose crops also help farms to manage their operations during times of drought, due to the extra winter feed which forms a significant part of farm revenue," Mr Cheetham said.

"What we've found exciting from an agronomic perspective is that this occurred in a region where canola isn't very common, and it could provide inspiration for a lot more farmers to grow dual-purpose canola."

Dual-purpose crop research is currently part of the GRDC Farming Systems project in southern NSW, and Dr Kirkegaard also contributes to the GRDC-funded Hyper Yielding Crops project managed by FAR Australia on behalf of GRDC which has a focus on the agronomy of high-yielding crops.

CSIRO is working to develop a mission to improve Australia's drought resilience and improve outcomes for regional communities, industries and the environment during droughts.