Weeran Angus saw a big crowd and even bigger average. 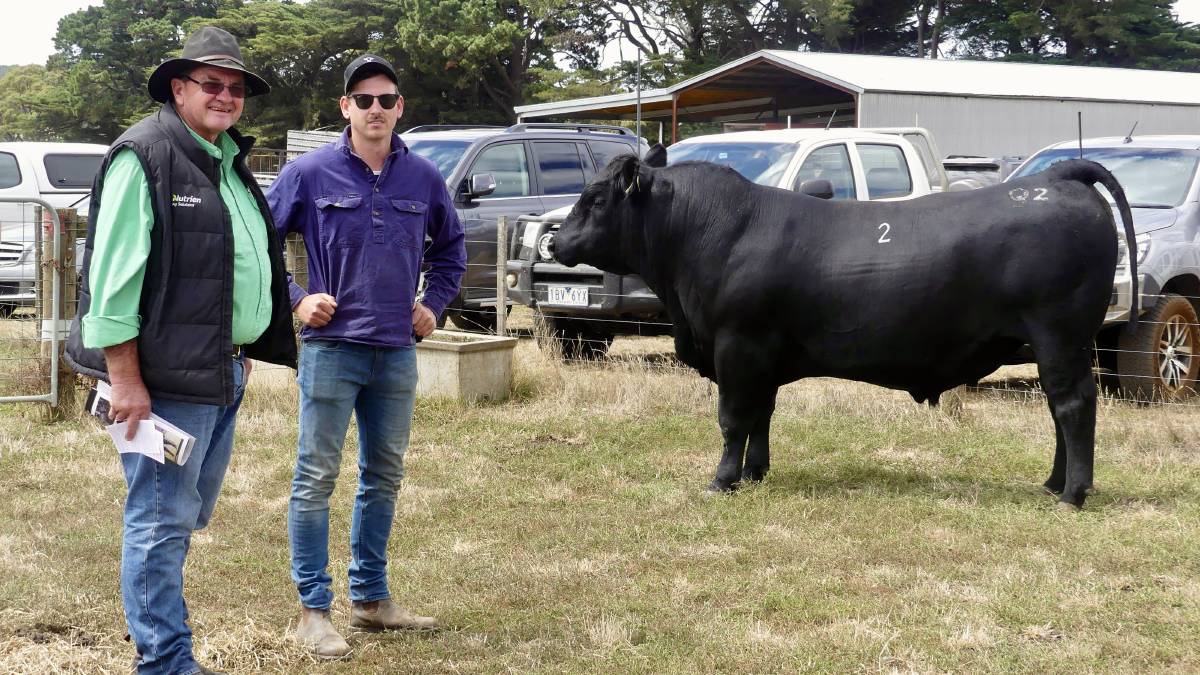 WEERAN Angus welcomed one of its biggest crowds ever to its autumn bull sale, which saw a very strong clearance rate and one of its best ever average prices.

The bull was a seven grading sire in the top 11 per cent for 600-day growth and scrotal size and top 6pc in carcase weight.

Mr Lewis said his family had been buying from the stud for nearly 10 years and had come to view the bull a few different times prior to the sale.

He favoured its frame and his figures, he said, and planned to join him in May.

Weeran stud principal Alec Moore said Nareen would have purchased about 200 bulls from the stud over the years.

Mr Moore said the sale was a great result with the first 30 bulls particularly good quality.

He said sires Lawsons Momentous and Ascot Hallmark were making their marks.

"The Lawson bull was outstanding, they're really good types of cattle with huge eye muscle areas and great intramuscular fat figures," he said.

"As far as carcase is concerned you can really rattle the cage and improve your herd.

"The top-selling bull is an Ascot Hallmark pedigree, Bellaspur Hallmark, and he is an exceptional bull for structure and type.

"His temperament is so good, we walked him around and every time he stood like a champion."

The stud runs two sales a year and this was the largest number offered at the autumn sale, he said, with about 10 more bulls added to the catalogue.

"It's a very discerning public, they won't buy rubbish," he said.

"If you're really trying to tick all the boxes as we are, it's great to be able to attract people to high quality animals and paying a fair and reasonable price."

If you're really trying to tick all the boxes as we are, it's great to be able to attract people to high quality animals and paying a fair and reasonable price. - Alec Moore, Weeran Angus stud principal

He was pleased to see producers rewarded with high prices at the recent weaner sales, which was now having a flow on effect at the stud.

"We're certainly seeing more demand for bulls and higher prices being paid for bulls," he said.

"Bulls aren't dear though... a bull doesn't have to deliver a lot to pay his way."

Mr Moore said the average price at this year's sale was significantly higher than other years, about $1200 better, he estimated.

"It is a lot of work, you don't just breed them and just two year's time run them into a pen, no matter how good the genetics are."

The two bulls that did not sell under auction were both purchased after the sale.

Kerr & Co livestock manager Brady Hicks said it was a very strong sale and noted the large crowd in attendance.

"It was good to have a bit of support online as well as physical.

"It was probably the biggest crowd we've had here in both autumn and spring sales."

He said the bulls were sold to a range of places, with buyers coming from as far as Gippsland and South Australia.

He said online buyers started the bidding in many cases and created plenty of competition, as well as purchasing four bulls.

"The job was just that red hot that everyone had to pick and choose and go a bit deeper into the catalogue which is what you want as a seller, that's for sure," he said.