A leading Goulburn Valley orchardist has described what he says is the state government's belated support for the horticultural sector as "a little bit insulting." 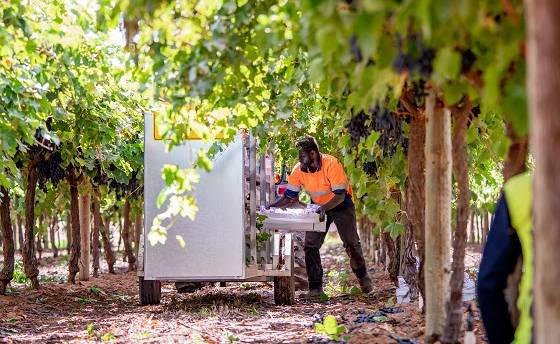 HARVEST HELP: While Victorian fruit growers have welcomed the state government's asistance to help overcome labour shortages, they say its too late for this season.

It also announced further support for job-seekers who take up seasonal work, under the Seasonal Harvest Sign-on Bonus.

But Shepparton orchardist Peter Hall said while any government help was always welcome, it was regrettable Victoria had not acted fast enough.

"It's an awful shame the state government has squandered an opportunity to work with us and ignored industry information," Mr Hall said.

"We have been telling them, from May last year, it's unlikely locals will want to do this work.

"I am a bit shocked the government has taken so long - most growers are extraordinarily frustrated and bewildered by the government's lack of action.

"Suggesting we can do something now, as we are getting to the end of our fruit season, is a little bit insulting."

Most growers would face challenges in spreading the cost of $2000 over a short time, he said.

'This is an issue that crept us, over the decades, and it reaffirms what growers understand - Australians really aren't interested in this type of work any longer.

"We need to find a suitable source of labour, to help us."

Mr Hall said that was no criticism, simply the reality of the situation.

"Even in the worst unemployment crisis in a number of years, very few people are willing to relocate and get their head around manual labour.

"That's just the reality, there is no criticism in that, let's just accept it."

He said the Pacific Island worker solution had been very successful.

"We call on state and federal governments to make access to countries -where workers are willing to do this sort of work, to be paid under Australian awards and work under Australian conditions - made easier.

"At the moment it's highly regulated, which is a barrier."

He said a short term, seasonal workers visa would be more appropriate.

"They can fly over, work, earn Australian wages and take it back to their villages and towns

"They could earn more than they could, in a six-month period, than in a number of years at home."

He said it would be a "win-win" for both the Pacific Island countries and growers.

FruitGrowers Victoria industry development officer Michael Crisera said the Goulburn Valley would be past its peak, by the time the workers came into Victoria.

"But for the long term, any workers coming into the country are going to help, that's how I look at it, Mr Crisera said.

He said the $2000 quarantine co-payment may seem a lot, but it could be spread over nine or ten months.

"They can get that money back, over time," he said.

The William pear harvest had been completed and Gala apples were nearing the end of harvest.

"The Pacific Islanders give certainty to the growers that take them on.

"They are not for every grower, some would not be able to afford it, if they wanted 30 workers."

"We have been banging the drum for I don't know how many months now, but some news is better than no news."

And FGV president Mitchell McNab said it unfortunate the decision came too late.

"This week, next week and the week after are our peak season, particularly in the Shepparton region," Mr McNab said.

"I think it will help some other regions, but for the pome and stone fruit, it's a bit too late.

"We are scratching to get by with the workers we have got."

He said FGV had worked with the Greater Shepparton City Council to produce a video, "Pick Shepp", promoting harvest work.

"We have been drawing a few people out of Melbourne through that system, it hasn't been big numbers, but it's been a few here and there, to help growers get by.

"Some of the fruit is not being harvested at its most optimum maturity."

He said it also meant there were more labourers required to get crops off.

"At the same time, it means we are having to extend our harvest, picking a variety that we should be picking for 10 days may mean we are picking for 15 days."

"We are paying more for other our harvest staff helping to supervise, to assist those with lower productivity."

"It isn't there to get the jobs done on time and it's making life very hard for farmers," Mr Free said.

It was "pretty much" too late for workers to come, for many parts of the sector.

"Farmers are a very resilient lot and they will always try their best to get things happening, but it's putting a lot of stress on farmers, farming families and the industry as a whole.

"Crops are not meeting the markets they need to, and other jobs, like planting and pruning, aren't being done on time."

Applications for workers were done, when the season started last spring.

"Everyone who was applying for those workers has to go out and alter all their paperwork."

While there would be benefit to grape and citrus growers, many farmers had been affected.

"There's a lot of farmers, gone through a lot of hurt, with this government sitting on its hands, in the way of labour.

"They didn't sit on their hands very long, to make sure people got in to play tennis.

"A lot of farmers are doing it really tough."

He said all farmers wanted was certainty.

"We are planting crops now, we need to harvest in six, ten 12 months, or tree crops that will be ready in three years, but they are all going to need workers to get the basic tasks done," Mr Free said.

"I am pretty sure our government should be able to figure out some basic planning, so everybody can relax a little bit."