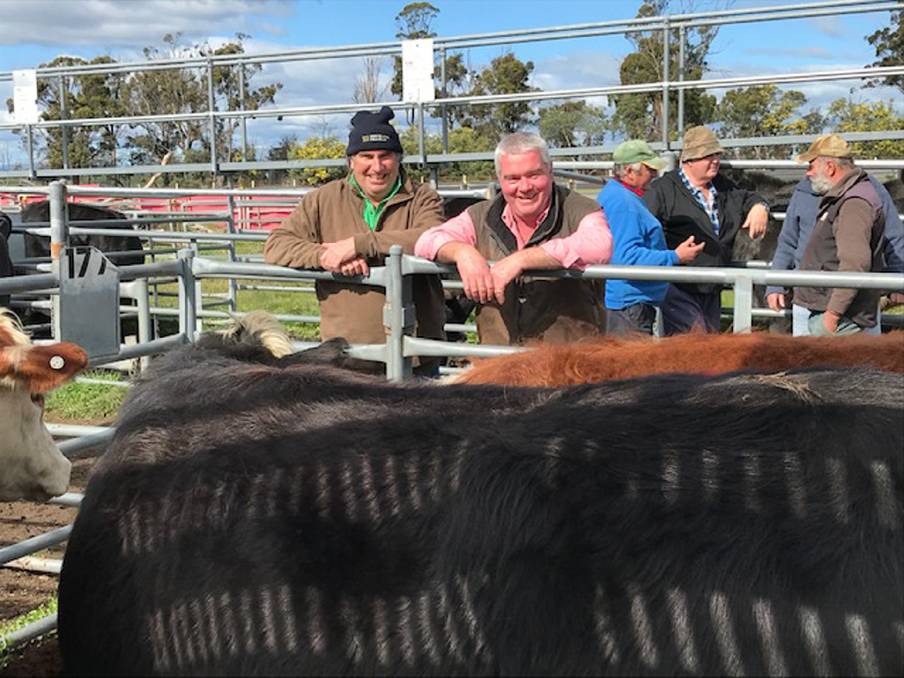 CLIENT: Martin Hall, Elders, with George Shea, Hamilton, southern Tasmania, at a previous Powranna sale, viewing heifers and calves at foot that made $2150.

Tasmanian steers top 700 cents a kilogram in a strong sale.

Prices for lighter steers at the Powranna, Tasmania, weaner sale, matched those on the mainland, with stock selling for more than 760 cents/kilogram.

Agents yarded 2173 head of cattle, with several large consignments from Rushy Lagoon and other vendors.

Warren Johnston, Nutrien, said it had been a "fantastic day.

"We are sitting on a phenomenal season, here in Tasmania, although the last 10 days has started to dry off a bit," Mr Johnston said.

"We will certainly come forward with some larger numbers of cattle, over the coming weeks."

He said while most of the competion was from locals, there was a contingent frm Tamworth, NSW.

"We had a lot of people viewing, on AuctionsPlus, but everything stayed locally."

He said another 440 Rushy Lagoon calves were booked in for the next sale, in early March.

"The quality of the calves was very, very good, all the calves had bloom and freshness about them and they presented very well.

"It was traditionally just a store cattle sale."

Mr Johnston said the good season, coupled with postive forward contract prices put out by the major processors, had boosted confidence in the market.

Meat & Livestock Australia reported a large percentage of weaners, which would normally be held over until March, were yarded early in sale of 'extreme" price levels.

Producers had brought stock forward, due to high prices.

Competition came from the north-west, north-east and northern Midland backgrounders and grass finishers.

One vendor hit paydirt at the Tasmania Livestock Exchange, with two pens of light Angus steers.

Heifer prices were not far behind, with a pen of 20 Herefords, from Rushy Lagoon, making nearly 680c/kg.

The property also sold stock for more than 700c/kg - with prices climbing steadily, as weights fell.