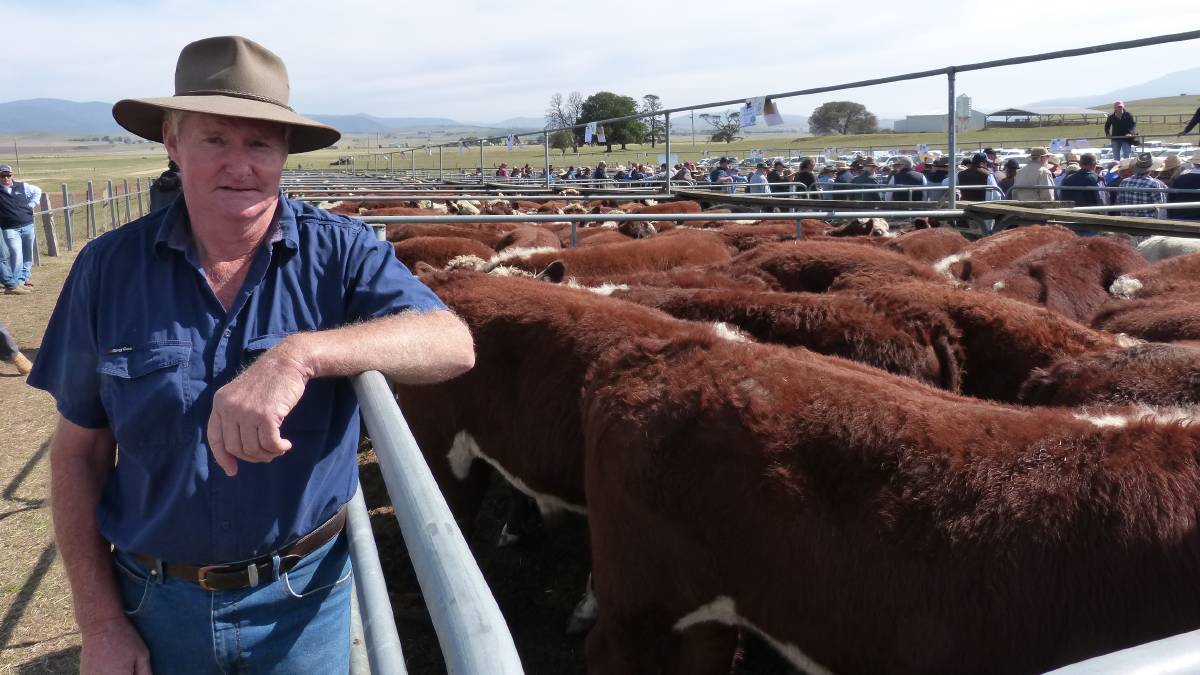 Benambra sheep and cattle breeder Peter Soutter says he cannot remember a time when wool and beef prices were as strong as each other at the same time.

The fourth-generation farmer runs a herd of Hereford cows and 2500 Merino sheep and said the high prices for both commodities were hard to believe.

"In the last few years wool and beef have both been pretty good and that's the first time in my farming career I've seen it like that," Mr Soutter said.

"Normally one is good and the other is not so good and vice versa but at the moment they are both strong despite wool coming back a bit."

Mr Soutter, and his wife Sue, run the enterprise from their 120-hectare home block, Ellerslie, but the total operation spans 1215 hectares across Benambra.

Next month the couple, with the assistance of their daughter and son-in-law, will offer 70 Hereford steer calves at the first Mountain Calf Sale run by Sharp Fullgrabe at Hinnomunjie on March 2.

A further 35 Hereford heifers will be offered at the Elders Benambra sale later that day.

"The market is excellent at the moment but we don't want it to get any dearer because it will become like the wool market, when it gets too hot it will suddenly crash," Mr Soutter said.

"The guys buying our calves need to make a dollar out of them at their end.

"We also need them to return and buy our calves next year and the year after that."

The May and June 2020-drop steer calves are by Nunniong and Karoonda Park bulls and in the last few years have been bought by South Gippsland and local bullock fatteners.

"It's excellent this year compared to 12 months ago when we were smoked out with bushfires," he said.

"We even have green feed this year which is unusual for January and February."

"I don't think our calves are as heavy as last season even though we've had a better season," he said.

"That's my cattle - I don't know about everyone else's cattle - but January was cold and I don't think the cattle did as well as they normally would for that month."

The Soutters rely on bore water for their stock but said Benambra was in need of a wet winter this year.

"The dams aren't spectacular," he said.

"We've had three dry winters so our dams need some water running into them and that only usually happens in a wet or normal winter but we haven't had anything like a normal winter here since 2016."

He said on the up side, the overall strength of the beef and wool markets meant it was a good time to be a farmer.

"The price of old sheep we sell, the wethers and old ewes, certainly make up for the shortfall in wool," he said.

About 1200 calves will headline the first of six Mountain Calf Sales when Hinnomunjie's annual sale starts on March 2.

Sharp Fullgrabe director Graeme Fullgrabe said there had been "enormous inquiry" in the sale's lead up.

"The calves are looking as good as ever and it will be a very even line this year."