The Ensay calf sale will return this week a year after bushfires forced the sale to be cancelled. 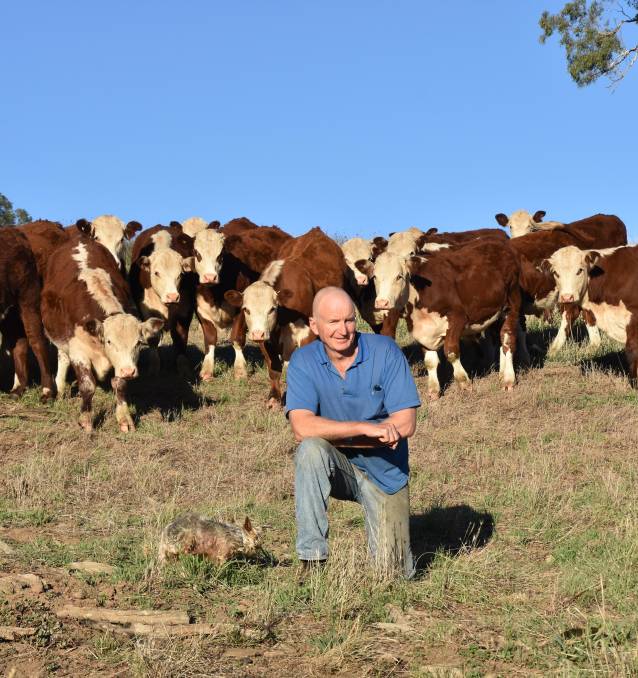 FINE FORM: Craig Lloyd, Reedy Flat, lost a third of his property during last summer's fires, but says the cattle and country have bounced back well.

It's the first time we were burnt that bad but we've had a few scary times beforehand; it was a pretty stressful time because often you would walk out and think 'where do I start'. - Craig Lloyd, Reedy Flat

Twelve months ago, Reedy Flat producers Craig and Jane Lloyd were focusing their attention on rebuilding infrastructure after fire had torn through their property two months earlier.

About a third of their farm was burnt during last summer's horrific bushfires, damaging more than seven kilometres of fencing and wiping out what pasture they had after three years of harsh drought.

Like many in the immediate Ensay district, the Lloyds opted to sell their calves ahead of the March calf sale.

"Our calves last year were sold two days before we got burnt," Mr Lloyd said.

"We had no idea we were going to get burnt at that stage but the fire had come right around us so we thought it was time to sell them."

The devastating fires led to the cancellation of Ensay's calf sale, the first time the sale had not been held since the mid-1960s.

The Lloyds said they felt indebted to the local community for its support following the bushfires, especially BlazeAid volunteers, who came and removed the burnt fencing.

"It's the first time we were burnt that bad but we've had a few scary times beforehand; it was a pretty stressful time because often you would walk out and think 'where do I start'," he said.

Next month the Lloyds will offer 60 Hereford and Hereford/Shorthorn-cross steers when the annual calf sale returns to the Ensay yards on March 3.

Reasonable seasonal conditions and strong market prices have added confidence to their outlook.

"If the market stays like it's going at present, we will be very happy," he said.

The April and May 2020-drop calves are by Newcomen, Mawarra and Injemira bulls.

"The top calves we expect to weigh about 380 kilograms and that's due to us having a better season than previous years," he said.

Mr Lloyd said 56 calves were weighed on the farm and split into four pens.

"We were very pleased with those weights and think the calves have done considerably well."

A particular focus for the couple at their 445-hectare Sherwood property is docility in their calves.

"The feedback we get from the repeat buyers is about how calm the animals are," Mrs Lloyd said.

"We go for good, easy-doing, calm bulls and even with our handling practices both in the yards and in the paddock we are very calm and patient.

"We think it helps with their development because when they're not stressed, they concentrate on eating and living calmly."

The Lloyds will retain their heifer portion, including the top 70 per cent as breeders, and fatten the balance to sell at a later sale.

"As long as we've been going, we've been breeding cattle specifically for this sale and to come out after the bushfires and be heading into a sale with such strong demand has made our job easier," Mr Lloyd said.

Ensay calf sale to return after a 2020 hiatus

Ensay's iconic Mountain Calf Sale will return next week more than a year after fire swept through the district, forcing vendors to offload their cattle six weeks earlier than planned.

About 1000 cattle will be yarded for the first sale of day two of the weaner series, with several of the headline vendors, affected by last summer's bushfires, set to reap the rewards.

"We brought the Ensay sale forward last year to January because a lot of the vendors who would normally sell in this sale had been devastated by the fires," Elders Bairnsdale livestock manager Morgan Davies said.

"The local Ensay producers are a pretty resilient bunch so it's a credit to them for sticking it out over the last 12 months.

A cornerstone of the sale will be 400 autumn-drop Hereford and Hereford/Shorthorn-cross calves offered by the Newcomen family of Ensay - Evan and Dot, Barry and Topsy and Reece and Wendy.

On Monday, agents weighed some of cattle from several vendors which are set to be yarded at Ensay.

"We found the tops of the calves weighed between 400-420 kilograms and the second drafts weighed on average between 380-400kg," Mr Davies said.

"It's hard to compare that to last year because the calves are being sold six weeks later but it gives vendors an indicative idea of how well the cattle have presented."

He said he expected support from Gippsland buyers to be very strong.

"Like most of these calf sales, we expect return buyers to dominate a lot of these pens because they know the cattle perform and return each year because of their overall satisfaction with what they get at Ensay," he said.

"So a lot of these cattle go to return buyers each year and they're from all parts of Gippsland."