ICON: Heritage-listed Warrayure is on 405ha and was founded by Stephen Henty in about 1860.

Both of these early Victorian farms have the Grampians as a stunning backdrop.

Two of Victoria's oldest farms have been sold.

Both are in the Victoria Valley with the Grampians as a stunning backdrop.

The 482ha Barrahead was established in 1838 by Thomas Woolley and was offered for the first time in more than a century.

Heritage-listed Warrayure is on 405ha and was founded by Stephen Henty in about 1860.

To give context to the age of these properties, the Hentys were Victoria's first European settlers, arriving at Portland in 1834.

What is believed to be the state's oldest still operating farm, Merino Downs in the Western District was established by Stephen's brother Frank, in August 1837.

The Henty's only travelled inland on the advice of the state's first explorer Major Mitchell who was surprised to find the Henty brothers at the coast, who returned their hospitality with the free property tip.

Warrayure is expected to settle in the next few weeks having been sold to two neighbours.

The asking price was around $5 million.

Barrahead has just been settled and was listed for sale at between $3.6-$3.9 million.

"I can say it sold in excess of that," agent for both properties, Andrew Dufty of Charles Stewart Real Estate, said.

Mr Dufty said both properties were originally planned to be sold at auction which had to be cancelled because of the pandemic, and were sold by private offers.

"It sold to people from out of the area but had district connections," he said of Barrahead.

Warrayure is a portion of the original Victoria Valley run, established in 1838 by Thomas Woolley, and was offered for the first time in more than 100 years. 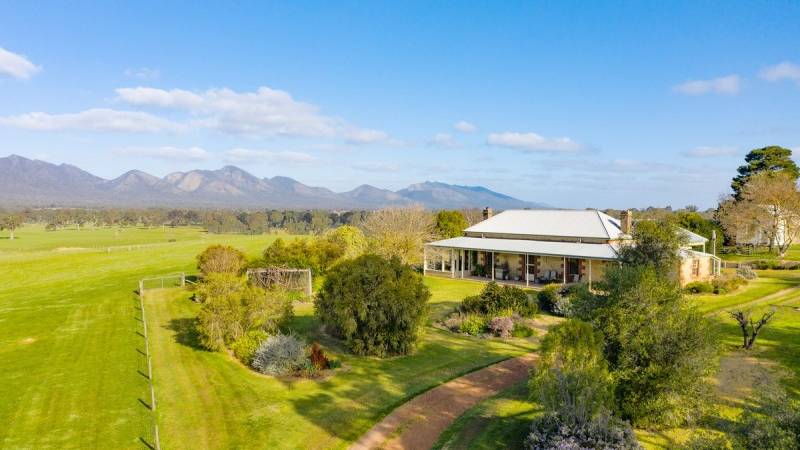 WHAT A VIEW: The 482ha Barrahead was established in 1838 by Thomas Woolley and was offered for the first time in more than a century.

One of the many interesting historical features of the grazing property was the involvement of Melbourne architect John Shanks Jenkins.

At the invitation of Henty, Mr Jenkins designed the blue stone homestead and some of the outbuildings, which also includes a small jail.

The property runs a mixture of prime lambs and cattle.

On Barrahead, Mr Dufty said the property would likely continue as a grazing property with the new purchasers also buying some of the previous owner's sheep.

"With the Grampians at the back, it has one of the best views on a rural property I have ever seen," he said.

He said for demand for grazing country in the region was unprecedented.

"With strong commodity prices, low interest rates and the lack of this sort of country ... it has pushed everything up.

"Property has become the safe haven for investment during COVID-19," he agreed.