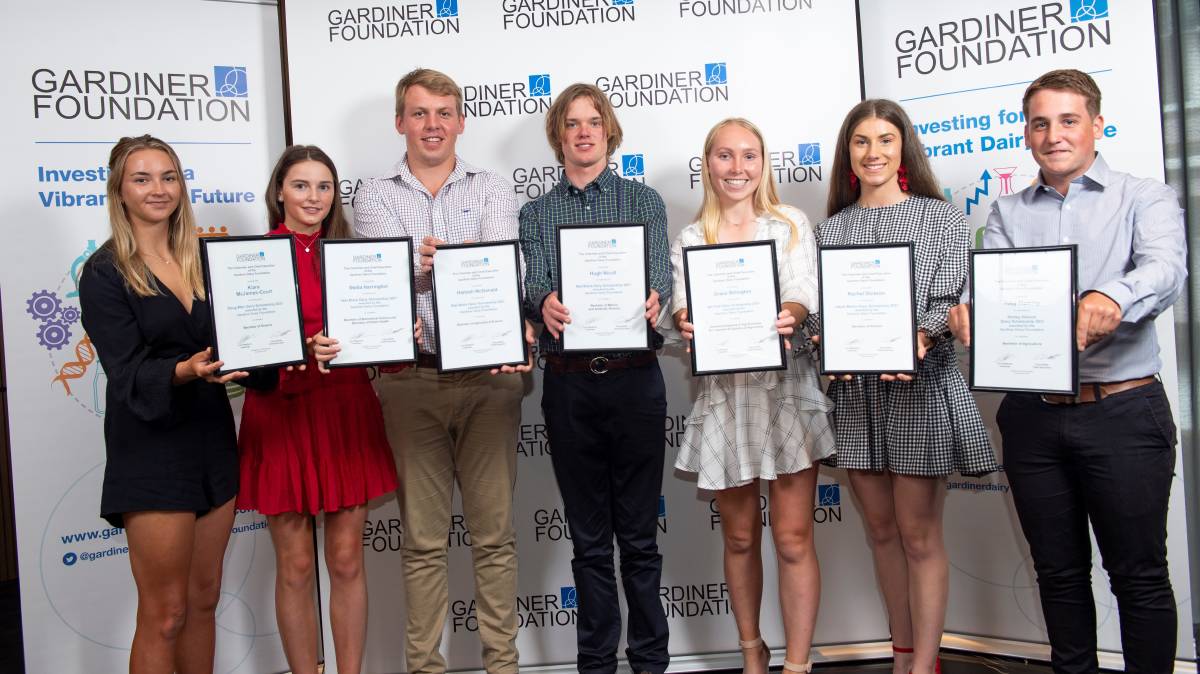 Seven tertiary scholarships have been awarded to students from Victorian dairy regions who are commencing their first year of tertiary study in 2021.

The 2021 Gardiner Dairy Foundation and Niel Black tertiary scholars are:

The scholarships are awarded annually to students have shown a commitment to leadership and personal development and who intend to return to regional Victoria at the completion of their studies.

In addition, they must demonstrate sound academic achievement and having contributed to their community.

The scholarships are named in recognition of the significant contribution to the dairy industry made by Shirley Harlock, Jakob Malmo, Bill Pyle, Doug Weir and Niel Black.

Each scholarship recipient will receive $10,000 annually for up to three years to contribute towards costs associated with their studies.

Gardiner Dairy Foundation chief executive Dr Clive Noble said the scholarships supported the development of young professionals who may not otherwise have the opportunity to pursue higher education.

"Rural students face high costs associated with living away from home to undertake higher education and training," he said.

The tertiary scholarships program encourages students to return to Victoria's dairy regions upon graduating, or after gaining further work experience, to ensure a diverse range of essential skills within these regions.

"These scholarships align with the Australian Dairy Plan in encouraging people who have obtained tertiary qualifications to make their careers in the dairy industry and its varied communities," Dr Noble said.

Applications for 2022 Tertiary Scholarships will open in September 2021.

Kiara has grown up on a family dairy farm at Pound Creek in South Gippsland and completed VCE at Newhaven College, Phillip Island. She will study towards a Bachelor of Science, majoring in animal science at Deakin University and hopes to become a vet working with large animals.

Farming and community are extremely important influences in Kiara's life. She has had extensive involvement with her local surf lifesaving for the past nine years and has volunteer-patrolled over 430 hours. She has been involved in Landcare in both the broader community and through increasing tree plantations on her family's farm.

Stella completed year 12 at Trinity College, Colac in south-west Victoria and will be studying a Bachelor of Biomedical Science and a Bachelor of Public Health at Australian Catholic University.

She is involved with the Anglesea Surf Lifesaving Club, volunteering her time to patrol the beaches and she has also coached both basketball and netball teams.

Stella has also been involved with Neighbourhood House's 'homework club' helping to educate migrant children into the region. She is keen to improve the health and wellbeing of rural communities and to support better access to health care in regional and rural areas.

Hamish completed VCE at Clarendon College, Ballarat and will be studying towards a Bachelor of Agricultural Science at Melbourne University.

In his local community, Hamish has been involved with the football/netball club, cycling club and rowing club. In 2019, he travelled to Cambodia for a humanitarian project building a well and a toilet in a remote community.

Hamish is currently working on a dairy farm in Larpent. On completion of his studies, he would like to return to south-west Victoria and work in the dairy industry with a focus in agronomy.

Hugh grew up on a family dairy farm at Fish Creek in South Gippsland and attended Foster Secondary College where he was school captain. He will be studying a Bachelor of Marine and Antarctic Science at the University of Tasmania.

Hugh has volunteered his time to assist with the Lyrebird population survey in his local bushland and the Great Victorian Fish Count. He has also been involved with increasing tree plantations on his family farm.

Through the Scouting movement, Hugh has volunteered annually at the local agricultural show, participated in Clean up Australia Day, Relay for Life and other community activities.

Hugh values a healthy environment, ocean and ecology and the importance of protecting and conserving ecosystems. He wants to enhance land management and help inform farmers on how to best preserve their own environments with positive flow on effects to the broader ecosystem.

Grace completed VCE at Brauer College, Warrnambool and will be studying an Advanced Diploma of Agribusiness Management & Diploma of Agronomy at Longerenong College. She is an active member of the Warrnambool City Netball Association where she volunteers as a coach, mentor to younger umpires, and runs the program for 5-6 year olds.

She is also part of the Junior Committee for the Netball Association where she contributes to running fundraisers and an all-abilities competition.

She is currently working on a dairy farm in Allansford and is looking forward to moving back and working on a larger dairy operation once she has completed her diploma.

Rachel grew up on a dairy farm in Garvoc, south-west Victoria where she attended Emmanuel College in Warrnambool. She will study a Bachelor of Science at Melbourne University, majoring in animal science.

Rachel has had experience working on dairy farms in Australia and the UK. She has shown cattle at local shows, and in recent years has taken a lead role in helping younger students develop their skills.

She also volunteered in Timor-Leste teaching English to young children.

Rachel's future aspiration is to work in the dairy industry in areas that involve animal health.

Toby grew up on a dairy farm at Boorcan in south-west Victoria. He completed VCE at Mercy Regional College at Camperdown, where he served as college captain.

He will be studying a Bachelor of Agriculture (Technology) at the University of New England and hopes that through his studies, he will gain skills to be part of the development of new technologies that are more financially accessible to all farmers.

Toby is an active member of the Boorcan cricket club where he has taken on the role of groundskeeper. In 2019, Toby was selected as a Rural Youth Ambassador to talk with politicians about ways to provide better and more equal education for rural students.