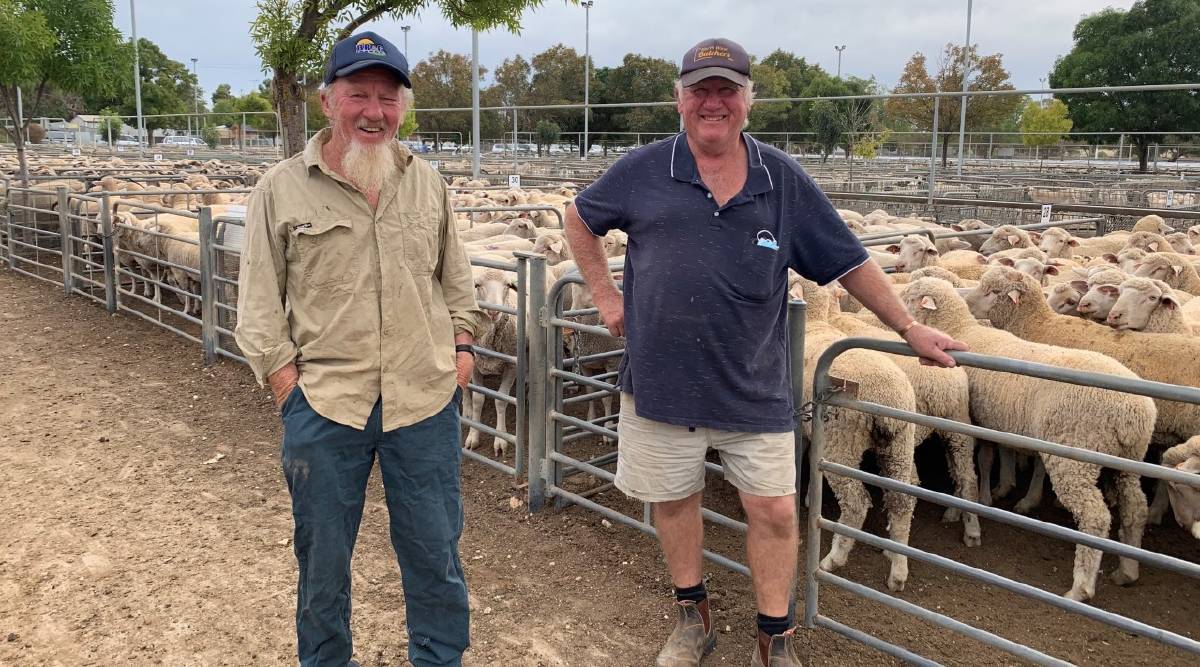 SELLER: Moggy Stone, Torrita, was among the vendors at the Ouyen sheep market on Thursday last week. He was photographed with Kevin Grayling, Walpeup.

The lamb market is knocking on the door of record prices again with the auction system finishing last week on a very strong note.

The headline was a new high this year of $335 a head for a pen of lambs at Wagga Wagga, NSW, last Thursday.

The lambs had been estimated to weigh 44 kilograms carcase weight and were finished in a feedlot situation.

The Wagga Wagga saleyards also had lambs go above $300 on the same day with the National Livestock Reporting Service quoting prices $8 to $15 per head dearer to average 788 cents a kilogram carcase weight to 860c/kg cwt.

It is big dollar a head returns, but on a carcase weight basis it is the medium and heavy trade lambs weighing between 21kg and 24kg carcase weight which are making the best returns.

Heavy mutton prices were pushed along by Fletcher International at Dubbo, NSW, with prices for heavy sheep lifting $15 to $ 22 to average 618c/kg cwt.

The national price indicator for heavy lambs, despite the significant gains in NSW last week, settled 1c/kg higher to rest at 840c/kg.

There has been no major change to the price trajectory of lambs with the season continuing to be the major influence ahead of robust export demand.

In opening sales prices for most weights and grades have only shifted up and down by a few cents a kilogram carcase weight as the industry waits for clearer signals about the season and the potential for another extraordinary autumn.

The heavy lamb market is a key example with the national indicator showing no change sitting at 842c/kg carcase weight on Monday evening.

So far the heavy lamb indicator has moved sideways post-Christmas.

At Bendigo heavy export lambs were in high demand with prices rallying $8 to $15.

Trade lamb rates sold either side of firm with some lambs dragging rates back due to the lack of finish.

Full rain gauges were the hot topic at Corowa, NSW, lamb sale on Tuesday with some producers recording up to 70 millimetres of rain.

The smaller yarding of 9400 lambs and 3300 sheep offered another outstanding quality offering, with most lambs grain assisted or finished off on lucerne stands.