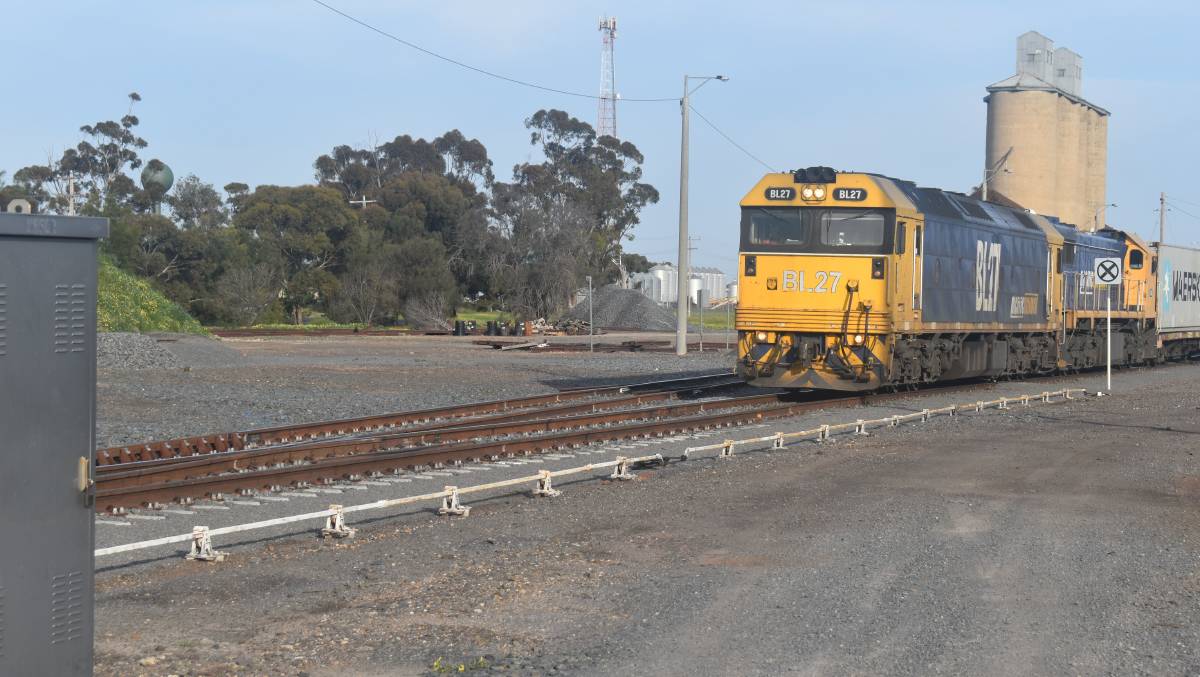 Analysis of Victorian grain freight movements shows just over 500,000 tonnes of grain has gone by rail since November 1, last year.

A large percentage of broad and standard gauge locomotives are currently out of service, as they are being repaired or stored, due to breakdowns, compounding the problem.

Most locomotives are 30 to 65 years old.

The rail enthusiast, who analysed freight movements for Stock & Land, said that at current haulage rates, up to three million tonnes of grain were likely to be moved by rail, this year.

"That's not a great result, given that nine million tonnes has been harvested," the enthusiast said.

"So unless more trains run, we are probably looking at 30pc by rail and the rest by road, or kept on-farm or at various other storage sites."

In previous years, the split has been up to 50 to 60 per cent by rail, with the rest by road.

The state government confirmed half a billion tonnes of grain had gone on rail, to port, since November 2020.

But it disputed the figure that only 30pc of the crop was likely to go by rail.

"We're getting on with delivering the next set of works on the Murray Basin Rail Project - giving farmers and freight operators certainty and getting more Victorian freight on rail," a spokeswoman said.

"Farmers are already benefiting from the project's works to date - returning freight trains to the Mildura and Murrayville to Ouyen lines, reopening the Maryborough to Ararat line after 15 years and significant upgrades to the Hopetoun, Manangatang and Yelta lines."

A GrainCorp spokesperson said in an average year, the split between road and rail was 50-50.

"We'd obviously like to see rail transport prioritised, where it's the cheapest freight option to port for growers," the spokesperson said.

"This would increase the split to 70pc of tonnes hauled from GrainCorp sites by rail."

Cargill's Corporate Affairs Director Peter McBride said it was likely the split, this year, would be 70pc rail and 30pc road.

It also comes when major resleepering work is occurring on the Manangatang and Sea Lake lines, knocking them out of commission.

But Riordan Grains managing director Jim Riordan said the company expected to shift between 150,000 and 2000,000 exra toness of grain, by road, in the first half of the year.

Most of that would go to Geelong and Portland, through subcontractors and farmers.

"This means about 30 extra loads a day to port, over normal years without exports, for a six month period carrying 43tonnes per load," Mr Riordan said.

Rail Freight Alliance chief executive Reid Mather said the Department of Transport had asked him if he knew what quantities of grain, oilseed and pulses were going on rail.

"If the DoT doesn't know, we are in a world of pain," Mr Mather said.

"What I do know is that if the Victorian government plans to have all freight go by road, and all passengers by rail, they should probably say so.

"We are going to have an increased freight task, so why on earth don't they start to plan for that now."

Mr Mather said because the state government had not finished the Murray Basin Rail Project, it was taking three hours longer to bring freight from the region to Melbourne.

He said recent Federal government funding would only repair, or replace, poor workmanship on the Maryborough to Ararat line.

Late last year, the federal government committed $200.2 million to remediate parts of the MBRP, half-finished after it ran out of money.

The funding also includes $5 million for a plan for the freight network's full standardisation, a figure the commonwealth expects the state government to match.

In October the Victorian government announced a further $48.8m funding for the project.

In announcing the MBRP, the state government said it would take 20,000-grain trucks off the road.

Mr Mather said the recent federal funding would only repair, or replace, poor workmanship on the Maryborough to Ararat line.

"They are going to invest a quarter of a billion dollars, to take half an hour off the trip, because you are going to re-rail what you have already done," Mr Mather said.

"Once you put something on a truck, it will stay on a truck, until you get to its destination."

"Trucks will be going directly to port, with bulk commodities, which could have arguably gone on rail."

Rail Futures Institute president John Hearsch said it would be another six months before the full picture would emerge as to what proportion of the crop went on rail, and what went on road.

"I don't believe the authorities had a plan for the grain harvest, it was a case of just let it run and hope that it works out," Mr Hearsch said.

"I guess they just rely on what people tell them, and what sort of advocacy they get.

"I don't think there is any science to it."

He said, "a fair amount" of this year's harvest appeared to have gone into storage, either with grain accumulators or on-farm, and wouldn't be exported until later in the year.

"Rail nowadays is not as good, as it once was, to deal with massive harvest surges - but that's mainly been compensated for by the amount of storage, particularly bunker storage, upcountry.

"One would hope a large proportion of that upcountry storage, which is going to be reserved for export, will end up on rail."

He said the rail operators, such as PN, SSR and Qube, were busy and believed some would be close to their limit.

Mr Riordan said there were an extra 150 loads a day, compared with last year, being taken between Geelong, GrainCorp and Archer-Daniels-Midland, Portland.

"The horse has bolted on rail and road years ago," Mr Riordan said.

"That won't change, given trains can only unload at export terminals not domestic, feedmill, other end users or export container packing facilities."

Mr Riordan said farmers were building more and more of their storages and marketing grain, direct to port or domestic markets, in low export years.

A lot of farmers also had trucks.

"Farm to ship direct is the least cost path," he said.

"The train doesn't go to every farm, so the train needs to be so much cheaper to save the double handling charges in the supply chain.

"The biggest market is the delivered market and farmers can sell all year round now and have far more financial products to help them carry the grain at home."

Mr Riordan said regional areas needed to get a larger slice of the budget, to keep roads safe for all users.

"And get the MBRP finished, to help shift large crops.

"As we all can't guarantee rainfall and production we need a flexible low capital cost supply chain to stay ahead of other countries around the world."

"That's not a figure that surprises me at all."

He said it had also been busy at the Geelong export terminal.

There wasn't a "hope in hell" of getting trucks off the road.

"They are just pulling a number out of the air, I am not sure how they are coming up with the figures, we are certainly not seeing it."

Mr Milgate said it would appear to be a lot more efficient to put 2000 tonnes of grain on one train to Geelong, than send 50 B-Doubles from a site like Murtoa.

"But the reality is that it's quicker to put it on a truck, from Manangatang, which is just crazy," he said.

Trains will be restricted to 25 kilometres an hour on a 63 kilometre section of the Rainbow to Dimboola line until June 2022, due to decayed and damaged sleepers, according to V/Line's Weekly Operational Notice.