A move by some farmers to remedy the shearer shortage by doing the work themselves has been described as a Band-Aid. 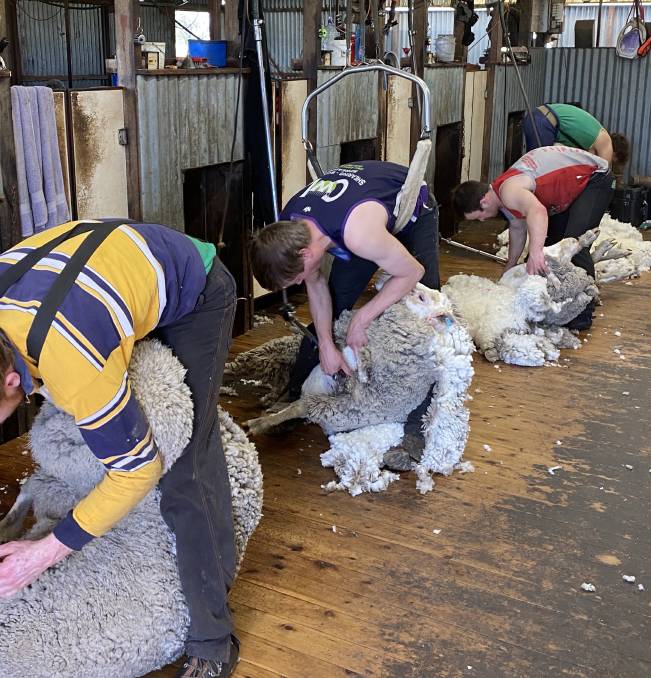 Some farmers are working around the shearer shortage by having a go themselves.

A move by some farmers to cut through the shearer shortage by doing the work themselves has been described as a Band-Aid.

Shearing equipment suppliers from around the country are fielding increased calls from woolgrowers chasing gear with electric handpieces, cutters and combs the popular pick.

Industry leaders say the move is unsurprising given the shortage of shearers, chiefly caused by the loss of New Zealand shearers through the pandemic.

But those same leaders say the pandemic has exposed the industry's shortcomings.

"No one can do anything to make shearers appear magically overnight," WoolProducers Australia chief executive Jo Hall said.

"Our focus as an industry is in the middle and long term, there's nothing we can do about what's happening now."

Shearing contractors are able to demand higher rates of pay for workers and are sometimes delaying shed visits because of the shortage.

"The permanent solution is to attract and retain people to shearing," Shearing Contractors' Association of Australia secretary Jason Letchford said.

"It is not surprising some farmers might have a go themselves, but that's just a Band Aid.

"We're not in the business of supporting Band-Aids ... the main game is getting more shearers into the industry."

Mr Letchford cautioned the industry from considering support for the move by some farmers.

"We don't want to be pouring resources into training, for instance.

"For people who might only do it (shear) for one or two weeks a year.

"We have to be looking to the future."

More reading: Growers may be forced back to 12 month shearing

Not all shearing equipment supply stores are yet seeing an increased demand from farmers, but most are.

Shearing World in Naracoorte, South Australia said the big demand was for handpieces.

"Most definitely there has been a rise in sales to farmers getting back into it," Shearing World owner Darren Smith said.

"They reckon it's better than nothing to plod along and do a few if they can't get shearers.

"They can always keep the gear for crutching anyway."

He said some of the calls were coming from ex-shearers who were looking to join the industry again.

Shearing Supplies in Dubbo said they were also receiving more calls from farmers.

Luke Hall from Australian Shearing Supplies in Bendigo said it might be "early days yet" as he'd only had one or two asking for gear.

This week WoolProducers reminded growers there had been no official increase in the award for shearers and shed hands despite many having to pay above award to secure workers.

"The current situation of woolgrowers having to pay above award rates is a completely commercial arrangement between the woolgrower and shearers or shearing contractors but there is no legal obligation for growers to be paying above the award".

"However, unfortunately for growers there are simply not enough shearers to do the job at this point in time and as with any supply and demand situation, the market must pay what is required to get the job done." Ms Hall said.

The story DIY shearing seen by some farmers as a solution to shortage first appeared on Farm Online.