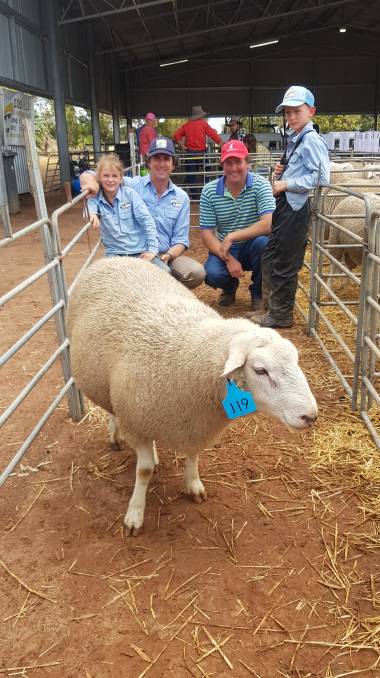 SALE-TOPPER: Lachie Rankin, with the top-priced ram, and Bridie, Chris and Rupert.

While bidding started slowly, the auction finished strong with the top-priced ram, Lot 119, purchased by Lachie Ranken at Boonerah, Hexham, for $4000.

He scored in the top 1 per cent for fertility with the number of lambs weaned at 21.1pc, a yearling number of lambs born of 33.4pc, a scrotal circumference of 7.25 millimetres and a post-weaning weight of 15.7 kilograms.

Currently the number four sire in the country on the Sheep Genetics maternal database, the three-year-old ram has been a star performer for Cloven Hills, now boasting 1781 progeny over 15 flocks.

"He has an outstanding MCP+ index of 183.63, with growth, fertility and scrotal circumference all in the top 5pc," Ms Dorahy said.

"All of his progeny have good early growth and he is as close as we have come to finding it all in one ram.

"This was a carefully considered and somewhat reluctant sale, but the best decision for our stud."

A long-time Cloven Hills client, Ms Scott purchased a total of nine rams to an average $2155.

Mr Dorahy said they were absolutely delighted with the result of their first summer ram sale.