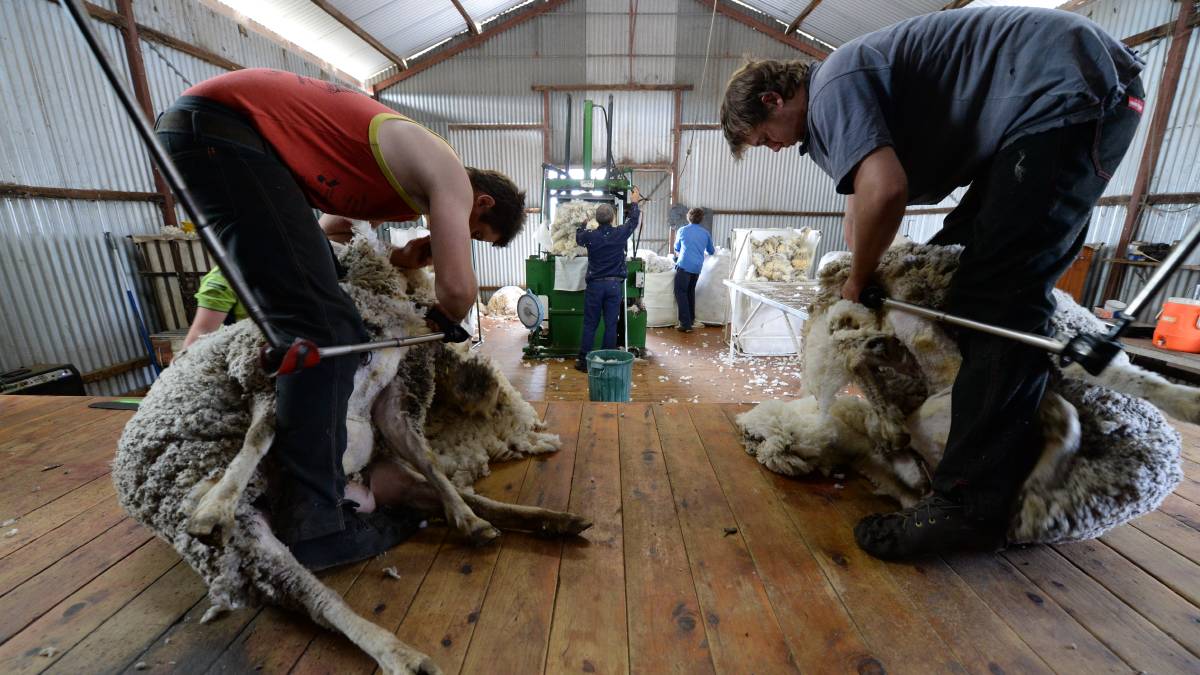 SHORTAGES: Ongoing labour shortages have caused Victorian shearers to be up to a month behind on work.

While better placed than NSW, Victorian shearers are still up to a month behind.

Victorian shearing contractors are up to four weeks behind schedule, as price wars in New South Wales cause further concerns.

Donna Cook from Homestead Shearing Contractors said labour shortages exacerbated by the Covid 19 pandemic had left her a full team short and about three behinds behind.

"We usually plan two weeks to a month ahead of us, with our staff at the moment we're really planning day by day," she said.

"We're not too bad with the shearers, I have had some come down from NSW since Christmas, but I'm really struggling with shed staff at the moment.

"I've given sheds away because I just couldn't do them, which isn't ideal but at the end of the day you do want them to get them shorn."

Others were in a similar position, she said, although contractors were working together to share staff when possible.

"It's just been so hard, we had to go through the border issues, then the shortage of shearers, then you're trying to get as much as you can done, especially at the moment because it's getting warmer and fly and stuff like that," she said.

"It's an absolute nightmare to be honest."

The situation highlighted the need for young people to enter the industry and she was planning on running regular workshops to recruit staff.

It was also important to teach young people a variety of roles within the team to ensure they could fill in different positions, she said.

Rob Crouch from A-Team Shearing Contractors started a month earlier than usual and had still slipped behind schedule.

"Some of my clients, we were struggling to get there and I would have let some go to get their sheep done early but the hardest part was knowing they couldn't get anyone else," he said.

The team was back on track after securing shearers from NSW for a couple of weeks, and more shearers from South Australia were starting to get in touch.

But it could potentially get busier, and he currently had six learners filling shearing positions instead of the usual two.

"Just the way drought's broken up in New South Wales and numbers are just being injected up there so quick," he said.

"If we have another good year in Victoria and New South Wales and get back to average years, well Jesus it could be all on again this springtime coming."

Going forward, he hoped that producers, contractors and shearers would work together so the season could be stretched out to ten months of the year.

Having a stable income would make the industry more attractive to younger people, he said.

"It's such a long road learning how to shear and you get them going after the springtime and when it comes to the autumn time and things start quietening down, well that's where we just lose them," he said.

"Shearing schools have been filling right up and there is big interest from young fellas to take up shearing and I think we're going to be in a really good spot in a year or two, but we've just got to stretch the work around.

"We're still going to accept help from New Zealand but we'll certainly be trying to do as much as we can with all our local boys."

He was concerned that the bidding war for shearers in NSW, that has seen producers offer $4 a head, could impact Victoria.

"Shearing rates will move, they'll be going up in the very near future - I've got no doubt at all," he said.

Farms with poor working conditions would be the ones that would hurt the most when labour was short, he said.

"I just know myself they're sort of the last sheds on the list," he said.

"People want to be working in a good environment - it's a hard job."

"What you've got in Victoria is a more enticing product - you've got a lot of fat lambs down there and proportionately reasonably sized workforce to get them done," he said.

"It's certainly not perfect and there are growers behind still... they're several weeks, maybe a month behind, whereas parts of New South Wales I heard there's a grower that's five months behind.

"Victoria's certainly not at that level of distress at the moment."

He said the bidding wars in NSW were unlikely to prevent shearers from travelling to Victoria, nor would it see a mass exodus of Victorian shearers heading to north, while fat lambs remained more lucrative on a numbers per day basis.

But the higher prices offered in New South Wales was likely to bring an influx of shearers from New Zealand, he said.

"If we end up with Australian teams and Australia shearing contractors pricing their jobs on this market rate of $4 - that's today's rate it appears - then you're going to see people saying, 'I'm very happy to catch some of that action at $3.90 or $3.80'," he said.

"I think we definitely will get an influx of New Zealand workers... I think they'll try their hand at the higher rate then there's plenty of room for them to move lower and offer their services at a lower rate - which will be legal - and why wouldn't farmers take that up for a lower price of production?

"There won't be a lot of loyalty in this."

He said while the price wars might retain existing shearers, it would not solve the ongoing labour shortage issue.

Shearing wages were also not competitive with other industries, he said, which could be part of the reason why the industry's workforce had declined by 32 per cent since 2006.

"The so called auction or bidding war did start with growers, it was a natural commercial reaction to jump the queue," he said.

"No one in Australia thinks $84000 is a lot of money anymore. If we've got 82 per cent of workers earning below what we would consider a reasonably good living, then that must go a long way to explaining why we've lost 32 per cent of our workforce."

"We can't have a scenario where for farmers, the cost of production is too high and they don't want sheep anymore... but we can't have a situation where our workforce is not earning enough competitively with other industries."

He agreed that spreading shearing work throughout the year could help, and the Shearing Contractors' Association of Australia had proposed seasonal rates of pay.

"You would have a peak season of shearing, and that would obviously be spring, and then you could have lower seasons, being winter in Victoria, where they go back to the award rate," he said.

"Those producers that were price sensitive, they would then have an incentive to adjust their farming cycles so they did that shearing process during the low season and get the base rate.

"But those who are not price sensitive, they're big croppers or big in other areas, and shearing is an inconvenience to them and they're happy to do it when it suits them, well they pay the premium.

"Then those workers, instead of being flat out and missing out on work to overseas workers because they can't do it all in that season, then that work is spread out over a longer period of time and farmers would benefit too."