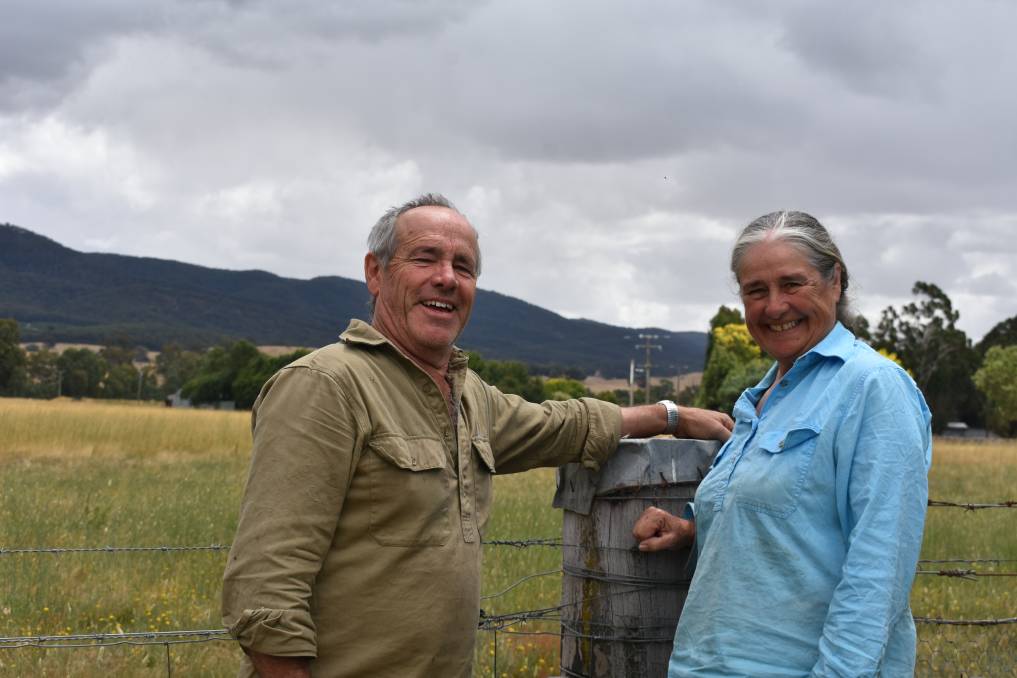 WEANER SUCCESS: Michael and Rowena Stubbe, Gooram Springs, do one thing, and one thing only - produce weaner steers and heifers.

Gooram steer producers, Michael and Rowena Stubbe are a great example of the old adage, "when you're on a good thing, stick to it."

It's a strategy that paid dividends at the Euroa Blue Ribbon weaner sale, with a top price of 705 cents a kilogram for one of their pens. Their 33 steers, 210kg, were among the lightest offered at Euroa, and sold for $1480 a head.

"The markets are high and you have to take these opportunities," Mr Stubbe said.

Ms Stubbe went one further - "it was great," she said.

The Stubbes have a simple philosophy - "all we do is produce weaners, Black Angus and Black Baldy weaners," Mr Stubbe said.

"We have done the sums and over a period of time, and decided that's what suits us."

They run 500 breeders on 810 hectares of hill country, near Euroa, aiming to turn off 450 weaners a year.

They calve in spring and autumn, selling the steers and weaners at seven to eight months old.

We have done the sums and over a period of time, and decided that's what suits us. - Michael Stubbe, Gooram Springs

Big framed, well-bred cows were bought in and the Stubbes use Merridale, Prime Angus, Black Magic and Kilcoolin bulls.

"Ideally, we like to think we produce lovely weaners that are young, have good breeding and are very quiet," Mr Stubbe said.

That's borne out by Russell Mawson, Nutrien Ag Solutions, Euroa, who said the Gooram Springs calves were highly sought after. "They wean them very well, they present them properly and that's the reason people keep coming back, to buy them," Mr Mawson said.

Even after a good autumn, winter and spring, the Stubbes stuck with the plan, with which they've met with success for the past decade.

"Most people think, because they have a lot of feed, they will fatten their steers,' Mr Stubbe said.

"Whether we have feed there or not, we have stuck to it."

Stock were turned off regularly to the yards at Euroa and Yea, with lots put into the saleyards in August, December and January.

He said cows were bought in from Euroa and Yea saleyards, rather than breeding up heifers, which had a long turn around time.

Ms Stubbe said Mansfield agents bought a lot of the cattle and there was strong support from feedlotters. Smaller landholders were also repeat buyers.

The Stubbes said they also aimed to turn off quiet cattle.

"We drive around with hay on the back of our vehicle, so the cattle come to us and we give them a bit of hay, almost like a reward," Mr Stubbe said.

"It makes it easier for us to handle them in the yards."

The Stubbes, who have no other regular staff, said running cattle on the hill country contained both opportunities and challenges.

The early turn off of weaners allowed the cows to rest, between breeding.

"Our terrain is fairly steep, so in a lot of ways, it suits us to give the cows a bit of a rest," he said.

"We carry more breeders this way, as we are not having to fatten the steers, later on."

"That's an issue now, because there is a shortage of bulls," she said.

"We try and locate them, as best we can, on the level country, but we don't have a lot of it."

But one of the biggest advantages of the hill country was a regular water supply, from the springs, dotted around the area.

"There are little valleys that stay green and provide plenty of shade, you have to have good water and good shade," Ms Stubbe said.

The Stubbes said they applied superphosphate and lime to the paddocks, which were sown down on an annual basis, every year.

Ms Stubbe said they were also trying out new acid tolerant varieties, in conjunction with the local Landcare group. They had also introduced the native grass, microlaena.