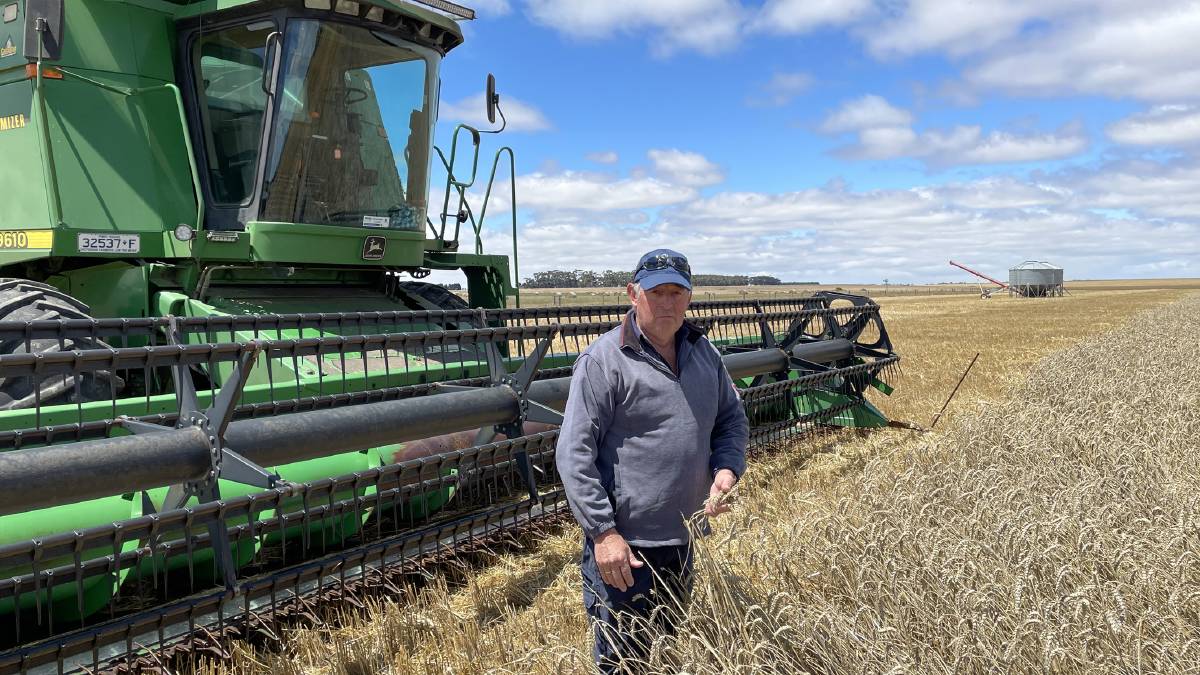 HOLD UP: Ian Porter said consistent light falls of rain had delayed harvest including this paddock of wheat, on the worst soils, that was yielding 4.5 tonnes a hectare.

Rain and continuing southerly winds have hampered harvest in the south of the state.

While growers, contractors and receival points wait with resigned annoyance for better weather, they are placated somewhat by strong yields so far.

Graingrower Noel Barr, Tatyoon, said there was a lot of dew in the mornings and it needed some hot weather to ensure a good run at harvest.

He said they were "getting a few days in, here and there".

There was about 320ha of their nearly 1000ha program left to harvest.

"We've done all our oats, canola and barley," he said.

"We have stripped wheat that's gone eight to nine tonnes a hectare and up to 10t/ha," he said.

He said they yields meant it was "extreme use" for the headers.

Mr McClelland said it had been a "tough harvest" and was about half done.

Southern Farming Systems operations manager Gina Kreeck, said January had been a frustrating month for growers in the Inverleigh, Streatham and Hamilton areas.

She said the canola harvest was the pick of the crops so far with good yields and oil content.

The wet weather in January had caused some quality issues that hit premiums.

Ms Kreeck said there were paddocks of cereals still standing.

At Lake Wongan, between Streatham and Beaufort, continued light rain - "hardly worth measuring" - was slowing harvest.

Ian Porter, Westleigh, Lake Wongan, said that after a year when rainfall totaled 700mm, rain at harvest meant they "just can't get a run at it".

"You wouldn't get wet in it if you stood outside," he said.

"We have to knock off early each day because it was just too tough for the header. They're short days, that's for sure.

New Year's eve they recorded 27.5 milimetres but some areas not far away got more than 100mm.

Mr Porter said they had completed about half of their 250 hectare cropping program.

He said quality was okay although wheat was lighter test weight than normal.

"Because of the rain we've only done two loads of wheat so far. One was AGP1 and the other APW1," he said.

In Victoria, while heat and rain events delayed harvest activity, grain was still being delivered in the Wimmera and Southern areas of the state.

"The Wimmera has had a very strong season, having clocked over 777,000 tonnes with a little more to go. Wheat, canola and barley yields have all been above average," GrainCorp's area manager in the Wimmera, Gerard Bibby, said.

"Canola, in particular, yielded exceptionally well - we heard of growers achieving between 3 to 4t/ha yields.

"While there have been a few delays with rain and cooler weather, growers in the Wimmera are overwhelmingly positive - for many, this is their fifth year in a row of having a strong winter crop.

"We want to thank every grower who has worked with us across another successful harvest and a big thank you to all of our local staff who managed a busy season very well."

GrainCorp General Manager of Operations Nigel Lotz said the company's focus had now turned towards sending the grain out around the world.

"The harvest not only reinvigorated many of our sites; it has also led to a strong export program out of our ports at Carrington and Port Kembla, in NSW, and Geelong and Portland, in Victoria. The four ports are largely booked out until September 2021.

"It's our first major export year since the drought really took hold so we're thrilled to be given the chance to 'stretch the legs' of our port facilities," Mr Lotz said.