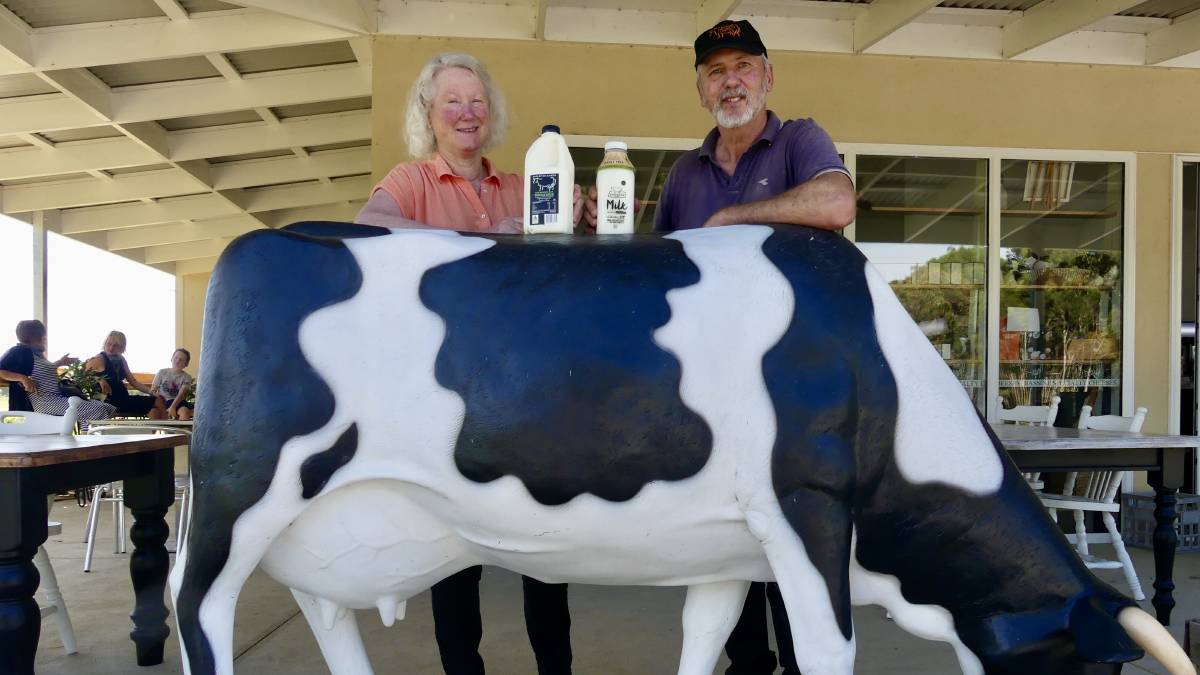 SAY CHEESE: Kaye Courtney and Glen Bisognin of Bass River Dairy produce a range of specialty cheeses and milk, which is supplied to the local area.

Glen Bisognin admits he never expected to be so busy when he took over the family farm and opened Bassine Specialty Cheeses in Glen Forbes in West Gippsland.

Along with partner Kaye Courtney, he opened the factory in 2014, which also has a cafe and shopfront.

"[Kaye] was just going to plod along here during the week and sell a bit of cheese on the weekends," he said.

"Well in the first couple of weekends we'd sold out by Sunday morning so it started to get a bit serious."

After starting with Camembert and Brie, the factory now makes a full range of hard and soft cheeses, named after the nearby towns.

He said there was also a strong demand for fresh milk, which is sold as Bass River Dairies.

The dairy farm had been operating since 1966 and the milk was sourced directly from the herd, he said.

"That started with me with a jug pouring into milk bottles," he said.

"It kind of grew really quickly, we weren't really prepared for that."

He said the products were not standardised or homogenised.

"Just like our full cream milk is full cream, it's not standardised to 3.9 per cent fat."

As well as selling direct to the public in the shopfront, the products are supplied to local shops, cafes and restaurants.

Mr Bisognin said there was a growing trend of consumers becoming more aware of where their food was coming from.

"You can get plastic cheese and you can get it a hell of a lot cheaper, but all our cheese is handmade so it's all got a cheesemaker who feels the cheese from start to finish," he said.

"And it starts before that - when we were milking it was a big thing about what the cows eat."

The farm also has an ethos to be as sustainable as possible, whether that is through packaging or travelling distance.

Products are only distributed to suppliers within a 100-kilometre radius and the shopfront promotes local produce.

"Is it New Age or is it back to old fashioned, let's be sensible about it," he said.

"We did want to bypass the big processors, especially the big multinational ones.

"We wanted to stay on the farm, it's a family farm and we've been here for 60-odd years.

"The advantage of that is we've provided 25-odd local jobs and that accumulates... it's the refrigeration mechanic, the electrician."

Providing year-round employment in an area known for seasonal tourism was an important consideration, he said.

"I'm a civil engineer, I can go get a job anywhere and get paid a hell of a lot more than here, and run some beef cows and that's it, but how would all the other families survive?" he said.

"There's not a great deal of work unless you want to work at the fairgrounds over summer.

"How does that keep all the other stores going?

"It's satisfying knowing you're holding your integrity in your product and you're helping other people in respect to full-time, real employment."

The business was forced to adapt in response to the COVID-19 pandemic, he said, and the decision was made to temporarily stop milking and instead partner with the last remaining dairy farm on nearby Phillip Island.

"It just got too much to run the herd here and try to run the factory," he said.

"We've known Adam and Annette Eldridge for quite some time, we know their quality and their workmanship.

"It's a small herd, we didn't want a factory farm."

Mr Bisognin said the changing regulations meant the cafe was stopped and restarted several times, but mail orders skyrocketed through the 'Click for Vic' campaign.

"We didn't have to lay off anyone and we actually took on two more people, another driver and another person who does bottling," he said.

More extensions are planned for the factory and milking will begin again too.

"We cannot meet a lot of our suppliers," he said.

"We definitely want to expand to take on some different packaging of our milk, which means a doubling of the factory size.

"We do not want to go into Coles or Woolworths specifically, we've got a business plan of not wanting to be involved with the big ones.

"We'll get milking back here again and we also want to pull in some small farmers and supply them.

"Because we're farmers we understand what you need to be paid, we offer quite a premium and it's a constant price."