Behind every top performing bull there is a deep cow family. 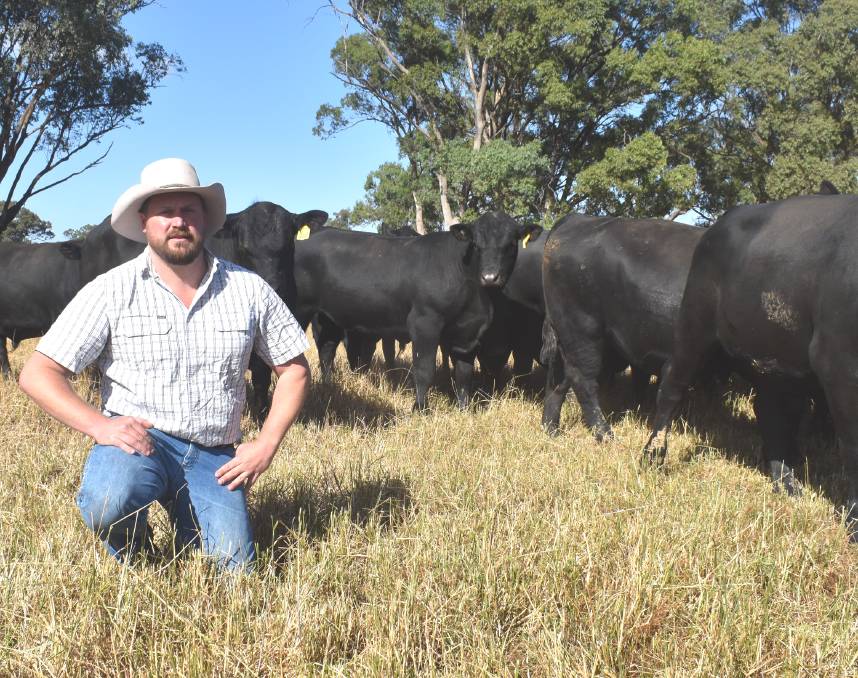 Bellaspur Angus stud principal Brenton Sessions, who is based at Balmattum near Euroa, has a healthy respect for the maternal side of his herd.

Coming into a fourth year of involvement with Stock & Land Beef Week, Mr Sessions runs the stud on the family farm, joining around 100 females.

The stud was first registered in 2013.

Before that, he had stud Holsteins.

"I've always had beef cattle as well and operated as an artificial insemination technician and then took some time off to herd-manage some large dairy herds in the western district," he said.

"I learned a lot about growing grass and the animal health aspects in intensive programs."

He said the stint in the dairy industry made him realise that the best beef breeders all had a dairy background.

"It's their appreciation of what cow structure and a maternal outlook looks like," he said.

The foundation of the herd was mainly Campbell's Farms and Anvil cows.

When selecting the male side of the breeding program, as an AI technician he had kept an eye out for leading bulls.

"I trialed a fair bit of everything at the start, but quickly realised that if you haven't seen the cow behind the bull, then it's probably not as good as the photo," he said.

"I focus heavily on the cow family behind the bull.

"Bull production is a by-product of a really good cow herd.

"It's all about breeding females, females will breed profitability for all levels of the chain."

"There's not an area where the bulls haven't performed.

"We focus heavily on commercial relevance and natural performance.

"By doing that and not overdoing grain, and a grass-based diet, the bulls are far more suited to go and work in more extreme environments."

He said his work in AI and pregnancy testing down the eastern seaboard allowed him to see a range of different environments, systems and genetics.

"You do get a grasp of how certain genetics perform in certain environments," he said.

"It has helped me make decisions on direction of the stud and the type of cattle I want to breed.

"We're honing in on a type of cattle that can go into any environment and perform."

Brenton Sessions said they purchased Prime Katapault K1 about six years ago, and marketed the bull through Alta Genetics selling more than 10,000 units of semen.

"He was a rare bull, with calving ease and early growth. So that meant we could change the focus from low birth weight to calving ease of the daughters. I don't think I've assisted a birth in four years," he said.

"To have 400 odd observations in that time and not touch one calf so it's definitely made a difference."

"He has been our lead sire for the past two years. He's still the top bull on the Angus breed index with proven data and calves on the ground.

"He's got calves in Australia, New Zealand and the United States as well.

"He came from an unknown stud, but he had a rock-solid maternal line behind him and quite predictable pedigree so we took the risk and he has come up trumps," he said.

"There is probably 17 sons of Dusty in our sale."

Mr Sessions said the stud herd comprised around 100 females plus some embryo work.

He said a reduction sale in October saw 30 females with calves at foot that averaged $4600 and topped at $11,000, gave him confidence for the bull sale.