A great season has seen prices for quality females jump at Camperdown. 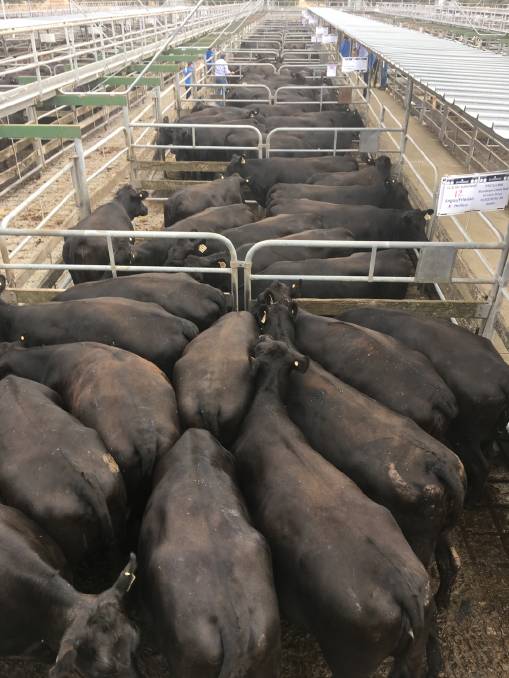 This year's annual Camperdown F1 female sale saw a massive jump in prices on 2020, with cows and calves going for as much as $3600 a unit.

Agents yarded about 1100 head of cattle.

Steve Lambert, Charles Stewart & Co, said it was a strong market right through.

"Last year it was tough going, whereas this year, it's been so good for everyone," Mr Lambert said.

"There were some excellent lines and they sold very, very well."

"A lot of local buyers were there," Mr Baulch said.

"The quality was very, very good this year, obviously reflecting the season."

"There were not a lot of those small, bucket-reared calves we saw in previous years, all the cattle had a bit of weight about them," Mr Howard said.

GS & MY Sutherland sold 12 head of 2.5-year-old Angus/Friesian-cross heifers, PTIC to a Mandayen stud Limousin bull, to commence calving on February 1, for $3000.

Sponsored by
It's been 12 months of rebuilding, for one Berringama bullock fattener.
Test
G-MW questioned over legality of channel herbicide use.
Test
Meatworks, local agents to the fore at Kyneton.
Test
The former party leader argues the Nationals should hold more power in the Coalition, highlighting Nationals cabinet ministers share responsibility for just 3.45 per cent of the total federal budget.
Test
See the latest from Day One of Stock & Land Beef Week.
Test
Take a look at some of the photos from Victorian farmers.
Test
Think it's been hot? Maximum temperatures have been 12°C above average in some parts.
Test
A look at how the sheep market is playing out.
Test