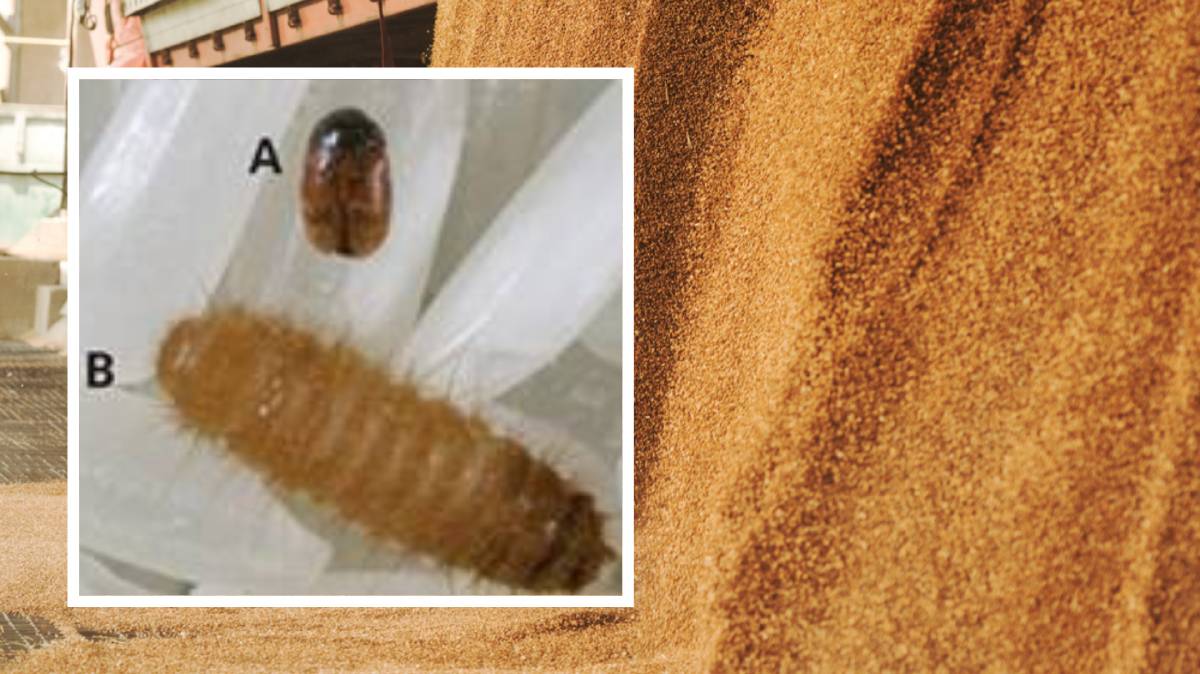 DANGEROUS PEST: The small khapra beetle, next to its large larvae form.

The khapra beetle is one of the nation's most dangerous biosecurity threats.

BIOSECURITY will receive a $14.5-million boost to protect Australia's borders against one the biggest threats to the nation's agriculture.

The khapra beetle is ranked as the nation's second most dangerous plant pest and the number one priority pest of the grain industry.

It's estimated an outbreak of the beetle could conservatively cost Australia $15.5 billion over 20 years.

The khapra beetle is highly invasive and feeds on stored products such as grains and dried foods, causing significant losses and posing human health risks due to contamination.

Agriculture Minister David Littleproud said the $14.5m initiative followed an increase in detections of the "devastating pest" at international borders around the globe.

"Like the brown marmorated stink bug, it has increasingly been found hitchhiking outside these food sources in containers and packaging," Mr Littleproud said.

"As a trading nation Australia cannot simply close its borders. Our biosecurity system must evolve and respond to changing risks.

"That is why we are investing $14.5 million over 18 months in new measures at the border."

The money will fund additional resources for containerised cargo inspections, rapid diagnostic technology and targeted surveillance at the border.

The khapra beetle has been recorded infesting more than 100 commodities including most dried plant products, such as wheat, maize, barley, rice, millet, sorghum, pulses, cotton, sunflower, sesame and spice seeds, and some animal products.

Adult khapra beetles are very small, oval shaped and range from a light yellowish brown to dark brown in colour - they can be confused with warehouse beetles.

It can survive as a hitchhiker pest in shipping containers for a number of years.

Due to its small size, its ability to survive for extended periods without food and its preference for inhabiting crevices it can remain undetected under floors and in cracks and crevices in shipping containers.

When conditions are favourable beetle populations can quickly increase in size and can contaminate any goods held within the container.

Anyone who finds a khapra beetle, or anything that resembles it, is urged to report it to the Department of Agriculture, Water and Environment on 1800 798 636.