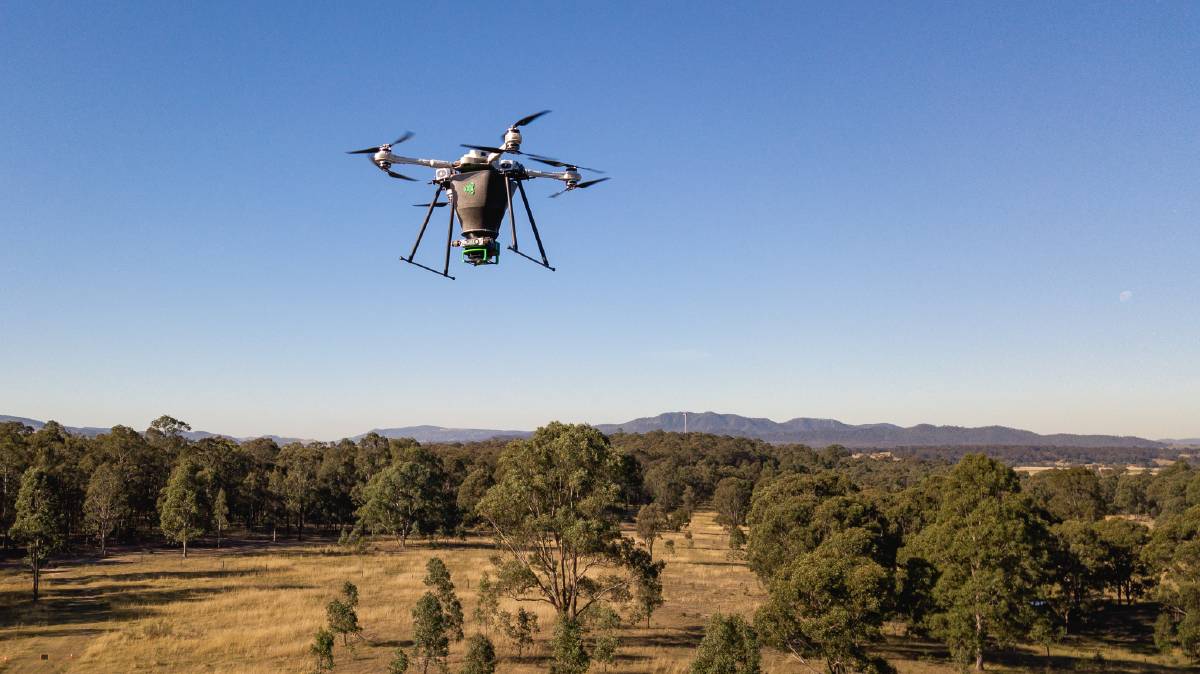 One of the Dendra Systems drones which will be used to disperse seeds. Picture: Supplied

Drones will be used to disperse seeds in bushfire-ravaged parts of Australia as part of a new plan to help our landscapes become more resilient to natural disasters.

Drones will be used to disperse seeds in bushfire-ravaged parts of Australia as part of a new plan to help our landscapes become more resilient to natural disasters.

It aims to halve the risk posed by fires and floods to Australia's 50 most vulnerable ecosystems by 2025 by improving research on critical flora and fauna, better mapping environmental assets and building an evidence base for Indigenous land management.

It is the second mission under the foundation's $70 million Fire and Flood Resilience initiative, which was announced in the wake of the devastating Black Summer bushfires.

Chief executive of the Fire and Flood Resilience initiative, Adrian Turner said there were "critical gaps" in our understanding of Australia's landscapes, especially around fuel loads, threatened species distribution and soil moisture.

"That makes it really hard to be able to make critical decisions around preventing disasters and also investing in restoring landscapes," Mr Turner said.

"After a disaster, we need better baselining measurements to both inform where we invest, but also to be able to quantify the impact after a disaster."

Mr Turner said there was an "enormous opportunity" to use emerging technologies to address these gaps.

This includes using drones not just for surveillance and reconnaissance but to plant seeds in remote areas, Mr Turner said.

"We're partnered with a company called Dendra Systems to accelerate the planting of seeds for reforestation through the use of drones," Mr Turner said.

"The use of drone technology can allow us to be more precise, it can also allow us to move more quickly, as well as accessing terrain and landscapes that are that are hard to access on foot and through other mechanisms."

The Minderoo Foundation will also help the Royal Botanic Gardens Sydney to expand its seed bank.

The gardens currently hold the seeds of around 64 per cent of NSW's threatened plant species.

But chief executive Denise Ora said the recent fires showed the need to have a reserve of more native flora.

"The biggest thing for us is because of the fire and also because of climate change, there are particular species that are at more threat in Australia or NSW," Ms Ora said.

"Think about particular rainforest species. They don't have the same integrity to survive fires, as other [Australian natives. And so what we're doing is looking at particular species in that rainforest to make sure that we're protecting them for the future."

Seeds from the Gondwana World Heritage rainforest are difficult to bank because they don't respond well to freezing, Ms Ora said.

"What will happen is if we can bank them, we can then ensure that through propagation they can be placed in other spaces throughout NSW where they can be protected," she said.

It comes after the Royal Commission into National Natural Disaster Arrangements heard access to data about flora and fauna was a "pervasive challenge" for environment and conservation groups, especially in the aftermath of the 2019-20 fires.

The commission urged governments to fund ongoing environmental monitoring and research, in order to fill important knowledge gaps on wildlife and ecosystem populations and distribution.

The Minderoo Foundation is also aiming to develop the technology to extinguish dangerous fires within an hour by 2025.

The story Twiggy Forrest's mission to save Australia's precious ecosystems first appeared on The Canberra Times.