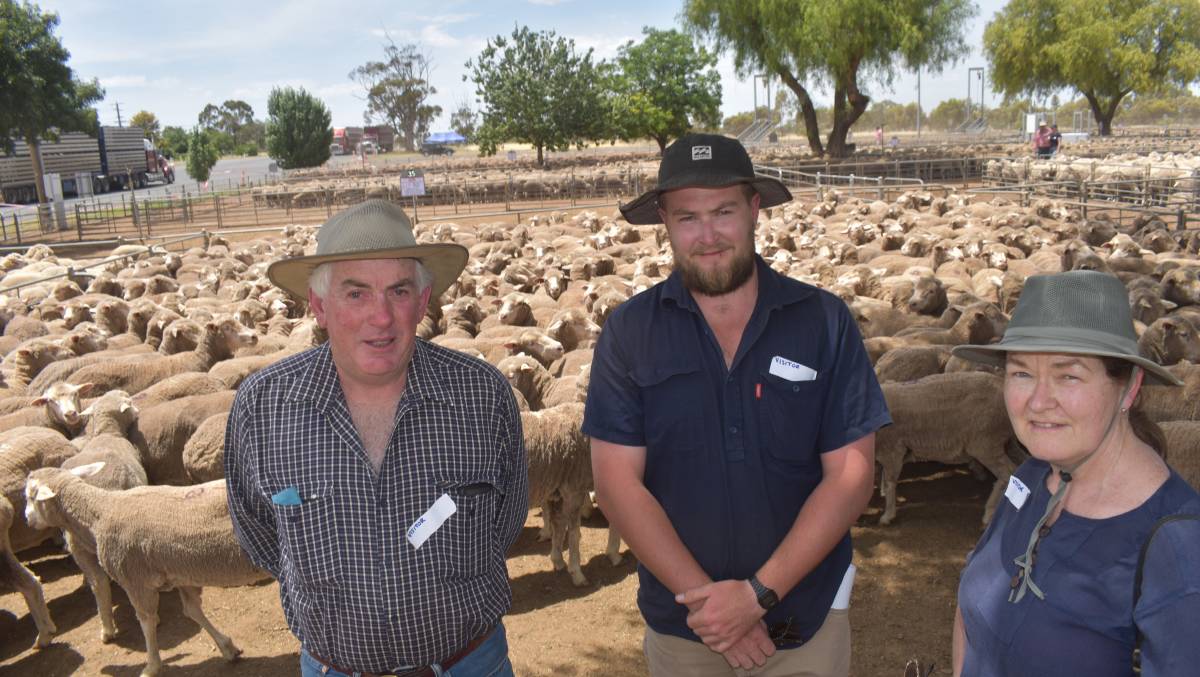 "The number of good quality sheep dropped off a little bit and there's a fair few headers going and it's a bit warmer today," he said.

Mr Thompson sale included a large number of first cross ewe lambs, that were annual drafts from local breeders sold each year at this sale.

The run of the ewe lambs sold to $355 with the majority selling above $300. The younger spring-drop and mid year drop lambs sold from $250 to $275 which was "quite satisfactory for their age".

Competition was "probably not as vibrant as it's been in recent weeks, although vendors were quite satisfied with their results", he said.

Of the Merino ewes the annual draft from Tamaleuca, Ouyen, made to $305 while the balance of the 1.5 year old ewes sold to $280.

"It was a pretty solid Merino ewe market, that got a little bit stronger as it went," he said.

There was a selection of older Merino ewes three to five year old that made $255 to $265, keenly sought after.

Mr Thompson said Merino wethers were keenly sought after and sold to $160, six weeks off the board.

"These are annual drafts of sheep that have performance records and are keenly sought after across the state," he said.

"That was quite satisfactory for their age - they were younger than the previous sale," he said.

He sold the sale started with a pen of 2.5 year old lambs, with a "big skin", that had already produced two lambs and which sold for $338. The pen was a July/August 2018-drop, April shorn and sold account GJ & W Cook to a Rodwells Euroa account.

The feature of the sale was the consignment of 3340 mainly Merino ewes and wethers forwarded by Greg and Fiona Simpson, and son Ben, Winjallok.

The annual draft included a pen of 412 Merino ewes, May/June 2019-drop, October shorn, Winjallok blood and bred, that sold for $279 to a previous buyer. The seconds of the line comprised 202 that made $244, also to a repeat buyer.

The Simpsons also sold 64 first cross ewe lambs that made $164 and the balance of 64 made $240. The five-year-old sold in one line of 375 that made $198 and were bought by a buyer from Skipton who had bought the ewes for the past five years.