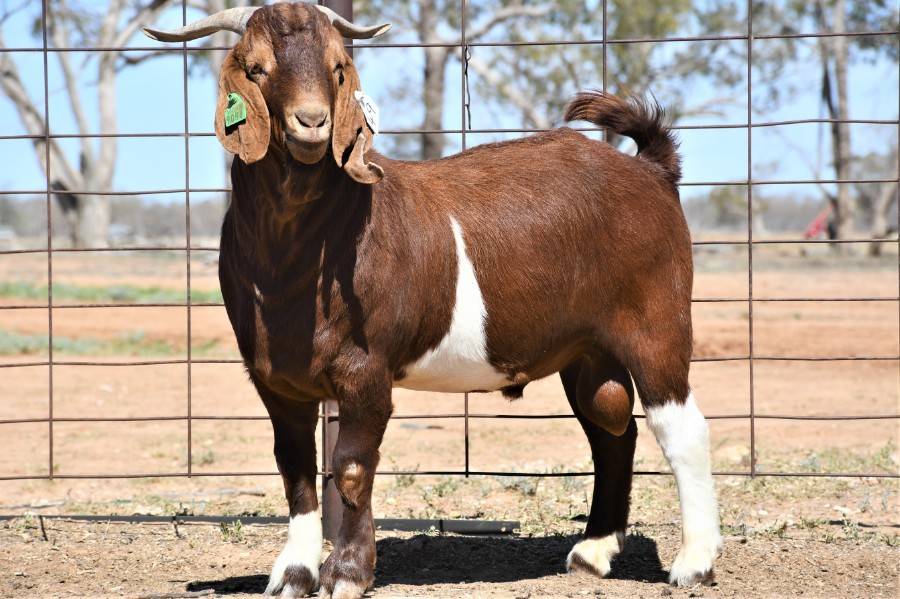 THE Australian record for stud goats was broken multiple times during the first annual Cobar Red and Black Goat Sale yesterday, when a premier selection of breeding stock from two of Australia's leading studs went under the hammer.

A full clearance of 49 bucks and 10 does was achieved by vendors, Bunnaloo Black Goat stud, Moama, and Rangeland Red Goat stud, Goodooga, who celebrated an overall sale gross of $272,400.

Previously the record sat at $5000 for a buck, but that record tumbled as prices kept climbing and a new record of $9000 made the history books.

A result that left the vendors absolutely thrilled after they did not know what to expect as it was their first sale.

Rangeland Red Tag 9094 was the top-priced ram from the Rangeland Red stud that now holds the Australian record after being knocked down for $9000 to the Moseley family of Etiwanda near Cobar.

Overall bucks topped at $9000 and averaged $4502, while the doe offering hit a $7000 high and averaged $5180. Both averages are believed to also have set new Australian records.

Registered does sold to a $7000 Australian record, with the top money being paid by Kelleen Station, Wentworth, for Bunnaloo's offering in Bunnaloo 191020.

The 13-month-old was a red, single born ET daughter of Jolleen Red M110 out of the Jolleen F F26 doe.

Kelleen Station in total purchased three does and a buck from Bunnalloo.

The sale was conducted by Nutrien Livestock Russell, with John Settree as the auctioneer.

The story You've got to be kidding, bucks hit record $9000 first appeared on Farm Online.