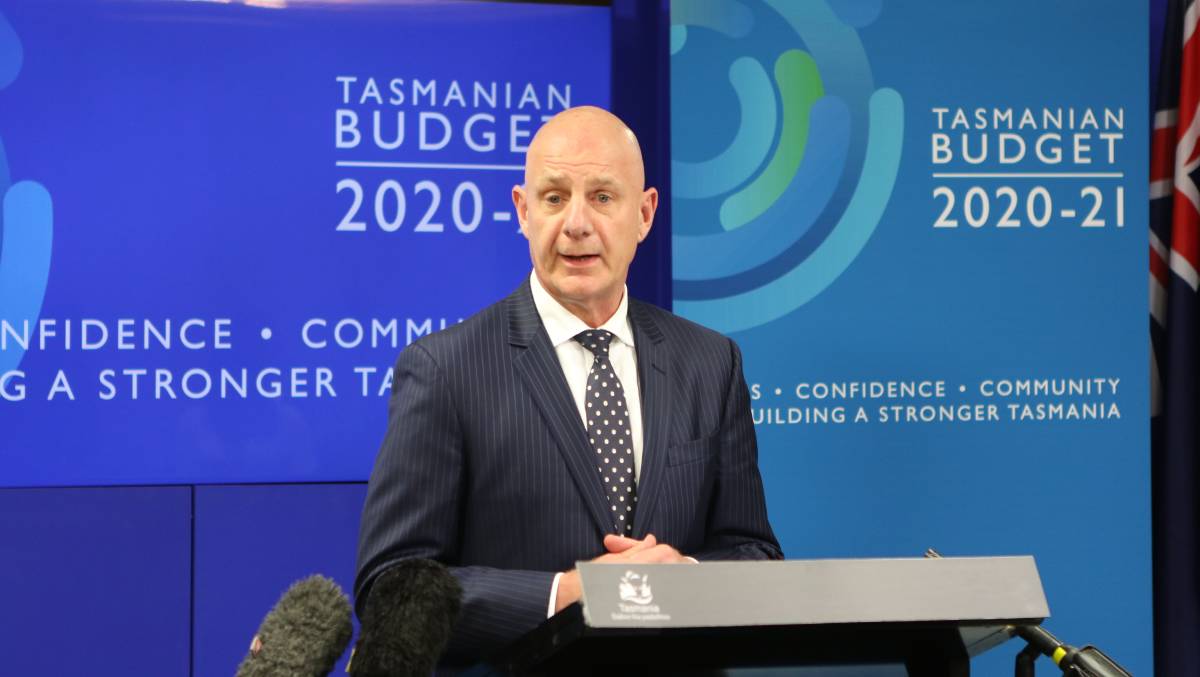 PANDEMIC SHOCK: Tasmanian Premier and treasurer Peter Gutwein had to grapple with the COVID-19 pandemic.

Tasmanian Premier and treasurer Peter Gutwein described the COVID-19 pandemic as one of the largest shocks to the state's way of life and economy.

Mr Gutwein said the budget was aimed at "Rebuilding a Stronger Tasmania", with debt set to fund a massive infrastructure program of more than $5 billion over the next four years, including $1 billion this year.

"The way to rebuild a stronger and more resilient Tasmania is to invest heavily to support jobs, to regain confidence and to rebuild our economy and our community," Mr Gutwein said.

Tasmanian Farmers and Graziers Association chief executive Peter Skillern welcomed the $5 billion funding for infrastructure, of which half would go to bridges and roads.

That included upgrades to the state's two arterial roads, the Bass and Midlands Highways.

"Obviously that will assist agriculture in terms of freight logistics," Mr Skillern said.

"On the back of the irrigation schemes that are going in, our production is increasing exponentially and we need up to to date infrastructure.

"There is no question that is the number one, big ticket item."

It was also good to see $15 million to advance irrigation schemes in the south-east further.

"That's predominantly for high-value crops, your vineyards, your orchards, your cherries, those sorts of things. The sort of money that's generated by those crops, is quite significant."

Mr Skillern said the $4.6 million for the Weeds Action Fund, to allow farmers, Landcare and other community organisations to tackle weeds, was money set aside to continue existing programs.

"This has already been running now, for over a year, there have already been two grant rounds, in that, so this is obviously confirming the funding, moving forward."

"I think what we were looking for, more broadly, was a sound, fiscal response and that's what we have got," he said.

"I would argue this year is not necessarily the year to try and cherry-pick various items.

"Let's hope, this time next year, we are in a better position and we can be a bit more selective, in what we'd like to see - overall it was a good, solid fiscal budget, for these times."

Mr Skillern said there was not an economist, on the globe, who could tell where the world would be in six months, let alone 12 months.

"It would be a very brave commentator who would make predictions about what we may need next year," he said.

"We would be well advised to watch, and wait and see."

There were a range of specific and general initiatives that would benefit the fruit industry, including the confirmation of the Agricultural Workforce Resilience package.

"We are particularly appreciative that the government didn't wait for the budget but started work on this in August,' Mr Cornish said.

The expansion of the South East Irrigation Scheme, was also very welcome.

"For the fruit industry, a reliable water supply is essential given all our orchards rely on irrigation," Mr Cornish said.

"This investment in reliable water sets Tasmania apart from other states, particularly those facing difficult climatic and bushfire challenges, and underpins the continued investment in intensive agriculture, including fruit."

Funding to uphold strong border controls for COVID-19 was important in itself, and also because it ensured that critical plant and animal biosecurity programs would not be compromised.

"These programs are essential to maintain our Pest Free Area status, upon which many of our trade activities are based.

The additional $2.65 million for the Tasmanian Trade Strategy was also welcomed, particularly to support the airfreight and export challenges facing cherry exporters.

"Some 60 per cent of our cherry production is exported, while our apple exporters, while small in what is a very competitive export market, will also benefit from further promotion and support," he said.

"In general the very significant investment in infrastructure will also support industry well into the future," Mr Cornish said.

"We look forward to an announcement on the TT-Line ship replacements as these vessels play a very important role in the timely and reliable supply of our berry, cherry, apple and pear and stonefruit trade to mainland Australia markets."

The Australian Logistics Council has also welcomed the invtsment in infrastructure.

"Investment in infrastructure combined with a collaborative approach with industry to planning for preservation of freight lands and corridors are key to a successful and functioning future economy. Providing clarity and security of the pipeline encourages Investment," ALC chief executive Kirk Coningham said.

"We applaud the Tasmanian government for committing to this plan."