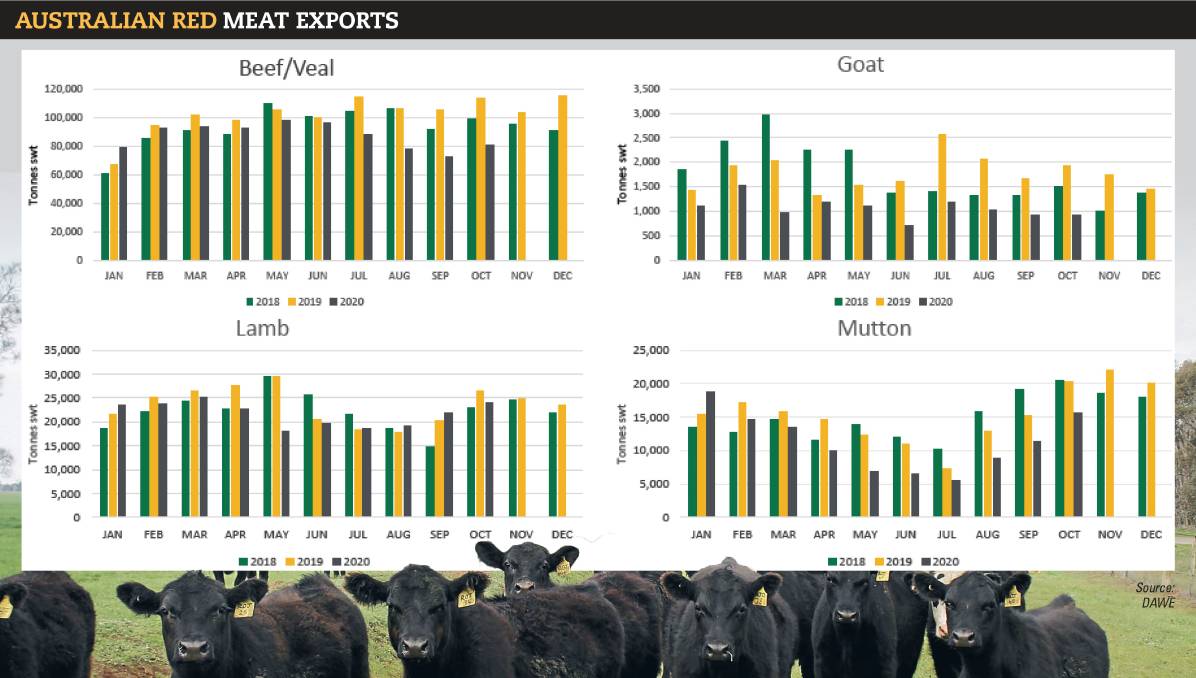 DATA: Red meat exports from Australia to China are 25 per cent down on year-ago levels. Graphs by MLA.

Exporters remain confident despite conflict at a federal level.

Victorian exporters from a range of agricultural commodities remain optimistic trade relations with China will be business as usual despite ongoing conflict between the Australian and Chinese governments.

Leaders from the red meat, wool and grapes sectors are confident demand will be firm, or in some cases stronger for the remainder of the year and into 2021, as China looks to Australia as a source of protein.

However, one international trade consultant is urging industries and companies looking to export to China to take a "softly, softly approach" when dealing with accusations of poor product quality or selling products below the cost of production, known as dumping, from Chinese authorities - even if they appear to be tedious or bureaucratic.

It comes as one Victorian MP, Nationals leader Peter Walsh, this week called on the Andrews government to "tear up" the controversial Belt and Road Initiative agreement, allowing Chinese companies access to Victorian infrastructure projects and to assist with Victorian exports into China, because "there's nothing in the agreement for Victoria".

"As has been proven by the current issues with China stopping timber exports, putting a tariff on barley exports, threats to the wine industry and to other horticulture products, this shows the Belt and Road Initiative has not delivered for the Victorian side of the deal," Mr Walsh said.

"The issue is that the Chinese Communist Government-owned companies are here building projects and getting benefits at the Victorian taxpayers' expense and I don't believe it's acceptable our industry should suffer and their industry should gain."

Under new laws set to pass Federal Parliament within weeks, Foreign Affairs Minister Marise Payne will have the power to cancel the agreement between Victorian and Chinese governments, aimed at improving national security.

But, a spokeswoman for Premier Daniel Andrews said the government had "always been focused on having a good relationship with Victoria's biggest customer".

"A good relationship is all about jobs and Victorian product going to China, but there must be mutual respect and understanding for mutual benefit," the spokeswoman said.

Australian barley continues to be restricted by an 80pc tariff in China after its government said the product breached trade rules because the cost of water for Australian barley farmers was subsidised by government - a dumping claim which was false.

Red meat exports to China are 25 per cent down on year-ago levels, while other countries such as North America (down 11pc) and Japan (9pc) are also back mainly due to supply constraints.

China is expected to be the third-largest importer of Aussie meat in 2020 with a million tonnes of red meat believed to be destined for the country, down from 1.4 million tonnes in 2019.

Meat & Livestock Australia managing director Jason Strong said it was important agriculture avoided getting caught up in "political discussions" and instead focused on trade and commercial relationships and "not doing anything that provokes any of the political tensions".

"Most of the issues we've had have been around labelling and standards compliance and we've had a number of processing plants that have had their access to China limited," Mr Strong said.

"We can't get involved in the political discussions and I think the best thing we can do is stay out of them.

"There are other industries that have been more impacted than the red meat industry but I firmly believe the best thing we can do is put our efforts into the trade and commercial relationships."

Mr Strong said the newly-signed Regional Comprehensive Economic Partnership, announced on Sunday, was a "big step" forward and an affirmation of the commitment to trade regardless of other disagreements at a political level.

The agreement was signed by the 10 countries in the Association of Southeast Asian Nations and ASEAN's free trade agreement partners: Australia, China, Japan, New Zealand and Korea.

"This is the largest free trade agreement that has ever been signed," Mr Strong said. 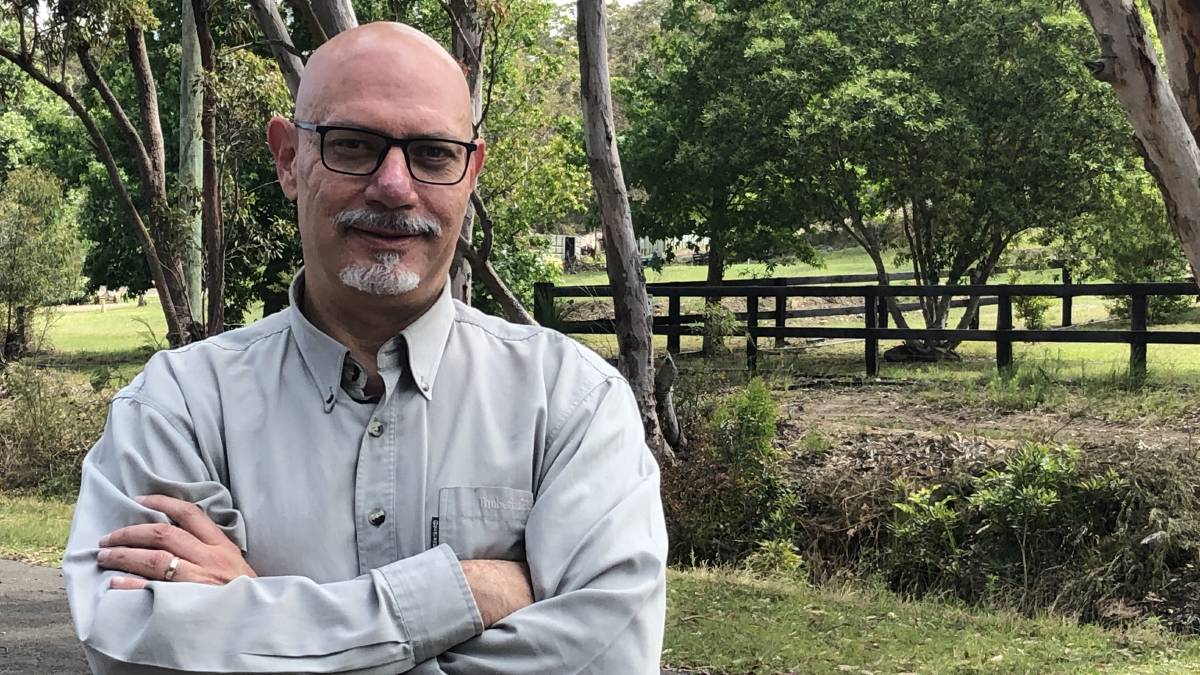 But international trade consultant Alistair Nicholas, who spent 13 years in China working with American industry associations including in agriculture to tap into the Chinese market, believed the agreement would have limited effect in the short-term.

"It might result in the standardising trade procedures between the counties but it won't stoke further demand or exports," Mr Nicholas said.

"In the long-term I think there is an opportunity for Australia to leverage this partnership by working with the other members to raise legitimate trade and investment concerns we may all have with Beijing."

Mr Nicholas said China had been "very selective" about Australian industries and specific companies it was targeting with such actions to cause minimal damage to themselves to keep Australia "on edge".

"China has not been happy with the way Australia has been dealing with it on certain issues, for instance calling for the independent inquiry into the outbreak of coronavirus," he said.

"At the time, Beijing's deputy ambassador to Canberra warned there could be trade repercussions."

Mr Nicholas said it was important Australia's agriculture companies were not totally dependent on the federal government for resolving such trade disputes, and encouraged companies to identify key players in China who could work and lobby the government for better access of their products.

"I think Australian industry associations need to be making similar efforts," he said.

"It's important for companies to take a 'softly, softly' approach, keep their heads down and comply with their requests from Chinese authorities.

"At the moment the Chinese authorities are making accusations of dumping or problems with quality of product so basically the government is asking for information about products.

"It's important we comply with those requests even though the bureaucracy can seem a bit tedious in their requests."

Australian Council of Wool Exporters & Processors executive director Peter Morgan said China had been the wool industry's "saviour in many ways" this year.

"China has been able to step in, whereas, the others like Italy and India have stepped back during the pandemic," Mr Morgan said.

"Our observation is there's no impact that we've seen at the moment in regards to government difficulties that has had an impact on the wool industry.

"Unlike other industries, the wool industry is going along."

Mr Morgan said a joint working party between the countries, formed over a decade ago to specifically address issues of common importance, would continue to work together despite the federal tensions.

"It's difficult to speculate and one can never be sure but we've not seen the issues that some other commodities have seen such as trade barriers like what barley has experienced," Mr Morgan said.

"The Chinese are our biggest export partner and we've always had very good relationships with our importers and exporters," Mr Scott said.