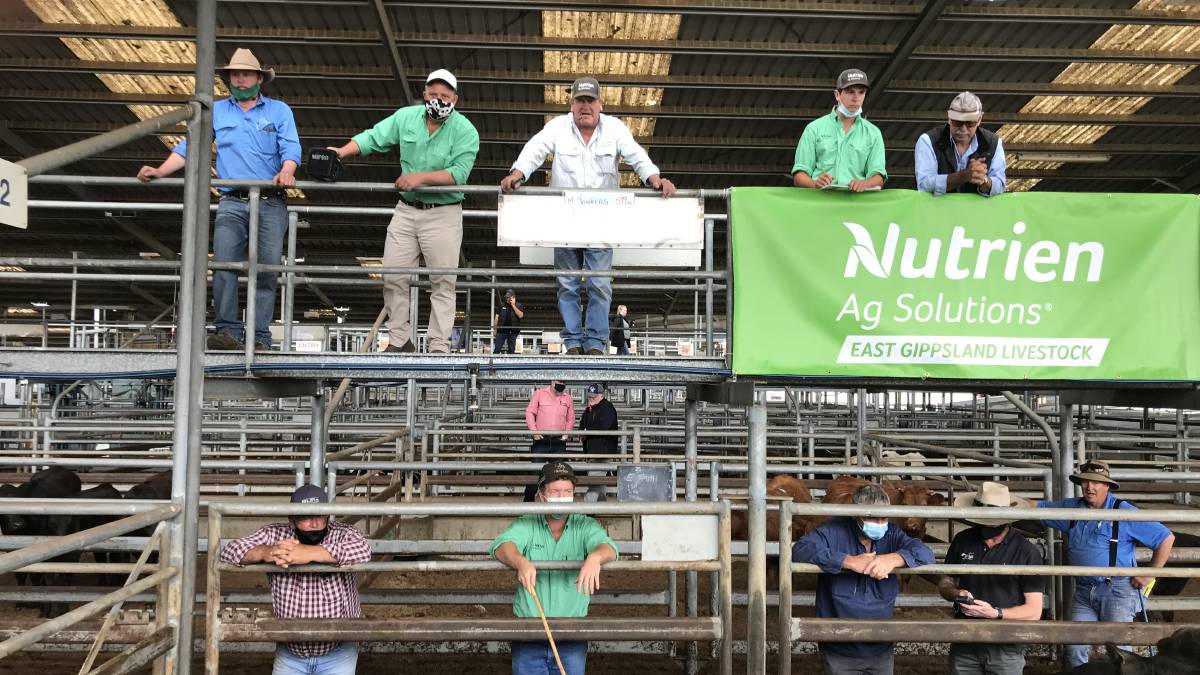 SALE-O: The Nutrien East Gippsland Livestock team sell a pen of cattle at Bairnsdale on Friday.

Drafts of quality-bred cattle were hard to source at Bairnsdale on Friday, however, prices maintained fortnight-ago levels.

Agents yarded 550 cattle for the fortnightly store market where cows with calves at foot sold to $3330.

Agents said prices were firm despite a lower quality yarding on offer compared to last month.

"It was a fantastic sale for the number of cattle that were here," Mr Fullgrabe said.

"Considering the quality wasn't as good and the numbers weren't about, it was a very strong sale."

Mr Fullgrabe said the sale was buoyant with cattle suitable for slaughter making significantly more during the store sale compared to the prime market a day earlier.

A feature of the sale was two pens of cows and calves sold by Jim Pendergast, Penderscourt, Benambra, which sold to $3300 and $3180.

"They were second-calvers but weren't as good as the first-calvers Jim sold a fortnight ago, but these cattle made more money, so it would be fair to say prices did rise," Mr Fullgrabe said.

"I thought it was a pretty mixed yarding of cattle overall," Mr Obst said.

"Cattle didn't display the breeding they did in other sales, but I don't think it had any detrimental impact on any of the competition."

Agents said South Gippsland bullock fatteners were particularly active during the sale, while feedlot and processor competition was scarce.

Meat & Livestock Australia's National Livestock Reporting Service said quality was good in the limited offering of heavy yearling steers, while there were fewer heifers on offer.

Agents yarded 181 fewer cattle than a fortnight ago.

The NLRS said the top pen of weaner steers sold to $1860 or 485c/kg for a pen of nine Angus steers weighing 390 kilograms.