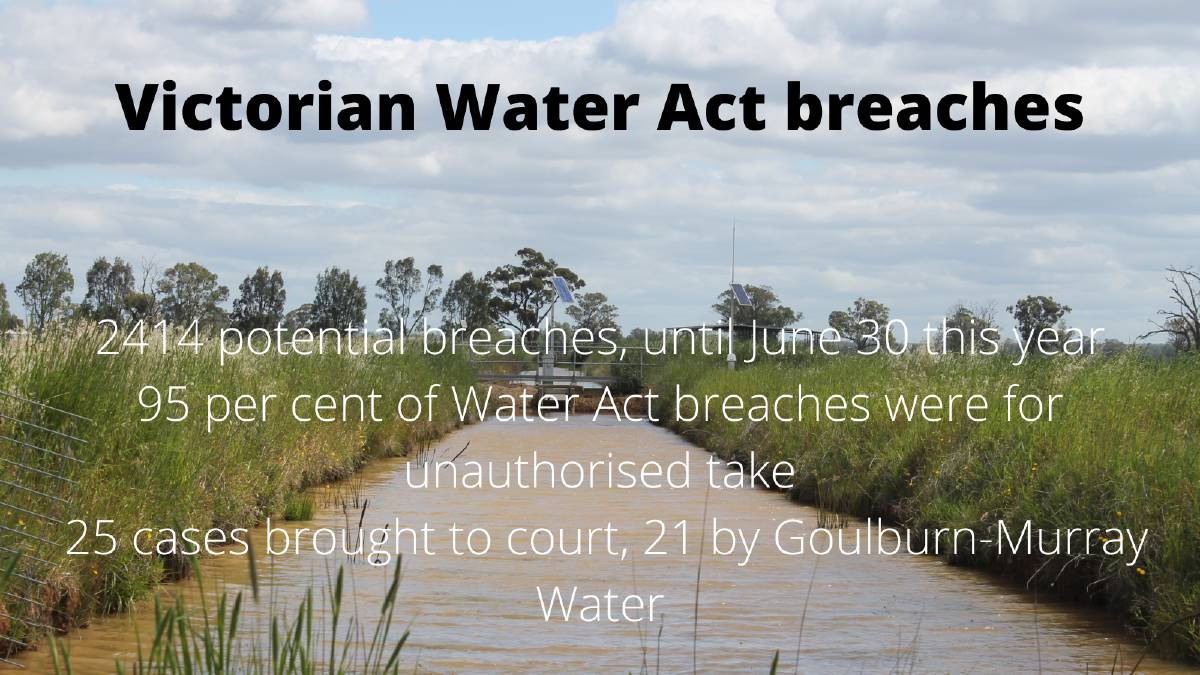 Water corporations with rural customers reported 2414 potential breaches until June 30 this year, of which 25 cases went to court.

Unauthorised take of water remains the most prevalent breach of the Water Act but few prosecutions have occurred as corporations seek to warn offenders first.

Breaches of the act were detected among less than 1.5 per cent of Victoria's 185,000 rural water customers, 98.5pc were for unauthorised take.

"The slight decrease in the number of potential breaches detected can be attributed to better use of data and systems to improve efficiency and target compliance risks, and greater proactive communication with water users about compliance," the Department of Environment, Land, Water, and Planning (DELWP) reported.

Most of the breaches were dealt with through verbal warnings, advisory letters or formal warning letters.

About 95pc of all potential breaches detected were in the northern Victoria, commensurate with the higher number of water users and licence holders in the region.

The rural water corporations brought 25 cases for breaches of the act to court.

Of those, 21 were brought by Australia's biggest rural water corporation, Goulburn-Murray Water (G-MW).

The Victorian government had also legislated to give water corporations more enforcement powers including issuing notices.

"This means we do not have to move to tougher levels of enforcement such as prosecution," he said.

This means we do not have to move to tougher levels of enforcement such as prosecution. - Warren Blyth, GMW water delivery services general manager

GMW has increased its number of prosecutions each year over the last four years and commenced 21 prosecutions in 2019-20.

This included a case in November 2019, where a Gunbower irrigator was ordered to pay almost $90,000 in compensation and placed on a 12-month good behaviour bond after using more than 200 megalitres in excess of his allocation under his water share.

Court, the final straw for authorities

DELWP reported the state's four rural water corporations had a range of enforcement options they could pursue.

Advisory letters and verbal warnings are usually the first enforcement action taken in response to a breach, followed by a formal warning letter, notice of contravention, reduce, restrict or discontinue water supply, or prosecution.

The figure was higher than the number of breaches detected, due to cases carried over from the previous financial year.

"The increase in the number of enforcement actions taken is a reflection of Victoria's strong commitment to zero tolerance and on water corporations' timely and resolute efforts to achieve zero-tolerance on water theft."

GMW started 21 prosecutions against customers for unauthorised take, interference with the authority's property and failing to comply with a notice of contravention.

"In line with Victorian government policies, we are determined to act against water theft in the interests of the vast majority of irrigators and water users who do the right thing," Mr Dalton said.

Victoria was working towards comprehensive meter coverage so that water users and the community can be confident that accurate measurement systems are in place for water management and accounting.

Historically water monitoring across the Goulburn Murray Irrigation District, including the use of Dethridge wheels, has not been accurate or met national compliance standards.

New meters helped with compliance, which was increasingly important with scarcity of water.

Water Minister Lisa Neville said it was important to protect all water users, the vast majority of whom were doing the right thing.

"Our recent independent review found Victoria's water compliance and enforcement system is robust and that the great majority of water users were already doing the right thing.

"For those that don't we've strengthened the penalties for water theft."

She said authorities were protecting against theft, ensuring users know when their account was running out, and speeding up enforcement so large volumes can not be pumped when accounts were negative.