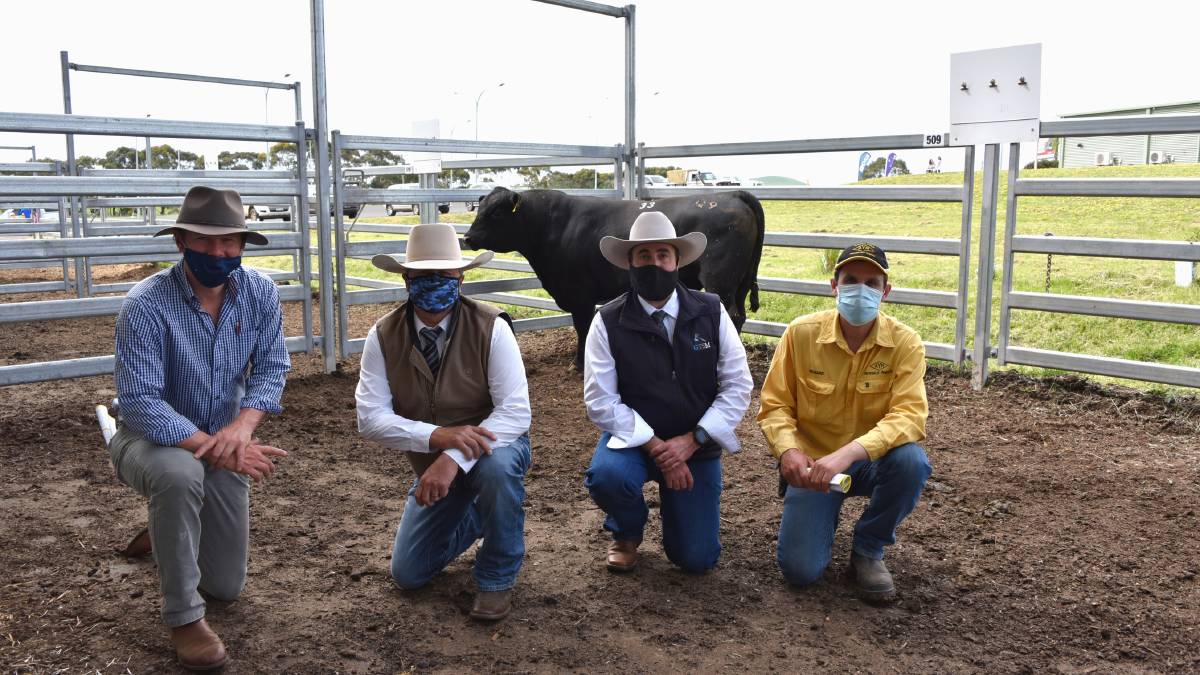 Prices at the Ayrvale dispersal reflected the high regard the genetics receive with demand strong for bulls and heifers.

Competition in the stands and cross border interest from NSW, Queensland and Tasmanian buyers for the draft of high indexing bulls and heifers was lively with over half of registered bidders securing their pick of the sale lots online via Elite Livestock Auctions due to COVID-19 travel restrictions.

"It was emotional to see the last of the cattle go but really happy with the interest from other studs and commercial breeders in our program today. They are going to good homes," he said.

"Over-all I'm very happy with how the sale went. It all went seamlessly and the strong online participation added another level of interest in the heifers and bull lots".

Purchased by Mark Lucas, Reiland Angus, Gundagai, NSW, the Lot 33 bull was high indexing with well-balanced Breedplan figures, including traits in the top one per cent for 200-day and 400-day weight, as well as an eye muscle area (EMA) of +13.1, top 5pc for 600-day weight and an intramuscular fat measure of +3.1.

Staying closer to home was the second top priced bull, Lot 38, Ayrvale Quarterback Q25 bought by Peter Burns, Plover Plains, for $11,500 for use in his commercial beef operation.

Mr Burns said the bull was "well put together and overall a very good bull. I liked his low birth weight and high EMA".

Having inspected the bull at the Ayrvale property prior to the sale, Mr Carter said the bull was worth the investment. "He is very quiet, well put together with no confirmational faults and has top figures throughout," he said.

Hotly contested the Lot 25 heifer's grand dam B32 was the dam of sire Ayrvale Bartel E7 and presented in the top one per cent for calving ease, marbling and heavy grain indexes.

"I'm delighted to secure her. She is a very well-bred heifer with great carcase attributes and beautiful phenotype, and very high in IMF (+4.4) which is what the industry wants," Mr Barnett said.

"We run a small herd of very elite performance cattle at our Westbury stud and a female like this rarely comes along with the statistics this heifer has. She is a real foundation female and destined for our IVF program at Geelong's Dr Richard Fry's IVF Centre to be put to multiple sires before heading to home to Tasmania," he said.

Taking the opportunity of the stud dispersal, bulk buyers in the heifer lots, Tom and Olivia Lawson, Paringa Livestock, assembled a nice draft of five females for an average of $3650, and a top of $5500 for Lot 12, a GAR Prophecy daughter.

"We're happy to secure these well-balanced heifers to add another foundation line to our herd. The heifers' combination of high feed efficiency and fertility traits will be a great addition to our Angus and Stabilizer® programs," Olivia Lawson, co-stud principal said.

"They were a good fit. We were the original finder and owner of the great Ayrvale Bartel E7 so had identified the uniqueness of the Ayrvale program some time ago. These females offer some different lines to E7, but still represent Richard's disciplined approach of breeding cattle that excel in the important traits across the board," Mrs Lawson said.

The sale "went better than I expected", Mr White said.

"It's hard to pick the interest in individual lots going into the sale and sale days always throw up a few surprises," he said.

"I'd like to thank existing and new clients support over the years and look forward to seeing the new cattle they bought today bring value to their herds.

"I've been getting good feedback from clients who bought from the June sale with invitations to look at how the cattle from today's sale are performing over the next few years.

"Thank you also to Michael Glasser, James Brown, Xavier Bourke, the TB White and CVLX teams to accommodate something out of the norm being the first stud stock sale at the Ballarat saleyards."

Joint auctioneer, Michael Glasser, GTSM, who has been working with Ayrvale Angus for the past four years, said the sale result was "a very, very good outcome" and "well deserved by Richard and Janelle for the effort in the presentation and quality of the cattle presented today".

"Stage 1 in June was exceptional and today was nice tidy up with the young bulls heifers offered," Mr Brown said.

TB White Sons' Xavier Bourke, was pleased with the level of local support shown from cattle breeders from throughout the Ballarat District.

Mr White said it had been a good time to sell so that they could focus more on other on-farm and off-farm work demands.

"With the closing of one chapter we are looking forward to be moving into the next chapter of the Ayrvale brand," he said.

Mr White said he plans over time to build the Ayrvale Angus brand into a premium commercial cattle brand selling high carcase value steers as well as select females at the annual special female Sale in Ballarat each February, along with marketing hay and seed under the Ayrvale Farm brand.