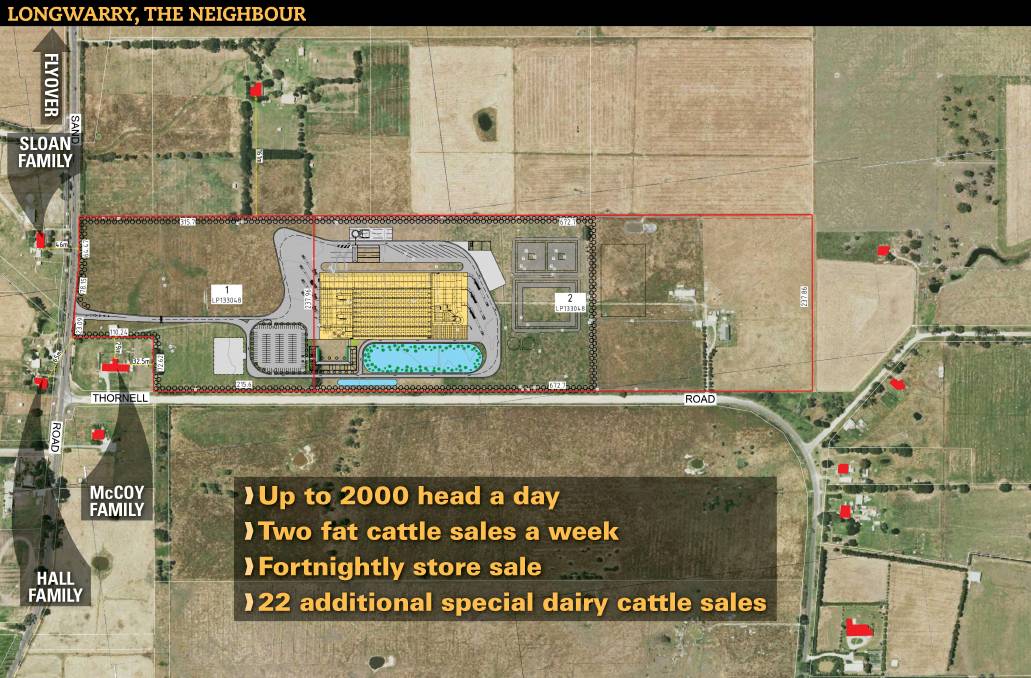 OVERVIEW: The proposed Longwarry saleyard showing the cattle pens in yellow and the traffic zones in grey, with the wastewater treatment in blue. Each red dot represents a residence within 500 metres of the activity zone.

Nearby residents of a proposed West Gippsland saleyard have criticised a decision by Baw Baw Shire Council to grant a planning application for development at the Longwarry site.

The council voted in favour to allow the development subject to a string of conditions at its ordinary meeting on Thursday night, ultimately allowing the $13 million project to go ahead.

But a group of residents close to the Thornell Road premises say they will vie to have the decision overturned when the matter heads to the Victorian Civil and Administrative Tribunal next year.

Resident Melissa McCoy, who is a part of the community group No Saleyard for Longwarry, was disappointed by the council's decision and said she felt residents' views were shunned.

"The council has shown big business and developments take precedence over the residents of Longwarry," Ms McCoy, whose residential property borders the proposed site, said.

"Councillors made the decision to grant the application with the understanding the matter would go to VCAT no matter what the decision was ... but we are concerned about the modelling used to grant the permit."

The proponents of the facility - a consortium of farmers, livestock agents and investors under the name Longwarry Saleyards Pty Ltd - announced in August 2019 they had bought the 23-hectare site and planned to build a saleyard in Baw Baw Shire Council.

The new facility is expected to rival competition and business from the Victorian Livestock Exchange, which operates the existing saleyard at Pakenham 30 kilometres away, and has plans to build a new facility at Bunyip North when Pakenham closes.

It is estimated the Longwarry complex would have a throughput of up to 132,000 cattle annually.

Ms McCoy said despite Environment Protection Authority approval for the Longwarray site, residents were concerned with modelling used to help strengthen the case for the complex. 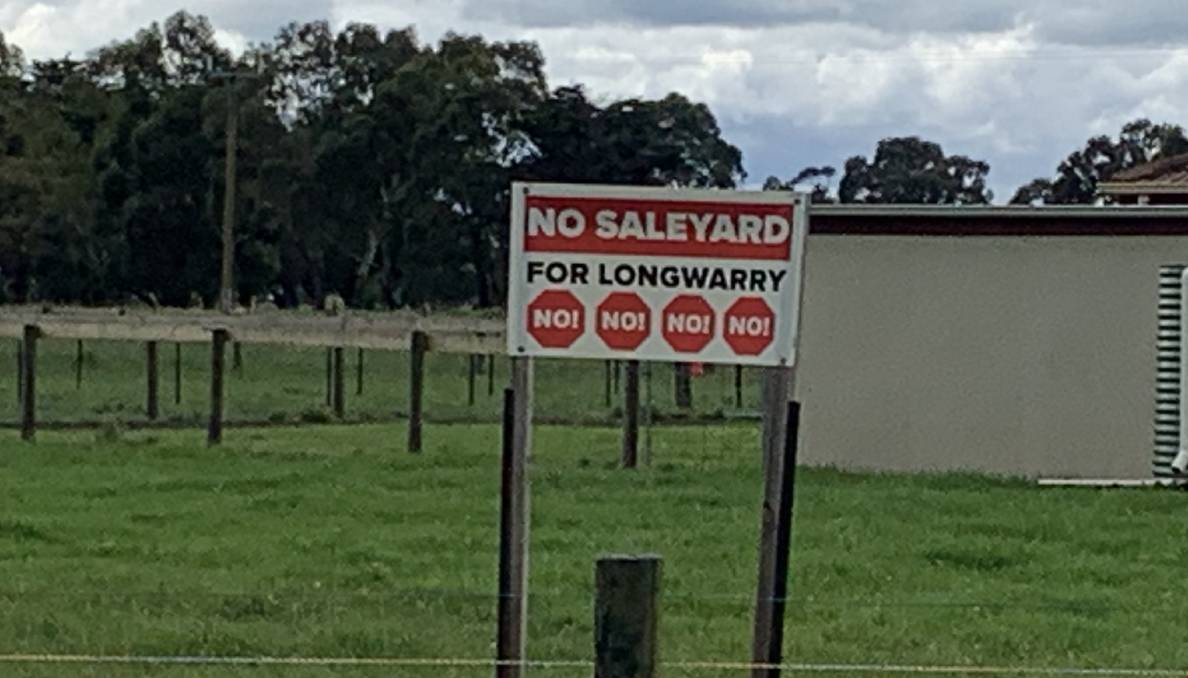 "Our biggest concern is that the modelling used by the Longwarry saleyards is based on the saleyard at Mortlake," Ms McCoy said.

"They are completely different sites and here at Longwarry, houses are much closer to the yards compared to Mortlake.

"We will have to have a 3.8-metre wall around our house to help with noise and odour and the EPA has said that has to be built otherwise it wouldn't approve the works approval but we feel it's unfair for a saleyard to be built so close to homes."

Related: Longwarry locals say 'Not the right place for a saleyard'

According to Ms McCoy, No Saleyard for Longwarry has the financial backing of a "large corporation" which will foot the bill for an independent analysis on the environmental implications the site could pose should it go ahead.

Ms McCoy declined to confirm the name of the corporation.

"The saleyard have had ample opportunity to work with us and listen to our issues and they have dismissed everything so going forward our objective is to stop the saleyard going ahead at this site," Ms McCoy said.

Another nearby resident, beef farmer and hay and silage contractor Gary Mason said the location was not suitable for a livestock saleyard.

"If this goes ahead, it will destroy all the properties around it," Mr Mason, whose 22-hectare property also borders the site, said.

"We don't have mains water, we rely on tank water, and if this saleyard goes ahead we fear all the dust and pollution could contaminate our drinking water which we get from our roofs.

"We also have serious problems around the area flooding and that's been an ongoing issue for the 70 years I've lived in Longwarry."

'Most up-to-date selling centre in the world', says proponents

Longwarry Saleyards Pty Ltd chair Greg Price said he was pleased with EPA and Baw Baw Shire Council's decision to support the project, which if approved at VCAT, will commence ground works in spring 2021.

"We believe the approval of this facility will give South and West Gippsland and not just the Baw Baw Shire the most up-to-date selling centre in the world and this is about farmers and agents taking control and giving themselves a guaranteed future for competitive marketing for their livestock," Mr Price said.

Mr Price said the consortium had made a number of changes to the project to address residents' concerns.

"One of the major changes was removing the planned treatment pounds for the truck wash and we've replaced that with ... a fully enclose treatment plant," Mr Price said.

"Quite often people throw up the Ballarat yards as an example due to bad odour ... but we are not proposing to sell sheep at this complex on a hard floor which is where Ballarat have had odour problems.

"We are very similar to the current VLE yards at Pakenham in that the cattle will be on a soft-floor yard and undercover and the only wash that will come from the yard is the truck wash."

Eight of the nine Baw Baw Shire councillors voted in favour of the amended planning permit.

The permit will allow the development of the saleyard and associated buildings along with the construction and display of a floodlit business sign along, the removal of native vegetation and other work.

Baw Baw Shire Council said a series of new conditions had been added to the planning permit to reduce the effects on nearby residents.

The conditions relate to complaint handling, restricting operating hours of the site's truck wash and sales, preventing livestock from being loaded or unloaded on Saturdays and Sundays and changes to sound walls to improve visual amenity.

Speaking at the meeting last week, Baw Baw Shire councillor Darren Wallace said the decision to grant the application made "too much common sense".

"Baw Baw Shire is built on the back of its agricultural sector which has delivered economic benefit and jobs to the area for many years," Cr Wallace said.

"We've heard from many who don't want this proposal to go forward.

"The applicants have put forward changes that should soften the change in the landscape and further separate the [saleyards] from the existing residents which in my opinion should be a bonus."