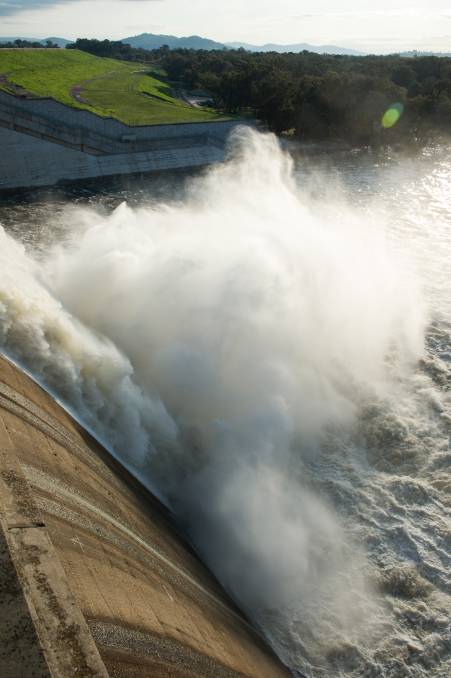 MORE RAIN: The Hume Dam spilling - more rain is predicted for the north-east this weekend.

It's the north-east's turn to get the latest La Nina soaking.

BoM senior hydrologist, Karen Hudson, said there were flood watches in place for the north-east and parts of Gippsland.

"We will be monitoring the conditions over the weekend," Ms Hudson said.

"Some parts of the state are a lot more saturated than others and we had some flooding last weekend, in a similar area.

There’s been widespread rain this week, particularly over the southern ranges so things are looking up for water allocations on the NSW and Vic Murray. In the past week, our storages increased by 142GL to 58% capacity. There’s more in the #River#Murrayhttps://t.co/ypoHtOTTxtpic.twitter.com/L2QltIrS5G

Flood watches had been issued for the Upper Murray, Mitta Mitta, Ovens and King Rivers, Goulburn River tributaries and the Seven and Castle Creeks.

There was already a minor flood warning in place for the Kiewa River.

In Gippsland, watches had been issued for the Mitchell, Macallister and Latrobe Rivers.

"Another part of the state that is very wet is the south-west, but they are not so much in the firing line, for the rain, this weekend," Ms Hudson said.

BoM senior forecaster Michael Efron said storms had occurred over parts of the north-east and they would extent further south.

"We are looking at falls of around 20-40millimetres across the north-east ranges, posibly into the upper parts of the Yarra River catchment, and up to 50-70mm over those north-eatern parts," Mr Efron said.

Storms were most likely to occur on Saturday morning and into the early afternoon, but that would then ease.

"There will be scattered showers over mountain districts, easing from the west."

The weather would then cool, with temperatures into the mid-teens in the south.

"The good news is the warmer weather does return for Wednesday and Thursday."

A low is expected to develop along the trough over western Victoria overnight Friday into Saturday, moving eastwards across the state during the day and reaching the Tasman Sea at night.

The low will continue to move east during Sunday as a ridge of high pressure extends over Victoria from a high in the Bight.

The high will move over Bass Strait on Monday.